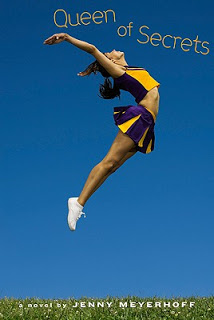 Because my debut YA, Queen of Secrets (FSG, 2010), is loosely based on the biblical story The Book of Esther, all the main players were predetermined: Essie Green is Esther; Austin King is the king; Micah is Esther’s relative Mordecai; and Harrison is the villain Haman. That seems like a pretty manageable cast.

However, because I’d decided to tell this story for young adults and set it in a high school, I needed more characters: the football players, the cheerleaders, Essie’s friends and her family.

I wound up with a lot of characters, and a lot of work. First, each character needs to be three dimensional. Second, every time you add a character, you are adding not only one new person into your storyline, but several new relationships. Sometimes I felt like I was writing in a pile of tangled spaghetti!

One piece of writing advice that’s always stuck with me is that every character is the star their own story, just like in the hysterical Tom Stoppard play “Rosencrantz and Guildenstern are Dead.”

This isn’t to say that every character needs their own subplot, but secondary characters can not merely be props for the main character. I consider a couple of tools crucial to getting to know my characters. I always begin with the character brainstorming worksheets I have posted on my website (PDF).

Once I have the basics of my character down, I turn to Victoria Schmidt’s book 45 Master Characters (Writers Digest, 2007). I find it really helpful to think about what personality archetype each of my characters falls into; it’s a good overarching guideline to behavior.

Once I’ve done that, I’ll delve into juicier things like journaling as each character, writing a theme song for each character or interviewing my characters.

As important as all this is, I really think that second item I mentioned–the one about managing all the relationships–is the true headache, I mean challenge, of writing a large cast of characters.

When determining those relationship dynamics I thought about the history between characters. Hayden’s known Austin forever but just met Essie over the summer.

I also looked at the status differences between characters; Austin has the highest status in their group, so Hayden looks up to him a bit, but Essie is rather low on the social ladder at first. Hayden feels quite magnanimous towards Essie and takes her under her wing.

It was also important to note whether there is a power imbalance. Does one character want something from another?

While all this might seem like a lot of extra work, it pays off many times over. It’s so much easier to write when you know your characters well. Hopefully, it also makes your book a more enticing read!

From the promotional copy for Queen of Secrets: “Fifteen-year-old Essie Green cannot believe her luck when Austin King asks her out. He is the captain of the football team and the hottest guy at Pershing High School. Unfortunately, as their relationship heats up, so does a rivalry between Austin’s best friend Harrison and Essie’s estranged cousin Micah, an observant Jew. Essie is forced to decide where her loyalties lie. With a family member she barely knows, or the boy she’s beginning to love?”