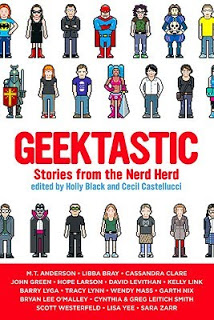 My contribution is “The Wrath of Dawn,” co-authored by Greg, which is a love letter of sorts to little sisters as well as fans of “Buffy: The Vampire Slayer” and (to a lesser extent) “Star Trek: The Next Generation.”

But more than that, it’s a tribute to the long-standing tradition of bringing in a teen character to add more youth to a show and, in the depiction/execution, somehow vexing a fair portion of the fan base.

As YA authors, it occurred to us that maybe we should be on the side of the awkward teen rather than those scorning him/her. And maybe everybody else be should, too.

Since Geektastic was first released last year in hard cover, it’s been a treat to discuss it with YA readers, many of whom have first come to “Buffy” through syndication, DVD releases, graphic novels, or the “Buffy: Season Eight” comic from Dark Horse.

I must admit, I envy them.

Imagine seeing “Buffy” from season one, episode one for the first time!

“The earth is doomed!” — Giles

Whether you’re a former, current, or future geek, or if you just want to get in touch with your inner geek, Geektastic will help you get your geek on!