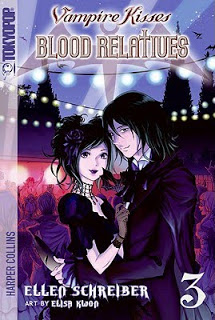 I was what you would call a “reluctant” reader. I didn’t enjoy reading because, unfortunately, I didn’t find many books that I could relate to. There wasn’t the fun YA market there is today.

I did like A Wrinkle in Time by Madeleine L’Engle (Crosswicks, 1962).

I read a YA book that was flip, fast and fun, and I thought, “I could do this.” I’d started a novel that never went beyond 30 pages. I changed the characters to teens and finished it in six and a half weeks.

I was very lucky. When I finished my first book, Johnny Lightning, my brother sent it to his Belgium publisher, Facet. They published it, and I was ecstatic!

It took a few years before I got published here in the U.S. An editor had just moved to HarperCollins and was taking unsolicited, unagented manuscripts. I sent my book Teenage Mermaid (2003) to her, and she published that along with Vampire Kisses (2003) and Comedy Girl (2004).

Congratulations on the rock-star success of the Vampire Kisses series (HarperCollins, 2003-)! Could you tell us a little about the books?

You are too kind! Wow. I wrote Vampire Kisses in 1998. I never dreamed it would become a series. After it was published, my editor asked for two more books. I’m currently writing VK 8.

What was your initial inspiration for the series?

Three things. An image, a character, and an obsession.

I wanted to write a book about a girl who was feisty, headstrong, fearless, and confident. I saw two goth girls swinging on swings in my neighborhood and loved the image. I thought maybe I’d write a poem and call it “Dark Angels.”

Instead, I decided to marry the character with the image and the girl would be a goth. Then I needed something else. I wanted her to be obsessed with something, and vampires popped into my head.

But I wanted to write about a vampire without the blood and gore. I wanted to focus on the romance of vampires. What made a vampire need a girl for all of eternity.

What was the timeline between spark and first publication, and what were the major events along the way?

Not too many. I just sat down and wrote it. I asked my dad about some vampire lore–as he’s really into the Universal Monster movies. Other than that, it just wrote itself.

What inspired you to branch into graphic novels?

I was lucky. Tokyopop (a leading manga publisher) and HarperCollins were joining for a manga imprint. A TP editor was looking through the HC catalogue and spotted Vampire Kisses and thought it would be a good manga. I still thank him to this day for that moment!

What is the writing process like for the graphics?

I write the whole story in an outline form and as much dialogue and anything else I can. Then a scriptwriter transforms it into a script. We tweak it as we go, and once the art is finished, we still have to make sure the language matches.

What advice do you have for fellow series writers?

I write the stories as I go–since I didn’t think about a series when I wrote the first book. I imagine if you know you are writing a series ahead of time, you can write an outline of the whole series. But for me, I write more organically and things happen as I’m writing. So I guess it just depends on your style.

Why spooky stories? Are you a spooky person?

I love scary movies. My mom didn’t let me watch them when I was growing up. So I’m making up for that in my adult years.

What other stories/books do you want to tell us about? 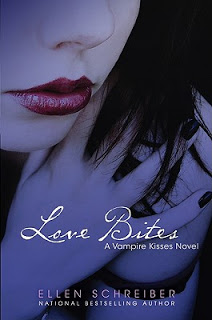 Vampire Kisses 7 – Love Bites was out May 18th. It is about what happens when Alexander’s best friend, Sebastian, comes to Dullsville.

Also, Once In A Full Moon. It is a new series that will debut in January 2011 about a hot and heroic romantic werewolf.

So far, as a reader, what is your favorite tween/YA novel of 2010 and why?

I don’t read when I am writing–which is most of the time. I like my thoughts to remain my own, and I don’t want anything influencing them. Sometimes I do read manga as it is a different genre.

What books by other authors would you recommend to your own fans and why?

Starcrossed by Mark Schreiber (Flux, 2007) It is hip, edgy, and a great story, and I’m not just saying that because he’s my bro.

I love to shop for funky stuff, Hello Kitty, and I gossip about celebrities with my best friend. I’m always searching online for new and fun stuff to add to my vampire and quirky collection. I also like to make amigurumis (Japanese crocheted cuties) and watch cool movies with my husband.