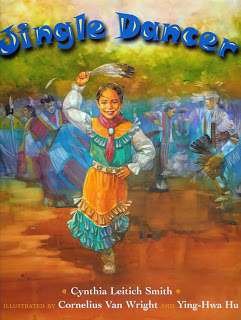 My first book, Jingle Dancer, illustrated by Cornelius Van Wright and Ying-Hwa Hu (Morrow/HarperCollins), was published ten years ago. From the promotional copy:

Jenna, a contemporary Native American girl in Oklahoma, wants to honor a family tradition by jingle dancing at the next powwow. But where will she find enough jingles for her dress?

I wrote the book for a lot of reasons.

First, I wanted to share a daily-life story about a contemporary Native girl.

So many Native-themed children’s books, to this day, are historicals. And I love a great historical story, but the balance had tipped too far in that direction. It suggested that Native people existed only in the past, which is not true. We are citizens of Nations with a past, a present, and a future.

The illustrations reflect diversity within Native America by including characters who’re also of European and African-American heritage. In fact, it’s one of the few books reflecting Black Indian characters wherein their ethnicity is incorporated without commentary.

The story also offers a wider socioeconomic view of Native folks than we normally see in children’s books. The main characters include a young attorney.

Above all, it’s the story of Jenna, Grandma Wolfe, Great-aunt Sis, Mrs. Scott, and Cousin Elizabeth. And of course a jingle dress!

The book was dedicated to my much-beloved Great-aunt Anne, who sadly is no longer with us. I had the privilege of living with her when I was younger. And oh, my! We had such fun. I hope that when young readers turn the pages, they feel the love we shared.

And finally, I’m forever appreciative of the efforts and caring exhibited by the amazing illustration team and our wonderful editor.

From the Illustration Team

I can’t believe it’s been 10 years since Jingle Dancer was published. But the evidence stares back at me when I look at the photos we (Ying-Hwa and I) took of the jingle dancers at a powwow we attended as a family.

Our kids were in some of the pictures, and they were waist high. Now they are as tall (my son taller) then we are.

Of the different kinds of books we had the privilege to illustrate, there are a handful that made the joy-to-illustrate list. Jingle Dancer is one of them.

As mentioned above, we researched and became familiar with the jingle dance as a family. Not just the day at the powwow, speaking with many of the participants, but also on trips to the National Museum of American Indian.

Aside from having a great time illustrating Jingle Dancer was the later benefit of watching your explosive growth (as an author) and witnessing the abundant energy and resources of your blog and website.

You also very much impacted our daughter when she found out we knew the author of Rain Is Not My Indian Name (HarperCollins, 2001). She loved that book.

A true hope of mine is to one day illustrate another book by Cynthia Leitich Smith.

All the best,
Cornelius (& Ying-Hwa) 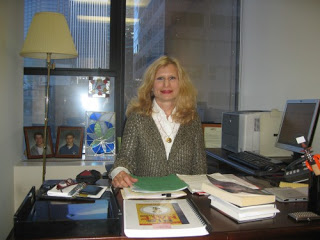 When Cynthia asked me to write something for the tenth anniversary of Jingle Dancer, her first book, I was thrilled. Ten years!

Since it had been a while since I’d read the book, I sat down to reread it. Tears came to my eyes, and I got goosebumps. What an absolutely perfect picture book this still is, after ten years, with such a sympathetic main character and a compelling storyline.

I have always loved the way this book evokes the importance of family, friends, and community—how people together can accomplish something that one person cannot.

Cyn and I started working together in 1997, when she submitted a manuscript called “Something Bigger” to me. There was something in this story about contemporary Native Americans that I just loved, and Cyn had a fresh, exciting new voice.

Then she sent me a picture book manuscript called “Jenna, Jingle Dancer,” which was eventually titled just “Jingle Dancer.”

I fell in love with the story right away—-again, Cyn’s voice and lyrical language were wonderful, and I very much welcomed a story about a contemporary Native girl, with not a stereotype in sight.

I acquired Jingle Dancer at Lodestar Books, which was a imprint of Dutton Children’s Books. I received a revision of the manuscript on April 9, and Cyn’s wonderful agent, Ginger Knowlton, had an offer in hand by the end of April. I had to have this book!

Then, in August 1997, the Lodestar imprint was shut down. Cyn kindly followed me to Morrow Junior Books, where I published the book. (Her next two books were published by HarperCollins, which bought Morrow. Same editor, three publishing houses!)

Editorially, the manuscript was in fine shape when it came in. I said in my letter to Cyn, “The changes I made in the manuscript are to smooth out the writing, and they are minor. I think the story is in great shape. You write well, and every word counts—which is just as a picture book should be.”

Most of the work was on the author’s note and glossary, which we both felt were so important to have in this book. Cyn thought of including a recipe for fry bread but worried (okay, she’s a former lawyer!) that frying the bread is a messy business, and a child could get burned.

As soon as I signed up the manuscript, I contacted Cornelius Van Wright and Ying-Hwa Hu. I’d worked with them before, and I thought they would be the perfect illustrators for this book, with their soft watercolors and ability to draw appealing, realistic characters.

Cyn was quite involved with the art, as we wanted to get it just right. She generously sent me packages to pass along to the artists: a video of jingle-dancing, a craft magazine that featured making jingle dresses, photos of houses and neighborhoods from towns within the borders of Muscogee Nation in Oklahoma.

And have you noticed how many characters in the book are wearing glasses? That’s deliberate: Native Americans are almost never depicted wearing glasses in any media. It was time to change that.

When Cyn received the F&G’s (folded and gathered, print sheets) of the book, she said she felt as though she’d made a trip to family in Oklahoma. I was so pleased!

I’m proud to have published this very, very special book, and the fact that it was Cynthia’s first means a great deal to me. 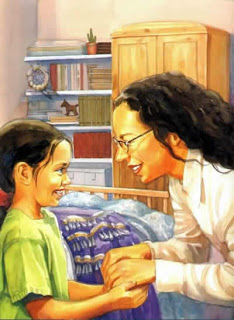 NCSS Notable Children’s Trade Book in the Field of Social Studies and a Selector’s Choice for 2001;

Named to the 2001 2 x 2 Reading List of twenty books recommended for children ages two through second grade by the Texas Library Association;

One of five finalists for the children’s/YA division of the Oklahoma Book Award;

Runner-up for the Storyteller Award from the Western Writers Association;

Enter to win a copy of Jingle Dancer! To enter the giveaway, email me (scroll and click envelope) with your name and snail/street mail address and type “Jingle Dancer” in the subject line. Facebook, JacketFlap, MySpace, and Twitter readers are welcome to comment, RT, or privately message me with the title in the header; I’ll write for contact information, if you win. Deadline: midnight CST April 11. Note: U.S. entries only; sponsored by HarperCollins.