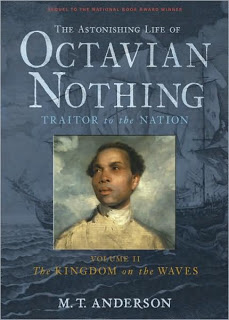 I always took it for granted that people should try as many different forms and genres as possible. After I write one kind of thing, I have a natural inclination to write something that feels as different as possible, to stretch myself in another way.

After the complexity and exactitude of writing in a historical 18th century voice, I’m desperate to write something light and swift and zesty–so I wrote my Whales on Stilts books (Harcourt, 2005-) when resting from my Octavian Nothing books (Candlewick, 2006, 2008).

After writing Feed (Candlewick, 2004), an angry, futuristic satire, it seemed very natural to write an old-fashioned picture book about a wonder of the natural (?) world, The Serpent Came to Gloucester (Candlewick, 2005). 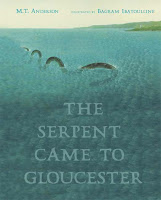 It’s like when you’re writing with a graphite pencil. After a while, the tip gets worn on one side, so the line is flat and broad and sloppy. Then you turn the pencil a bit, exercise a different part of the point, and the line is thin and tense again.

Not only do I like the rotation, I actively need it to keep myself sharp.

Interesting question. I don’t think that I’m naturally a very good picture book writer, but oddly, it’s writing nonfiction picture books that taught me the most about writing novels, rather than the other way ’round.

You really realize, when writing non-fiction books for kids under 9, the importance of concrete anecdotal scenes to demonstrate abstract points. You learn how to take a scene and milk it for its underlying meaning. The more direct and physical it is, the more powerful it will be, if you can get it to embody your overarching point about the subject. 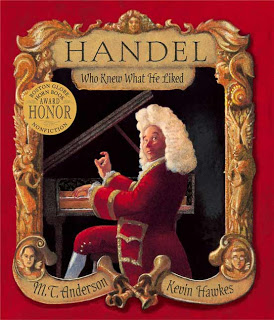 For example, a picture book about the composer Handel [Handel, Who Knew What He Liked, illustrated by Kevin Hawkes (Candlewick, 2004)] is not, on the face of it, a natural topic–okay, you wouldn’t think that there’s a lot of call among the age 6-9 set for a professional psychodrama about an 18th century German contrapuntalist’s switch from opera to oratorio.

But GFH’s life suggested itself as a topic, not just because there are many parents (and, at a slightly older age, kids) who sing Handel’s music every year and love it, but more importantly, because there were so many amazing illustrative images in the stories of Handel that I read: the contemporary cartoon of Handel as a pig in a wig; the boy Handel running behind his father’s carriage; his saber duel with a friend in the snow; the score of “Messiah” blotted with his tears.

By “illustrative,” I don’t just mean that these images suggested illustrations–though that was a major concern too, obviously. (Bach’s life, on the other hand, offers less scope for dynamic pictures. He just wrote contracts and played the organ and wrote more contracts and yelled at his fifty million harpsichord-plonking kids.)

I actually mean that these images in Handel’s life could be easily apprehended, powerful indicators of underlying themes and emotions. There’s a schoolyard bully-like quality to the cartoon of the pig in the wig. Kids understand what it’s like to be made fun of by people who used to be your friends, and what could be a more painful image than that one?

Sure, Handel’s decision to ease off writing operas and focus on oratorios is an incredibly abstract professional call–but when you hear the old tale that, feeling defeated, he (putatively) wrote his most famous work, “Messiah,” weeping, refusing or ignoring the food that was brought to him, that scene immediately suggests the depth of the crisis through its physical particularity.

These scenes can be deployed to exemplify the central points I wanted to get across: Handel’s fortitude (that he forged forward “doing what he liked”) … and also his recognition finally that he needed to change… and how, through altering his course, he discovered that he still could do what he liked–a new thing–and that he could be celebrated for that.

Okay, sorry, that was a longer description than I intended, but you get what I mean. That’s a hard-learned lesson that I have tried to transfer to novel-writing, too: to embody the struggles, the abstractions, the psychological tensions, in very direct, tactile, physical scenes.

It taught me that, though struggles in a book can begin deep within a character, it’s most lively if they extend directly, through cause-and-effect relationships, outside the character.

The outward is thus an expression of the inward, the inward of the outward. The action embodies the themes, and the themes express the action. There is unity between them all.

That’s what I’ve been trying to learn from my forays into writing nonfiction picture books. 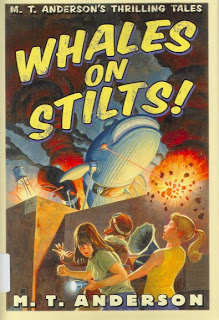 I would get incredibly impatient after a couple of books. Maybe I have authorial ADD. I just wouldn’t find it satisfying. I wouldn’t feel that I was growing.

Certainly, I really don’t like the idea of an agent applying pressure to their clients to stick to the same thing (which I hear happens occasionally). The agent should be there to serve you and your inspiration, not to shoehorn you.

While in my case it hasn’t specifically helped my career, it certainly hasn’t hurt it.

And no, I don’t think it’s done much damage to, say, Kate DiCamillo‘s career, or E. Lockhart‘s (though she publishes under different names), or Kevin Henkes‘ career, or Adam Rex‘s, or Kathi Appelt‘s, or Alison McGhee‘s. (To name a few off the top of my head.)

For some of these writers, I actually feel that it helps in that kids start to love them as early readers and stick with them as they grow into their teenage years. That’s a beautiful thing.

Generally, I advocate mixing it up. As my editor (Liz Bicknell of Candlewick) says, “A change is as good as a rest!”

In the video below from Simon & Schuster, “M.T. Anderson talks about a talent he would like to have, his biggest pet peeve, and more.”