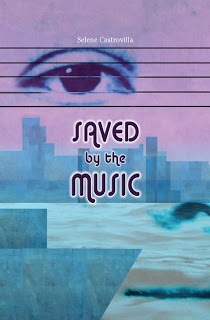 Selene Castrovilla is the debut YA author of Saved By the Music (WestSide, 2009)(read her LJ). From the promotional copy:

The last place fifteen-year-old Willow wants to spend her summer is on a run-down former coffee barge in a boatyard in Rockaway in New York City. But that’s where her force-of-nature Aunt Agatha, a talented violinist, is converting the broken down “steel atrocity” into a floating chamber music concert hall, and Willow has no choice but to help. Her moody, unstable mother has kicked her out for the summer to make room for her latest boyfriend.

Willow feels lonely, depressed, and hopeless, especially when she sees the uncomfortable living conditions on the barge–there isn’t even a shower!

As if that’s not bad enough, Willow also has to deal with Craig, the verbally challenged, dangerously leering hunk of a construction worker who’s helping with the conversion. The one bright spot is Axel, an older teenage boy who lives alone on a neighboring sailboat.

As she gets to know him, Willow is surprised to find that he’s the one playing the cello that she hears late at night on the barge deck. Introverted and mysterious, Axel has the soul of a poet, a penchant for Shakespeare, and a deep, philosophical mind. But he also carries the scars of a disturbing past and the searing pain that goes with it.

The two bond through their shared pain and loneliness, and make each other laugh. But when devastating traumas threaten to destroy each of them, Willow and Axel struggle to save each other—and themselves— before it’s too late.

Actually, it’s more like my characters have climbed up behind me on the diving board and shoved.

At first I clung to the board, dangling, doing anything to avoid that freefall into words.
It took years to let go and splash.

Willow, who would become the voice of my novel Saved By the Music, literally launched into a soliloquy in my mind while I was driving home one night. Her first words were, “Sometimes I feel translucent.”

I didn’t know what to make of this strange internal voice, but I did know that what she was saying was important. I pulled over, yanked out my notebook and took her dictation.

She complained about her name. “How could anyone named Willow be substantial? I bend, I fold with the weight of the rain bearing down on me. What kind of a whooshy, wishy-washy, spill-your-guts-and-weep kind of a name is ‘Willow,’ anyway?”

I didn’t like the name either, but I didn’t say so. She wasn’t looking for a conversation–she was just venting.

She didn’t like her mom either: “I bet my mom did that to me on purpose. She wanted to saddle me with a wimp name so she could bask in the sunlight. Isadora, that’s her name. Why would an Isadora make a Willow? To stomp all over her, that’s why.”

She went on for some time. I wrote it all down dutifully, and when she finished–as abruptly as she’d started–I continued down the block and around the corner to my house, went inside and typed it all into my computer. I knew I had something, but no idea what.

Willow would remain in that file for quite some time.

Meanwhile, I’d written a picture book manuscript about my aunt’s floating concert hall and how I’d helped build it from a coffee barge. I cannot possibly convey the thought and sweat I put into trying to make that sucker work. Many people, editors included, told me they thought it was a novel.

No way. I couldn’t write a novel. Not me.

A couple of years and about thirty barge revisions later, I had to write my MFA thesis. Well, might as well start that novel everyone insisted the barge picture book was, since I had to produce something.

My advisor told me I had to change the name of my character, which had been Selene in the nonfiction picture book.

Then I remembered her.

I remembered that girl who’d ranted in my brain over two years back. I remembered her words, safely stowed in my computer.

“Willow,” I told my teacher. “Her name is Willow.”

But still I teetered at the edge of the diving board, hesitant and afraid. I bought a huge notebook and made tabs: plot, setting, characters, timeline, weather–yes, I made a tab for the weather in my manuscript, and even more nit-picky tabs that I can’t recall.

Now this may work well for some very meticulous writers, and I applaud you if it does–but as I’m not an organizer in my life, trying to force myself to be one in my writing was akin to banging my head against the proverbial wall.

So there I was with my big fat binder and nothing written down except vague notes about plot and some deep thoughts on the weather (it would be hot, definitely, I decided–not a tough call, since the novel takes place in the summer.) I was stalling.

This went on for some time, until I had a dream.

I dreamed a whole other novel.

“Jesse’s dying,” I thought, as soon as I’d opened my eyes.

Then I wondered, “Who’s Jesse? I’m writing about Willow and Axel!”

But this other novel had made its entrance, and it would not be ignored. I started to type it, and an even stranger thing happened. I was able to start the barge novel without any difficulty at all.

I just plunged right in.

It was like my subconscious put the second novel in my mind to prove to me that I wasn’t a planner, and that I needed to just get on with it. The message was clear: Get in there and swim, girl!

Once I took that plunge, it was like I’d grown gills and fins. I swam very happily through those first two novels, finishing them both that semester. And three more since–not to mention the four manuscripts on the American Revolution I’ve done.

Now, writing about the American Revolution does involve lots of planning. That’s a whole other story. But for me, the only way to write a novel is to sit down and write it.

I’ve come to believe that one should write as one lives. This is my best advice for beginning writers struggling with plot. If you’re great at organizing your life–or even your closets–then maybe you’re a good candidate for plotting. Go to it, but don’t let it stop you from the crucial step: doing the writing.

If you’re more of “wing-it” type like me, why not plunge in and write something? A scene, a paragraph, a sentence. It doesn’t have to be the beginning, it doesn’t have to even be good. (For more on this, read Anne Lamott‘s Bird By Bird: Some Instructions on Writing and Life (Anchor, 1995), my bible on the craft of writing.) It just has to be authentic.

I can’t tell you how to write the truth, but you’ll know when you’re doing it.

You’ll know when your writing is right–when you’ve found your “voice,” as they say–and the plot will follow.

How will you know? You’ll feel a great relief, a huge contentment that you’ve put to paper exactly what it was that you meant (or were meant) to say.

Trust that plot will come, because plot springs from characters. They make all the moves, and they do all this based on who they are.

Listen for your characters, but if you can’t actually hear them–that’s okay. If you open your heart to them, they’ll get their message to you about what they want to say.

This has been my experience.

Remember, I resisted all this, and all that did was waste time.

Don’t let this be you.

As someone with a MFA in Writing for Children, how did your education help you advance in your craft? What advice do you have for other MFA students/graduates in making the transition between school and publishing as a business?

The greatest thing about participating in New School University’s MFA writing program was being in abundant creative company. Writing can be so lonely!

I was older than most of the other students–it had been ten years since I graduated from NYU with a degree in English. While I thought I’d have a hard time acclimating, this turned out to be a very good thing.

I’d been balking at the idea of writing a novel for quite some time. Who was I to write such a thing? Didn’t the gods have to come down and grant you permission?

But there my classmates sat–all these young writers brimming with determination, endlessly producing pages of their manuscripts, not facing any sort of confidence problems at all.

The writing program also gave me the urgency I needed to get started. I had to write a thesis, so might as well take a shot at that novel I kept avoiding.

I picked up a lot of technical pointers from my teachers. Things like tips on running more seamless dialogue and the background things characters do while they’re talking. These seem trivial, but they’re no more minor than learning carburetor adjusting would be at auto mechanics’ school.

I also perfected the art of going through a book I loved to figure out what the author did to make me love it. This is an invaluable tool for learning the craft. To me, sensory details always made the difference, so I made sure my work was flooded with them.

I was lucky enough to have Jackie Woodson for a teacher, which was great because I got to talk to her about her writing process. There is something so thrilling about discussing a writer’s work with them, and how they achieved it. I found out the words don’t just pour out perfectly–that she too revises. What a relief!

The writing program helped me use my passion more effectively and gave me the confidence I sorely needed. Yes, I could have a career in writing!

I would advise other MFA students/graduates to take it easy on yourselves, and to be your own biggest supporters. There’s going to be a lot of rejection. Some of it warranted, some of it for absolutely no good reason.

I received one letter that stated: “Your writing is beautiful and flowing. It possesses energy and soul, which is why I’m sorry to say that we won’t be publishing it.”

You have to laugh and move on or these things will torment you and make you drink like Hemingway. Strive for Hemingway’s success and level of craft, but not his liver.

Believe in yourself and success will follow. If you know you’ve written something fine, keep sending it out and keep writing. There’s a certain luck factor you can’t control, so don’t try.

But then, as Shakespeare wrote: “Things won are done; joy’s soul lies in the doing.” My greatest achievement has not been getting published–it has been getting the writing done.

Oscar Wilde wrote: “If one tells the truth, one is sure, sooner or later, to be found out.” Tell the truth, and they’ll find you out, eventually.