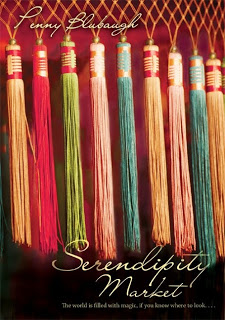 Penny Blubaugh is the first-time author of Serendipity Market (HarperTeen, 2009). From the promotional copy:

When Toby breathes on Mama Inez’s bird-shaped invitations, giving them the power to fly, plans for the Serendipity Market begin. Soon, eleven honored guests travel from afar and make their way to the storytellers’ tent to share their stories.

Each tale proves what Mama Inez knows—that magic is everywhere. Sometimes it shows itself subtly—a ray of sun glinting on a gold coin, or a girl picking a rose without getting pricked by the thorn—and sometimes it makes itself known with trumpets and fireworks.

But when real magic is combined with the magic of storytelling, it can change the world.

This is a breathtaking debut novel written with elegance and grace.

What were you like as a young reader, and how did that influence the book that you’re debuting?

The first book I remember loving was a big green book filled with fairy tales and fantasy poems. I don’t remember the title, just the large format and the endpapers with princesses and fairy creatures with tiny wings, all cavorting in a glade of primal trees filled with rich spring flowers. I could pour over those endpapers for hours.

After that, Peter and Wendy by J. M. Barrie (Peter and Wendy; Margaret Ogilvy by J. M. Barrie, illustrated by F. D. Bedford (Scribner, 1913)). This one was a treasure, published in 1913 with black and white illustrations by F. D. Bedford. Each illustration was protected by an onionskin flyleaf, and even as a kid, I recognized the beauty in this old brown book with the gilt edges.

Set during World War II, these are the stories of Barnaby, his “little friend Jane,” his talking dog Gogon, Gus the Ghost, and Mr. O’Malley, Barnaby’s fairy godfather. Mr. O’Malley wears a homburg, smokes cigars, gambles, drinks and sports pink wings. Absolutely perfect! And completely on par with Winnie the Pooh by A. A. Milne, with decorations by Ernest H. Shepard (E. P. Dutton, 1950) for showing the fantastic as completely normal.

Mystery, light romance, lost worlds, science fiction with dashes of dystopia and fantasy as part of the everyday world.

It’s not much of a surprise, then, that Serendipity Market is a reality-based fantasy drawing on old fairy tales and fantasy poems. In fact, it seems like it was inevitable!

I love fantasy because it can say so much about what’s happening in the world and, at the same time, can do it on a slant. The best fantasy doesn’t need to trumpet its intentions (Look! Isn’t it amazing the way the wizard comes out of his bottle in dire times?!).

Instead, it makes the reader feel that, if they turn that corner at just the right time, in just the right way, they’ll find that fantasy world, too. It won’t be a world of safety, flowers, and unicorns. But it will be a world where anything can happen, where they have to keep their wits about them, where there’s danger but they’ve never felt more alive.

And if the world is built on a template of our normal everyday world, hopefully that’s exactly what will happen. Fantastic normalcy.

In Serendipity Market, I tried to make all the fantastic seem as normal and everyday as possible. Scrying pieces of metal for their internal forms? Watching stream ripples and knowing there’s a story in Texas? Breathing life into origami birds? Mere everyday happenings. No fanfare.

Nothing unusual. All as normal as brushing teeth. Or, reality-based fantasy.

Because who didn’t believe, at least for a little while, that Peter and Tink were going to come and take them to Neverland, too? Who didn’t memorize the directions (second to the right and straight on till morning) just in case they needed them someday? Who didn’t believe that Pooh could talk to Christopher Robin? Or that Nancy Drew would beat all the adults, including the police, to the criminal?

Just like all of my favorites, Serendipity Marked is fantasy based on the real world. Everything that happens, no matter how amazing, should seem like it could happen, should seem like it’s right around the corner. Holding its breath, waiting just for you.

How did your MFA help you advance your craft?

Getting my MFA from Vermont College was the thing that pulled me from the it-might-be-nice-to-write phase of my life into the oh-look-I appear-to-be-a-writer phase. It was also one of the highly good things I’ve done with my life.

Before my coursework at Vermont, I’d spent years in sporadic attempts at writing. Trixie Belden knockoffs at age 12, journal attempts in college, some professional articles about young adults and libraries which got me published but didn’t zoom me on to fame and glory. Then I saw an ad for the brand new MFA program in Writing for Children at Vermont and I applied. To my happy surprise I was accepted–and, wow! What an amazing experience.

During my time at Vermont, I learned what it meant to commit to the writing and to believe that something decent can evolve out of a morass of nothing. I learned to persevere, to believe in myself, and to trust that I have both a vision and a voice that truly are mine and mine alone.

These aren’t things that I’m always aware of. My self-doubt is huge. And the voice thing? I’m just finally starting to understand what that means, to know what my own voice sounds like. (I think it was about a month ago when I realized that I’m a dialogue-heavy writer!)

The self-knowledge, along with the craft, seems to evolve bit by bit, piece by piece. And the only way to keep that evolution going is to write.

By writing, I don’t mean only the physical act of putting pen to paper, which is the luddite way that I start everything–for those who care, it’s a Rotring Art Pen and a Clairefontaine grid notebook. I also mean thinking about the work, thinking about writing in general, reading a variety of things–I love poetry and adult nonfiction in addition to kidlit–and analyzing what I’m reading. 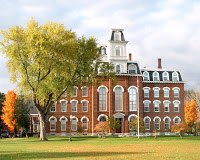 The MFA gave me the skills to do this analysis, to read with a fine eye, to know when fine-eye reading is important, and to be able to put pen to paper even when the whole idea of facing that blank page is scary. The finer points of many of these skills didn’t float to the surface for years, but when I needed them, there they were, just waiting for me to call upon them.

It’s amazing what can be remembered. Ten years later, I can suddenly hear someone saying, “You can’t ‘say’ with a roll of the eye.” Or “There is absolutely nothing wrong with the word ‘said’ after a character has spoken.” It’s like carrying a little recording around in your head that snaps on and off when you need specific instructions or information

For people who want to write, the first thing I’d say is, writing is hard! It’s work. And it’s worth every bit of that work when your find the right phrase, the perfect word, the beautifully executed scene.

Then I’d add the old butt-in-chair advice that everyone seems to give. Remember, it’s not a cliché if it’s true. So sit down and write.

It’s so hard to silence that inner critic that tells you how terrible you are, that says you should just give up and not even try. But the more you ignore that niggling little voice and keep working, the better you get. Honestly! It can’t work any other way. You will improve.

And publishing? Again, old advice. If you’re good, if you can write with style and grace, if you’ve learned your craft, someone will notice. True?

Probably more truth than untruth here, even when the market is tight and it feels like nothing good will ever happen. Because that’s almost exactly when something amazing may happen. And that idea (you know it’s going to happen at some point!) should keep you going when things get bad. Keep writing, and someone in the world will find you.