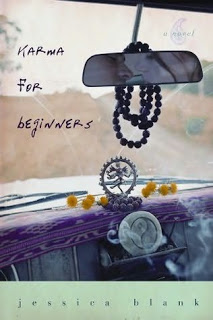 My new YA novel, Karma for Beginners (Hyperion, 2009), came out this August; I was writing that novel at the same time that my husband Erik Jensen and I were adapting my first YA novel, Almost Home (Hyperion, 2007), for feature film.

(Jon Bon Jovi‘s production company optioned Almost Home, and Erik and I were lucky enough to be hired as the screenwriters!)

Erik and I also write plays together (our latest one, “Aftermath,” ran Off-Broadway in N.Y.C. this fall) so we’re used to collaborating. We have a great time at it, and we’re a good team.

I mostly work in film, theater and TV–I’m an actor and occasionally a theater director—and I actually taught myself how to write fiction so that I could have a project that I didn’t have to collaborate with anyone on!

I adore the collaborative process of theater, film and TV–whether I’m acting in it, writing it, or directing it–but I also wanted something that I could just work on by myself at the computer. My first fiction project was the YA novel Almost Home.

One of the biggest differences between writing fiction and writing screenplays is that with fiction, you have the luxury of being able to describe the characters’ thoughts and feelings, to really get inside their heads and hearts and talk about what’s in there.

As a screenwriter, you don’t get to describe anything in a screenplay that wouldn’t be visible to the audience watching the film. You have to show those thoughts and feelings, in visible, externalized actions. The actors fill in the nuance and feeling—what the screenwriter provides is a structure of action, a framework that the actors can hang their performances on. Also, a conventionally structured movie needs a single protagonist–or two, tops–on a linear journey, with one point of view that the viewer can follow. 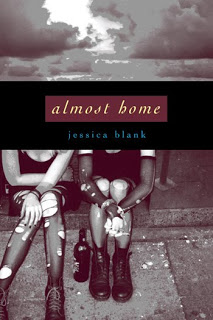 Almost Home (the novel) isn’t structured at all like a movie—it’s a novel-in-stories, about a group of homeless teenagers in L.A., with each chapter told from a different kid’s point of view.

The reader gets to piece together the story through different characters’ points of view about it, and not every kid is a totally reliable narrator–each of them has fears, crushes, addictions, loyalties, etc, that affect how they view the events in the book.

It was a challenge to streamline the events and characters in Almost Home into a more cinematic structure, focusing in tightly on the friendship between the two main girls in the book, while keeping the dynamic of the group of kids, who are kind of a little tribe.

It was a huge help to be adapting it with Erik—first of all, he’s brilliant and a wonderful writer and full of great ideas, and second of all, he didn’t write the novel, so he had a sense of perspective and distance from the material, and a great eye for whether something in the novel was helpful for the movie version or not.

Karma for Beginners (a funny coming-of-age story about 15-year-old Tessa, her hippie single mom, and the older guy Tessa falls in love with, set on a meditation ashram in 1987) has a single protagonist, a story that progresses in a linear way, etc.

There’s more external action in Karma for Beginners–it’s less reliant on internal character monologue—which is really important for movies, and Tessa’s journey follows a pretty cinematic structure. There’s also lots of dialogue (which is what screenplays are made of!)

Karma for Beginners hasn’t been optioned for film yet, but I would love to adapt it (with Erik as well)–I think it would make a terrific, quirky, indie-type movie along the lines of “Adventureland” (2009), “Juno” (2007), and “The Squid and the Whale” (2005). I can already see it in my head!