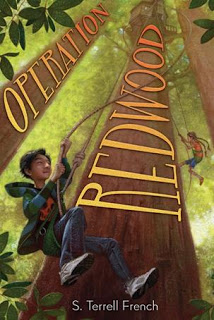 S. Terrell French is the first-time author of Operation Redwood (Amulet, 2009). From the promotional copy:

Waking up alone in an abandoned office, Julian Carter-Li intercepts an angry e-mail message meant for his high-powered uncle:

Sibley Carter is a moron and a world-class jerk!!!

With that, Operation Redwood is set in motion as Julian discovers his Uncle Sibley’s plan to log an ancient redwood grove in Northern California.

Will there be “consequences” when Sibley discovers Julian’s been tampering with his e-mail? Can Julian find out more about Robin, the intriguing girl who sent the message? Can he escape math camp for the summer and help save Big Tree Grove? Is Operation Redwood doomed to failure…or is there hope?

Like many writers, I was a voracious reader from an early age.

While Operation Redwood is a contemporary book, with e-mails and cell phones, there is an innocence to the children–and a kind of good-natured camaraderie–that I associate with my childhood reading.

Also, many of these books have a rather romantic view of the wholesomeness of nature, which I seem to have incorporated into my own worldview and into Operation Redwood.

Three other books I also loved as a child were From the Mixed-Up Files of Mrs. Basil E. Frankweiler by E.L. Konigsburg (Atheneum, 1968), My Side of the Mountain by Jean Craighead George (Dutton, 1961), and Island of the Blue Dolphins by Scott O’Dell (Houghton Mifflin, 1960).

All of these involve children having to make their way in the wilds–of New York City or more remote places. Like these children, Julian, the protagonist of Operation Redwood, is independent and resourceful and is forced to navigate a complicated world with little or no adult help.

I wrote Operation Redwood in the afternoon while my youngest child (then three) was napping, or late at night when all three of my children were asleep.

The downside of writing with young children is that they are so demanding of your time and energy.

There are a number of perks as well, though. Having children gives you an awful lot of opportunities to study how kids talk and interact at close quarters. The relationship between the main character in Operation Redwood–a 12-year-old San Francisco boy–and his best friend, for example, was very much influenced by my son and his friends: their loyalty, energy, humor, and constant jostling for position. So take notes (at least mentally).

Another perk is that you have a built-in audience for your first draft! Writing typically has more flexible hours than most jobs. You can work from home and most deadlines are fairly extended, so that’s helpful for parents.

Once children are in preschool or elementary school, you have a little more time, though I sometimes find I miss the focus that was required to complete Operation Redwood during such compressed time periods.