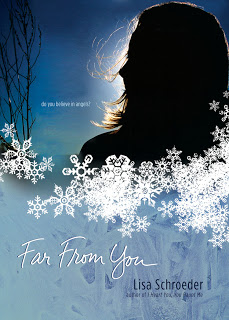 We last spoke in May 2008, after the release of I Heart You, You Haunt Me (Simon Pulse). Could you briefly remind us what it’s about? Do you have any updates for us on this title?

I Heart You, You Haunt Me is the story of a girl, Ava, whose boyfriend dies and he loves her so much, he doesn’t want to leave her and comes back as a ghost. It’s a story of love and loss, healing and hope.

It was voted a 2009 ALA Quick Pick for Reluctant Readers. It’s also a 2010 New Hampshire Flume Reader’s Choice Nominee and a 2009-2010 South Dakota Library Association YA Reading Program Selection!

Congratulations on the publication of Far From You (Simon Pulse, 2009)! What is the book about?

Far From You tells the story of sixteen-year-old Alice, who lost her mother to cancer years ago, and time hasn’t quite healed the wound. She copes the best she can by writing her music, losing herself in the love of her boyfriend, and distancing herself from her father and his new wife.

But when a deadly snowstorm traps Alice with her stepmother and newborn half sister, she’ll have to face issues she’s been avoiding for too long.

Each of my books generally starts with a few seeds of ideas, and this one was no different.

First, I had been thinking about that wonderful, award-winning novel, Out of the Dust by Karen Hesse (Scholastic, 1997) and how, as you read, you can almost taste the dust and feel the heat radiating off the page.

I then had the idea of going in the opposite direction with the temperature, and writing about people stuck in a blizzard.

In Oregon, where I live, we had recently followed the tragic story of the Kim family in the news, so it seemed timely as well.

It was hard. And exciting. And scary. My first novel had been so easy to write, and this one wasn’t anything like that, so I worried that meant something. But I don’t think it really does. The process for each book is going to be different, and that’s okay.

With the second book, I was keenly aware that if I could finish it and make it something my editor might like, people would be reading it and judging the writing. It’s a much more difficult place to write from, with that noise going on in your head.

I found music helped immensely. I’ve never been one to write to music really, but that changed with this book. I’d write for hours with ear buds in my ears, listening to music that helped me get inside Alice’s head.

I think when we struggle, we need to look around and try different things. Try new ways of plotting, try new and different places to write, or different times of days. What has worked before may not work this time around.

I will admit it’s challenging at times, especially because I have a day job too. For me, unfortunately, promotion probably doesn’t get as much time as it should. I’ve always believed that the best thing you can do as an author is to keep writing books. So, first and foremost, that’s been my priority. By spring of next year, I’ll have four novels out in three years, and I’m proud of that.

The rest of it, I do what I can and try not to stress about it. The thing about promotion is that there’s always more a person can do, and it’s so easy to feel badly that you aren’t doing enough. Most of the promotional stuff that I do is online, because I can do that early in the morning or on the weekends when I’m not working.

When I’m working on a new book, I try to write at least thirty minutes a day. I also spend time most days doing blog posts, answering interview questions, responding to reader e-mails, etc. I find it’s best for me to spend time on both each day, even if it’s just a little time each day.

Figure out what you like to do and do that. Think about what your strengths are in regular life and figure out how to use that in your promotional stuff.

Maybe you think like a teacher because you are a teacher or have been a teacher. How can you promote your books for teachers and get into schools? You’re going to know that better than someone like myself who has never been a teacher. So play to your strengths, and don’t feel badly that you can’t do everything.

A big chunk of my time is spent working in Human Resources at a large teaching hospital.

For fun, I love to walk my dog, play games with my kids, read books (of course!) watch favorite TV shows like “Project Runway” and “Friday Night Lights,” read blogs, and bake delicious treats for my family.

In January, Chasing Brooklyn (Simon Pulse), another ghost story told in verse, will be released. This one is told from the POV of two characters, Brooklyn and Nico, who are both being haunted by two different ghosts. I’m hoping fans of I Heart You, You Haunt Me will like this one.

In March, my first mid-grade novel will be released. Called It’s Raining Cupcakes (Aladdin), the book is about a girl who dreams of traveling the world but is stuck in a small town in Oregon trying to help her mother get a cupcake shop off the ground.

“A Revision Medley” by Lisa Schroeder