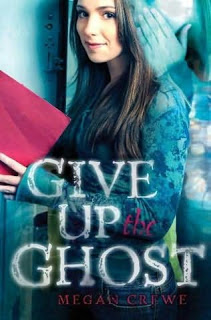 Megan Crewe is the first-time author of Give Up the Ghost (Henry Holt, 2009)(see Megan’s blog). From the promotional copy:

Cass McKenna much prefers the company of ghosts over “breathers.” Ghosts are uncomplicated and dependable, and they know the dirt on everybody… and Cass loves dirt. She’s on a mission to expose the dirty secrets of the poseurs in her school.

But when the vice president of the student council discovers her secret, Cass’s whole scheme hangs in the balance. Tim wants her to help him contact his recently deceased mother, and Cass reluctantly agrees.

As Cass becomes increasingly entwined in Tim’s life, she’s surprised to realize he’s not so bad–and he needs help more desperately than anyone else suspects. Maybe it’s time to give the living another chance…

Could you tell us about your writing community–your critique group or  partner or other sources of emotional and/or professional support?

I consider myself lucky to have had many fabulous sources of support throughout my writing career so far. Most of them have been online, and I think that’s one of the best things about the Internet–the way it allows us to connect with so many like-minded people we might never have gotten to know otherwise.

When I was first starting out with short stories, I got most of my critiques at the Online Writing Workshop for Science Fiction, Fantasy and Horror. It’s full of amazing critiquers who helped me identify the strengths and weaknesses in my stories. Ultimately I found it didn’t work quite as well for me when it came to novels, but I ended up meeting a couple of critique partners through the workshop I continue to exchange manuscripts with to this day.

In the last several years, I’ve gotten most of my feedback from one-on-one critiquers, met through workshops and writing communities. They’ve been invaluable. There’s nothing like getting a reader’s eye view of an entire novel, and my books have gotten much stronger for it. And a few of my critique partners have also been close friends, people I can turn to and who can turn to me when we need reassurance or guidance.

As well, I have an in-person writers group that I meet with once every two weeks. It’s wonderful being able to hash out everything from the details in one scene to the plot line of an entire book face-to-face. And we also do a yearly writing retreat with all of the same plus lots of writing, swimming, canoeing, and roasting marshmallows!

Since selling my first novel, I’ve also had the pleasure of joining a couple of amazing groups of writers: the 2009 Debutantes and the Class of 2K9. I don’t know how I could have made it through the last year and a half without them! We share tips on everything from writing and revising to submitting and promoting, and if anyone’s ever feeling down or stuck, we’re always there for each other to cheer on or find a solution.

Really, I’ve only had good experiences when it comes to the children’s and YA writing community. I think we all recognize that it can be a long and difficult journey, and we’re happy to help each other along the way.

As a paranormal writer, what first attracted you to that literary  tradition? Have you been a long-time paranormal reader? Did a particular  book or books inspire you?

I’ve always enjoyed reading stories that go at least a little beyond the boundaries of “reality as we know it.” There’s so much room for surprises, for the unexpected. And there’s something thrilling about seeing a character faced with a problem they never thought could exist. What do people do when faced with the (supposedly) impossible?

Naturally, I enjoy writing those sort of stories, too. Making my characters face the unexpected. Pondering the many “what ifs” that open up when you allow for the existence of things like ghosts. It’s those sorts of “what ifs” that get me excited about a story. I love realistic fiction as well as speculative as a reader, but when it comes to writing, the ideas that grab me and won’t let me go always have a paranormal or fantastical element.

Two of my favorite authors growing up were Roald Dahl and Zilpha Keatley Snyder.

Dahl’s books are almost always fantastic, but what’s so wonderful about them is that he rarely lingers on the “wow, that’s so fantastic” part of the story. He gets straight to the consequences and how the characters deal with them. Okay, there are witches, there are giants, we know this now, let’s get on with the story.

Give Up the Ghost begins four years after Cass saw her first ghost; it’s about someone for whom the supernatural has become almost natural and what that means for her.

Zilpha Keatley Snyder writes some fantasy (like the Green-Sky trilogy (Atheneum, 1975-1977), but most of her books are realistic with just a touch of something magical–often something that’s only imagination.

I say “only,” but that’s inaccurate, because Snyder presents imagination as a very powerful force. It’s the intricate worlds that Martha and Ivy make up that gradually help Martha come into her own as a young woman in The Changeling, my favorite of Snyder’s books, for example.

Reading those stories, I think, inspired me to try to have a balance of the realistic with the paranormal in my books. To show that everyday concerns like bullying and sibling rivalries are just as affecting as something supernatural.

Give Up the Ghost may be a paranormal novel, but the most important element is how Cass ends up dealing with the real life troubles she’s experienced.

Maybe this is a funny thing for a paranormal author to admit, but really, what I like most about writing the fantastical is finding the realism inside it.

[Watch this book trailer for Give Up the Ghost by Megan Crewe.]