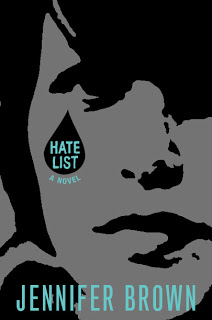 Jennifer Brown is the first-time author of Hate List (Little, Brown, Sept. 2009). From the promotional copy:

Five months ago, Valerie Leftman’s boyfriend, Nick, opened fire on their school cafeteria. Shot trying to stop him, Valerie inadvertently saves the life of a classmate, but is implicated in the shootings because of the list she helped create. A list of people and things they hated. The list her boyfriend used to pick his targets.

Now, after a summer of seclusion, Val is forced to confront her guilt as she returns to school to complete her senior year. Haunted by the memory of the boyfriend she still loves and navigating rocky relationships with her family, former friends and the girl whose life she saved, Val must come to grips with the tragedy that took place and her role in it, in order to make amends and move on with her life.

The short answer, of course, is everywhere and all the time, because I think I do most of my writing work in my head, before I ever sit down and put my fingers on the keyboard. I’ve heard a lot of writers say they spend most of their time studying the ceilings above their desks, staring blankly while trying to “conjure up” a scene or story idea, but that’s not really my style. I would be much more likely to be distracted by the cobwebs up there.

Instead, I find my inspiration while doing mundane tasks, such as laundry or cleaning the bathrooms, making the beds. I get my real writing done then, so when I get to my desk, it’s more a matter of dictation than creation.

I never had an actual “office” before I sold Hate List. My computer was on the kitchen table, where I could watch my kids and write at the same time. For almost a decade, one end of the kitchen table was “off-limits,” and my work was condensed to a single chair. I had to learn to be super-organized, to keep my files and books in a space apart from where I’d be working, and to tune out peripheral noises.

After Hate List sold, I finally felt it was time to get an office, and converted one end of our finished basement into my writing space. It felt big and frightening, honestly, and I spent a lot of time making the space very me, so I could feel comfortable in it.

I bought an old desk that I found tucked up in a corner of the top floor of a flea market/antique mall. It’s large and sturdy and slightly beat-up…sort of like the furniture equivalent of me! I immediately began taping cartoons and photos that I’ve collected over the years all over it, and also slapped a John Lennon bumper sticker across one corner and sprinkled the middle of it with tons of colorful craft jewels. A few other “props”–a giant 3-ft. pencil, a collection of Dr. Seuss Christmas ornaments, a mylar balloon that reads, “Try to act mature,” and a metal folding chair still bearing its $4.00 estate sale price tag–and I was set. 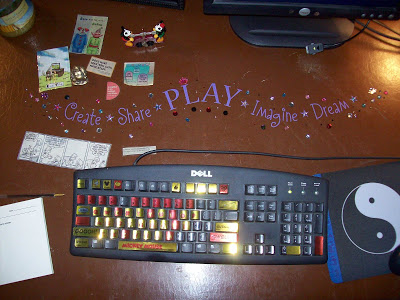 When I actually sit down to write depends on what I’m working on and what else is going on in my life. I’m a stay-at-home mom of three, so I’m pretty much forced to work my writing schedule around their schedules. This might mean I get one eight-hour day of writing and not much else one week, and three three-hour days of writing the next week.

If I’m really concerned about a deadline, I’ll put on the coffee and either stay up till all hours of the night or wake up before dawn in the mornings.

A few months ago, I finally broke down and bought a laptop, and that turned out to be one of the best things I’ve ever invested in. With the laptop, I can hang wherever the kids are hanging and get tons of online work done, so when I get a chance for peace and quiet, I can just concentrate on writing without worrying that emails are piling up or I haven’t tweeted in a while or my Facebook page is getting out of control.

My connection with Cori Deyoe (3 Seas Literary Agency) was a good lesson for me about following my gut and never giving up on the dream.

I connected with Cori in November 2006. I was a blind “slush pile” submission. We had never met in person; we did not connect at a writer’s conference or through a mutual writing connection. I had simply submitted to 3 Seas blindly, having read up on them and thinking they might be open to representing my women’s fiction novel. (Yep, I said “women’s fiction.”)

Almost a year after I submitted, Cori emailed me, asking to see the first three chapters. I sent them, and right away she asked to see the full manuscript. The day after Thanksgiving, she called me to tell me she wanted to represent me and my novel.

About ten seconds on the phone with Cori and I knew she was the perfect agent for me. I never hesitated in signing. I’d already done my research up front, reading about them online and in Writer’s Market, checking out some of the books they’ve represented, checking them out on P&E.

The fact that Cori was so sweet (and calm, which is a helpful counter-balance to my wired-up personality) and that she was so passionate about the book and showed an interest in helping me build a career (not just sell a book) was just icing.

While Cori worked on selling that novel (which hasn’t sold… yet), I followed a gut instinct and wrote Hate List. Totally out-of-genre for me.

When I finished Hate List, I was afraid to show it to Cori. Afraid she’d hate it and, worse, would be unhappy with me for writing something so very different than the work she took me on for.

But she, thank goodness, loved it and began trying to sell it immediately. Turned out, my gut instinct that Cori was a perfect match for me paid off in the end — she not only sold Hate List, but sold it to a “perfect match” editor (T.S. Ferguson at Little, Brown).

I couldn’t have asked for a more perfect scenario for my first book sale. Cori is always my biggest cheerleader and confidence-booster, yet she doesn’t hesitate to tell me when I’ve written something that just isn’t working (lovingly, of course).

My biggest piece of advice, then, is to just follow your gut and never give up. I had given myself a “100 Rejections” goal, meaning I would not stop submitting that first novel until 100 agents had rejected it. Fortunately, I found Cori before I hit that 100 mark. And I followed my gut in writing Hate List… and it turned out to be the perfect path for me to follow, even though it was different and scary and I felt like I was putting everything on the line.

Do your research, yes. But let your instinct be just as much of an expert when it comes to searching for an agent.