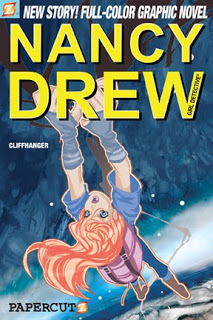 In your own words, could you tell us about Nancy Drew: Girl Detective (Papercutz, 2005-)? And, wait, I’m confused. Is Papercutz somehow connected to Simon & Schuster?

SK: Young mystery buffs have loved the brilliantly curious Nancy Drew since 1930 when she was created by the Stratemeyer Syndicate to fill a need for their growing female readership.

Stefan took part in the updating of this ageless character and wrote the first ever Nancy Drew Graphic novels for Papercutz in 2005. If that wasn’t cool enough, he got his actual name on the cover–the books have been ghost-written for decades by a variety of authors using the name Carolyn Keane.

SP: Papercutz, founded by my pal Jim Salicrup and Terry Nantier, is a completely separate entity, focusing on graphic novels for tweens. Simon & Schuster bought the rights to all the Stratemeyer Syndicate characters in 1984. A few years back, Papercutz licensed the rights to Nancy Drew and The Hardy Boys from S&S. Long walk, but there you have it!

While the prose books continue to be published under the house name Carolyn Keene, the folks who’ve written the movies and the TV series in the seventies were always credited, so it was argued that Sarah and I could use our names on the graphic novels.

Sarah actually started co-writing the graphic novels with me around book five in the series, The Fake Heir, but isn’t credited until the tenth, The Disoriented Express.

What is at the heart of the timeless appeal of Nancy Drew?

SK: Nancy speaks to something in the teenage heart which never changes – the fearless quest to know more.

SP: Ed Stratemeyer and the early writers he worked with (notably Mildred Benson) really hit the nail on the head. She’s the original girl-power figure, popular for decades, enjoyed by new readers daily and fondly recalled by such prominent figures as new Supreme Court Justice Sonia Sotomayor. She’s also the basis for more recent characters like “Buffy the Vampire Slayer” or “Veronica Mars.”

Why was this character a great fit for a graphic-novel series?

SK: Nancy Drew, while living in a small town, gives us the opportunity to engage a real variety of characters and backdrops. Comics are a great venue for bringing the reader closer to those characters, settings, and tense moments in which Nancy faces danger. Her first-person narrative is a perfect fit for a graphic medium.

SP: I was shocked to learn that this was the first comic series for Nancy! She’d been in just about every other media. The graphic novel is a very intimate, inviting media, especially for reluctant readers. It seemed a natural place for such an iconic character.

What are the particular challenges in writing such an established character?

SK: As with any licensed character, there are times when we have to hold back an impulse to change the character. Story arcs can’t become character arcs in quite the same way.

Though she can learn lessons along the way, Nancy has to emerge from every story with her values, beliefs, friends, family, and reputation in tact.

SP: There’ve also been hundreds of Nancy Drew stories, so it’s a fun challenge to try to come up with ideas that haven’t been done before. I’m very proud of what we’ve come up with so far, including vanishing lakes, stolen computer chips, edgy magicians and even an entire town that went missing. Our latest features Nancy hanging from a cliff for the entire story, trying to figure out who pushed her! It’s our nineteenth, called Cliffhanger (get it?) and it’s out in October.

SK: Nancy’s character presents us with a lot of possibilities. Her insatiable curiosity, willingness to try anything, and variety of expertise (she’s a real know it all) opens up a whole world of possible mysteries to solve and ways that she can solve them.

SP: She has the same appeal as any detective character–her obsessive attitude toward mysteries can take you anywhere, really. Add to that that she’s a young, self-possessed girl, and things can really click in cool and exciting ways.

As a young reader, were you a Nancy fan?

SK: No. My sister had the entire collection, and I loved the little blue books with the outline of Nancy with her magnifying glass embossed on the cover, but I never read more than a few. I was an Ed McBain fan — gritty stuff.

SP: Again, nope. My mother had a few on her shelf, so I likewise remember the covers very clearly, and I may have thumbed through one or two, but I was more into Encyclopedia Brown (1963-) by Donald J. Sobol and superhero comics. I like her now, though!

How did you learn to write in a graphic format?

SK: I’ve been writing Mickey Mouse and other Disney character comics for many years. I had-on-the-job training for that.

SP: My grandfather taught me to read by sitting me on his lap and reading comic books to me. I’ve been a huge fan ever since. I attempted my own comics for the first time around age eight or nine. It’s been a lifelong love.

How is it different than writing a prose novel?

SK: Completely. I can describe something simply and the artist takes it to the next level of creativity. Often when I see the final work, it’s like reading something new. It’s very cool to be able to inject an image with very sparse and intimate narrative to create incredibly rich and pivotal “moments” in a story. It’s more like directing a movie.

SP: Yes, it’s very much more of a collaborative process than a novel. You give up some control, but inviting someone else’s sensitivities in makes for a really nice experience.

The big trick writing-wise is to make sure that, in scripting, you really use the pictures to tell the story as much as possible.

What advice do you have for other writers interested in writing graphics?

SP: It’s the same advice for any kind of writing, really. Develop great taste, by reading and studying absolutely everything, and then write what you like. I’d also read Scott McCloud’s Understanding Comics: The Invisible Art (1993) – the seminal book on the subject. 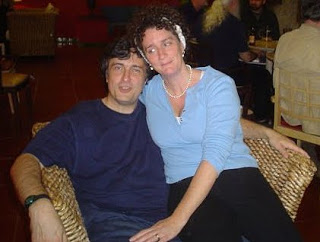 So, what’s it like being writers and married to each other and also devoted to Miss Drew?

SP: Totally cool. As I said it’s already a collaborative process. It’s nice to sit down with Sarah and hash out a plot together.

We’ll break it into three chapters, and usually one of use will write the full script, then we pass it back and forth until it’s done.

SP: While you’re at it, check out the newest issue of Tales from the Crypt, also from Papercutz! It features a satire of Twilight [by Stephenie Meyer (Little, Brown, 2005)] co-written by myself and our daughter Maia. We’re keeping it all in the family!