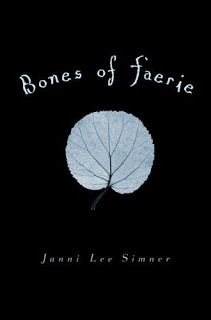 Janni Lee Simner on Janni Lee Simner: “I was born aboard a pirate ship, but as soon as I came of age booked passage with a caravan bound for the Sahara, and spent the next decade as a seeker of lost cities, hidden tombs, and ancient artifacts before settling down in the Sonoran desert to write…

“Well, okay, maybe that’s not how it really happened, but it’s kind of how I wish it had happened.

“I was actually born in New York and might have stayed there, if not for a Girl Scout cross-country camping trip the year I was thirteen. I fell in love with the western United States on that trip, and I also caught my first glimpse of the St. Louis Arch there.

“I returned to St. Louis (where Bones of Faerie is set) for college, started writing for publication after graduation, and soon after moved further west and really did settle down in Arizona’s Sonoran desert.”

I was one of those kids who got so lost in books that I wouldn’t hear people talking to me, or even calling me in for dinner. You know, that kid who walks down the street with a book in hand, while everyone but her worries that any moment someone will hit her… Actually, I’ve occasionally been seen doing that as an adult, too.

Why do you write for kids and young adults today?

I never stopped reading kids’ and YA books, so I’m writing what I most love to read!

I’d been filling notebooks with stories since junior high school, but just out of college I spent the last of my student loan money on a computer (DOS based, 5 1/4″ floppy disks, no hard drive, which gives an idea of how long ago that was!) and decided to see if I could make something of this writing thing.

Early on, I sent for guidelines to an anthology edited by Marion Zimmer Bradley. She pointed out that while writing a novel might be frightening, if you write a page a day, you have a book in a year. After that I made myself write something–even if it was only a few lines–every day.

I submitted my first short story to that anthology, and it sold, and for a little while I thought maybe this writing thing wouldn’t be so hard after all.

It was only after that sale that I got my first rejection slip–and lots more after that–and settled down to the business of really learning how to write.

Early on, did you have the support of a mentor or critique group?

After I sold that first short story–I was still living in St. Louis at the time–I met up with a group of local writers, the Alternate Historians, who invited me to join their critique group.

I remember wondering if I really needed a critique group, which seems hilarious now. I learned so much the two years I was with the Alternate Historians–as much as any MFA program could have taught me.

I’ve learned so much from all of them, too. Hopefully I’ve given as much back in return.

Taken myself and my writing a little less seriously, maybe. I wouldn’t want to lose the focus and dedication and willingness to make time in my life to write–but as important as writing is, it actually isn’t everything, and it’s important to make time for other things, too.

Doing so gives you more to write about–and is a way to avoid burnout (which is what I think writer’s block often actually is), too.

Giving myself permission to write badly, and not being afraid to then revise as much as I need to. The way my process works, if I can just get the story down on paper, I can always revise it into something better later, because I’m a better re-writer than writer.

Also, I’m stubborn, and don’t give up easily–definitely useful as a writer!

How about as you have progressed in your career?

Learning to trust my instincts and my own (very messy!) writing process. Writers tend to give each other lots of advice. Sometimes that advice is presented as “you must do this to succeed,” but even when it’s not, we tend to hear it that way.

Could you fill us in on your back-list titles, highlighting as you see fit?

I’ve written four middle grade novels: The Phantom Rider trilogy (Scholastic, 1996) is about a girl who discovers a magical ghost horse in her backyard; Secret of the Three Treasures (Holiday House, 2006), is a humorous mystery about a girl who’s determined to become a professional adventurer, no matter what.

Congratulations on Bones of Faerie (Random House, 2009)! Could you tell us a little about the novel?

Bones of Faerie is a post-apocalyptic YA fantasy set almost 20 years after the War between the human and faerie realms destroyed most of the world. Nothing has been seen or heard from Faerie since, but the world is filled with the deadly magic the War left behind: trees that seek out human blood, glowing stones that burn with cold fire, forests whose shadows can swallow a person whole. The few surviving humans search for magic and cast it out wherever they find it, because they know magic destroyed the world.

The story’s protagonist, Liza, pretty much accepts this–until her father sets her infant sister out on a hillside to die for showing signs of magic. Liza’s mother disappears soon after, and then Liza discovers signs of magic in herself and flees the town she’s known all her life, heading into the deadly forest that surrounds it.

I wrote the opening scene when I was still living in St. Louis. I loved that opening, but after I wrote it I stopped short, because I had no idea what happened next! It took me ten years–and a lot of learning and growing as a writer–before I was finally ready to finish the book.

Once I got past that initial scene, it took me about two years to write Bones of Faerie. I spent a year or so marketing the book on my own, then some months querying agents. My agent sold the book to my editor a few months after that.

What were the main challenges in framing the story as a fantasy?

I love to read fantasy, so I frame my stories as fantasy without even thinking about it. Even Secret of the Three Treasures, my one “realistic” story, feels fantasy-sympathetic to me. I think keeping the magic out of my stories would be a bigger challenge than including it.

That yes, she really can do this! And that one day other people really will read those stories she’s writing in her notebooks right now.

I also write freelance science and health articles, as well as doing occasional other business and marketing writing. When not working I like to read (of course!) and go hiking and camping with my husband (and first reader, and fellow writer) Larry Hammer.

Right now I’m also learning how to fence, which has been a lot of fun, even if I’m not very good at it yet. I think most people can learn most things, even the things we think we can’t, if we’re willing to be really bad at them first!

I’m working on a couple other YA projects right now, and I hope to return to the world of Bones of Faerie as well. In the meantime, I have a short story set in that world online–“Invasive Species” in Coyote Wild’s YA issue (Aug. 2008).

After setting Bones of Faerie in the Missouri, I became curious what the war with Faerie looked like in Arizona–where, even without magic, the plants know how to bite. I wrote “Invasive Species” to find out!