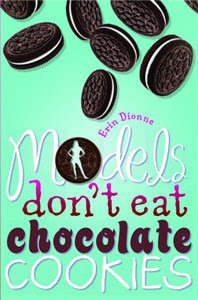 Thirteen-year-old Celeste Harris is no string bean, but comfy sweatpants and a daily chocolate cookie suit her just fine. Her under-the-radar lifestyle could have continued too, if her aunt hadn’t entered her in the HuskyPeach Modeling Challenge.

To get out of it, she’s forced to launch Operation Skinny Celeste—because, after all, a thin girl can’t be a fat model! What Celeste never imagined was that losing weight would help her gain a backbone…or that all she needed to shine was a spotlight.

A hilarious debut featuring friendship, family, mean girls and even celebrity crushes, Celeste’s story is a delicious treat that doesn’t add a pound.

Was there one writing workshop or conference that led to an “ah-ha!” moment in your craft?

By 2005, I’d been writing for years and years, submitting short stories, working with a critique group, tinkering with the same middle grade novel I’d finished in grad school (which I finished in 1999!), and freelancing. I decided that it was time to get serious about selling that novel.

So I signed up to attend the Santa Barbara Writer’s Conference as a way to mark my renewed commitment to my writing. I went with my completed middle grade, several short stories, and a lot of enthusiasm.

During the course of that week, I sat in on several workshops, networked, listened to agents and editors, and really tried to absorb as much as I could about the industry: Where was my quiet, kind of dark, family drama-based middle grade book going to go? Who should I send it to? How should I market it?

One day, I went to a humor/chick lit workshop taught by writer Wendy French. I didn’t consider my work to be a humorous or chick lit, but I had a short story in my folder that did have a funny element or two….so I brought it and read it during the session.

“Have you ever considered turning this into a novel?” Wendy said when I was done.

“But this could be a novel,” she said. Others in the class nodded.

“But I have a novel,” I repeated, all the while, thinking, what is she talking about?! Why would I want to turn this funny story into a novel? How could I even do that?!

To make a long story short, I went home, revised and sent out Dark and Sad Middle Grade Novel and searched around for another project to start.

Wendy’s comments still floated around my brain. I pulled out the short story, “On BBQ Day, No One Brings a Lunch,” and took a look at it. I had a good conflict (girl losing her best friend to school bully), a character that I loved (Celeste–wry and smart), and room to grow.

I sat down one day with a blank journal and started making notes about what I knew and where I could go. A few days later, I started writing the draft. It poured out of me in six weeks. The book basically wrote itself and became Models Don’t Eat Chocolate Cookies.

I give Wendy so much credit for shining a light on what I couldn’t see: that my style and voice had evolved over time. I had been hanging onto that finished Dark and Sad Middle Grade because it was done, not because it fit who I was or had become as a writer in the intervening years.

Humor is what works for me–something I never would have expected. That Dark and Sad novel–in a drawer, where it belongs.

As someone with a MFA, how did your education help you advance in your craft? What advice do you have for other MFA students/graduates in making the transition between school and publishing?

My MFA is actually in straight Creative Writing (Emerson College, 1999), but I concentrated my coursework in writing for children, even though they didn’t have an official designation for that.

An understanding of process, honing of my editorial skills, and being a strong critical reader were all elements that I took away from my master’s program.

My classes really taught me how to edit my work and what I needed to do in order to create a strong piece of writing. I learned how to identify the holes in my story. I learned how to read others’ work and look at it for ways to improve my own writing.

I really learned how to take criticism in a workshop, how to listen to what readers were saying about how to make my story stronger.

MFA programs come under fire a lot. Some say they churn out “cookie cutter” writers. I guess I can see how that can happen, but that wasn’t the case at Emerson. I felt as though everyone there had a very strong, unique voice, and we were able to support one another and learn from others’ work.

However, the biggest challenge, once you leave the cocoon of an MFA, is actually writing. Without a course or thesis to motivate you, life and work and everything else can easily usurp your writing time. You need to commit to your work in order to bring it to the level of publication, so protect and treasure the time that you have during your program–and carry that beyond graduation.

Also, keep in touch with your classmates! Two of my classmates from Emerson have gone on to be really successful in the field–Laurie Faria Stolarz and Lara M. Zeises–and they were my role models when I was struggling through the publication process.