Enter to win a paperback copy of Never Trust a Dead Man by Vivian Vande Velde (Magic Carpet Books/Harcourt, 2008)(originally published in 1999). From the promotional copy:

“When Selwyn is accused of murdering his rival, Farold, he is sealed in the village burial cave with Farold’s moldering corpse to await starvation or worse. Worse comes along quickly in the form of a witch who raises Farold from the dead. Selwyn thought he disliked Farold when he was alive, but that was nothing compared to working by the dead man’s side as they search for the real killer.”

Winner of the Edgar Allen Poe Award for Best YA Mystery, BBYA, Quick Pick, A SLJ Best Book of the Year. The Bulletin said, “[A] supsenseful page-turner… The pace never lets up.”

To enter, email me (scroll and click envelope) with your name and snail/street mail address and type “Dead Man” in the subject line. I’ll touch base if you win. Deadline: March 18! All Cynsational readers are eligible!

The winner of the Cynsations ARC giveaway of City of Glass by Cassandra Clare (McElderry Books, March 24, 2009) was Gina from Illinois. Congratulations, Gina!

Author Interview: A.S. King: A Poised at the Edge Author Interview from Hello Ma’am. Peek: “I didn’t write with an outline, though I did write a lot of notes, which I do for every book. Pages and pages of them—a kind of thinking out loud for me, where I bounce things around to see how they sound.”

Be yourself as a writer by Emily Marshall at Author2Author: 5 YA Authors, 5 Journeys. Peek: “Are you good at complex characters? Witty one-liners? Quirky, yet lovable heroines? Dark, mysterious plot lines? Good! Then don’t be afraid to play up your strengths and use them to your advantage.”

I was a Golden Kite Award Judge (Random facts & photos) from My Desk is a Mess: Amy Timberlake and Her Books. Peek: “What category did I help judge? Picture book text.” See the list of 2009 winners and honorees.

Writing Retreats by Mary Atkinson from Crowe’s Nest. Peek: “Settling in is a necessary part of going on retreat. It might take you an hour; it might take you three days. Either way, it’s got to be done. One of the fastest ways I’ve found to settle in to a new retreat space is to unpack my suitcase and then take a nap.”

Geektastic: Stories from the Nerd Herd edited by Holly Black and Cecil Castellucci: a review from Oops…Wrong Cookie “Where several Texas librarians write about books and stuff.” Peek: “All kinds of geek- and nerddom is explored here. I was pleasantly surprised with the breadth of topics: Star Wars, Star Trek, Buffy, academic teams, astronomy, high school spirit!, dinosaurs, online gaming, LARP (live-action role-playing).” Note: Geektastic includes “The Wrath of Dawn” by Cynthia and Greg Leitich Smith and will be released by Little, Brown in August 2009.

Congratulations to readergirlz on your second anniversary and to TeensReadToo on your third anniversary!

Wanted: Tough Questions about Diversity in Children’s Books from Mitali Perkins at Mitali’s Fire Escape. Peek: “I want the session to be salty, fun, and enlightening, and I need your help. Which changes, trends, achievements, and challenges in the industry would you hope to see discussed? What would you like to know about diversity in children’s and teen books? Anything goes, and the harder the question, the better.”

We Ask An Agent: Edward Necarsulmer IV, McIntosh & Otis, Inc. from Sara Crowe at Crowe’s Nest. Peek: “The agent should really have the name or names of editors who they think might be a fit for the project popping into his or her brain as they read. This is usually the big sign for me that an author and I may be a match.”

Congratulations to Ann Dee Ellis on the release of Everything Is Fine (Little, Brown, 2009). From the promotional copy: “Stuck at home caring for her severely depressed mother and abandoned by her father, Mazzy has only the day-to-day dramas of her neighborhood to keep her busy. But between flirting with the boy next door and worrying about the fact that she’s flat-chested, Mazzy has to face the fact that her mom is emotionally paralyzed by a family tragedy. As readers delve into the story, they’ll eventually discover what it was that tore Mazzy’s family apart, and they’ll see what it takes to put it back together.”

soup of the day by Jama Rattigan from Jama Rattigan’s Alphabet Soup. Peek: “Put on your flame retardant jumpsuit and sombrero, then let out a big OLÉ, for the master of the macabre and undisputed King of the Weenies, David Lubar, on the official release today of The Battle of the Red Hot Pepper Weenies (Starscape, 2009)!”

Book of Nonsense (CBAY, 2008) Giveaway from P. J. Hoover at Roots in Myths. Note the author of Book of Nonsence is David Michael Slater. Peek: “It’s a fun book about a set of twins, a bookstore filled with awesome books, and of course a book with nonsense letters that change and appear and disappear. If you like fantasy books or know someone who does, this is a perfect book for you!”

Check out this book trailer for Torched by April Henry (Putnam, March 5, 2009):

Sarah Garrigues: (Not so random) ramblings from an up-and-coming author. Peek: “Passionate about both children and literature, as a childcare director, I have daily inspiration for my craft.”

Thanks to Patti Kurtz and her students in “Adolescent Literature” at Minot State University for their hospitality at Monday’s online chat. Please keep in touch!

Thanks to Megan Fink for sending on her article “Tasty Treats for Books with Bite,” which appeared in the summer 2008 Young Adult Library Services magazine. In a sidebar, my own Quincie–of Tantalize (Candlewick, 2007) and soon Blessed (Candlewick, forthcoming) fame herself is interviewed! Here’s a peek from “Interview with a New Vampire”: “A shocking number of people prejudiced against shape-shifters. As someone who is wereperson-friendly, I highly recommend [Klause‘s] Blood and Chocolate to teens and Werewolf Rising by R.L. LaFevers to tweens. Obviously, these authors did their homework and found out that shifters can be good guys. Hm….or maybe they’re shifters themselves. I’ve heard that Annette has been known to howl.”

I’m honored to be the March Author of the Month at the Ultimate YA Reading Group at Facebook!

A timeless remedy for teen angst: a review by Norah Piehl of Eternal by Cynthia Leitich Smith from BookPage. Peek: “Smith has built on centuries of vampire lore to create a spooky, snarky, supernatural world all her own.” 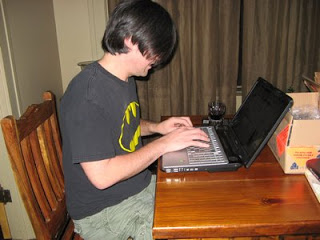 My husband and sometimes co-author is new on Facebook. If you know Greg Leitich Smith, please look for him there. You can say, “nice bangs, Batman.” 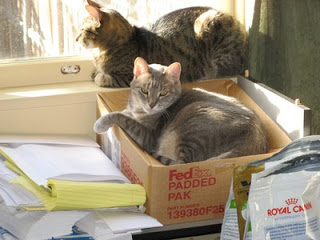 A peek into my office. Bashi (in the box) and Leo (on the windowsill) bask in the spring sunshine. Note my crack organizational system for mailing supplies.