I read everything I could get my hands on. I was particularly obsessed with Judy Blume, Gordon Korman, Christopher Pike and Lois Duncan.

Why do you write for young adults today?

I want to be part of the experience when a teenager first falls in love with reading, the way I did when I first lost myself in novels.

The first novel I ever wrote was called “Lizzie Forshort.” I was nine. My mother typed it up and sent to Bantam Books. That’s the story of my first rejection letter.

Then my short stories were rejected from a whole lot of magazines. I knew I wanted to write YA, but I decided I’d write my novel “later” and get a job in publishing. 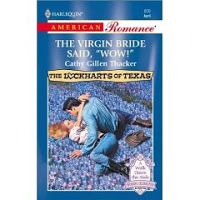 I started working for Harlequin (in the marketing department—I got to come up with cover ideas for books such as The Virgin Bride Said “Wow!” [by Cathy Gillen Thacker (Harlequin American Romance #870, 2001)]) and heard through the grapevine that they were going to start a new line of books called Red Dress Ink, which would be a chick lit line.

I decided to go for it. I wrote a proposal and three chapters and brought it to one of the line’s editors. She liked it, gave me advice and told me to keep going.

Trying to write an entire novel was definitely intimidating, but I set small goals so I didn’t get overwhelmed. When I finished the manuscript she bought it, and my first novel was published in December 2001.

After that, I was given a multi-book contract, and even though I loved my marketing job, I loved writing more, so I left to be a full-time novelist.

I decided I would try writing my YA novel. I found an agent (Laura Dail) and sent her my proposal for Bras & Broomsticks (2005). Random House/Delacorte bought it.

I love the fact that Random House now owns Bantam Books—the people who sent me my first rejection letter. It all worked out.

I would tell myself to outline. I did not outline my first book Milkrun (Red Dress Ink, 2001), and it was harder to write because I had no idea where I was going.

I started outlining with my second book and I still outline everything before I start a draft. I’d also tell myself to get an agent right from the start. I only found Laura for my fourth book, and I wish I’d had someone looking out for me from the beginning.

Reading everything: mysteries, thrillers, classics, romance, chick lit, teen lit…then striving to write the kinds of books I like to read.

In a way, I’m always my target reader. If I can’t make myself laugh, I won’t be able to make anyone else laugh. I’ve taken a few creative writing classes and workshops, but I have to say, I’ve learned a lot more from exchanging manuscripts with a few trusted author friends. I’ve also been lucky and had fantastic, brilliant editors who’ve taught me a ton.

Could you please update us on your YA back list?

Congratulations on Parties & Potions (Delacorte, 2008)! Could you tell us a little about the book?

It’s the fourth book in the Magic in Manhattan series.

Rachel and her sister Miri are both debuting at a magical party called a Samsorta, which is a debutante ball for witches. And there will be boys at the ball: cute, charming, witch boys.

Of course, Rachel is still madly in love with her boyfriend Raf…but Raf doesn’t know her big, witchy secret. And she can never tell him. Or can she?

Both from a craft and publishing perspective, how did this series evolve? Did you know there would be multiple books going in?

I sold Bras & Broomsticks and Frogs & French Kisses together back in 2004. I had the idea for Spells & Sleeping Bags (I wanted Rachel to get her powers and for them to kick in and be out of control at sleepaway camp).

Spells was supposed to be the last one, but then Random House asked if I would do one more…and I was thrilled to. I missed my witch girls!

What have been the series challenges? What have you loved about it?

Remembering back-story details four years later is definitely a challenge. When you’re writing a stand-alone all the particulars are right there in your document. When you’re writing the fourth book in a series five years after you’ve finished the first one, you tend to make mistakes on some of the smaller details…like the dad’s name.

On the other hand, I love that the rules of the characters and the world are already created. That gives me the freedom to really focus on the story and the plot—my favorites.

Congratulations on the publication of How To Be Bad, co-authored by E. Lockhart and Lauren Myracle (HarperTeen, 2008)! Could you tell us a little about the story?

Vicks is the wild child whose boyfriend has gone suspiciously quiet since he left for college; Mel is the newcomer desperate to be liked; and Jesse will do anything to avoid revealing a life-altering secret.

Each has her own reason for wanting to get the heck out of their nowheresville town, even just for the weekend. So they climb into Jesse’s mom’s beat-up station wagon and head south.

Hearts are broken, friendships are tested, and a ridiculously hot stranger changes the course of everything…

What was the initial inspiration for writing this book?

MySpace! Really. I had started a MySpace group for people who loved YA lit. Emily and Lauren were on it. I asked, “What’s everybody reading these days?”

Emily responded that she’d just finished reading Nick & Norah’s Infinite Playlist by David Levithan and Rachel Cohn (Random House, 2006), and Lauren wrote: “That one’s in my stack—I’m eager to read it. In fact, I really want to write a collaborative novel one day.”

As soon as I saw those posts I knew that I had to be the one to collaborate with her.

And then Emily posted: “Lauren, anytime baby; say the word,” and I began screaming, “Me, too! Me, too!” to my computer screen.

I e-mailed Emily and then she e-mailed Lauren, and off we went.

What advice would you give to writers embarking on a joint manuscript?

Take the opportunity to learn from each other. Know that you don’t have to be an expert in everything—let yourself be edited.

Lauren is a character and motivation expert, and Emily is the queen of dialogue and language. Letting them edit my chapters was terrifying but eye-opening and incredibly helpful.

I also had to learn not to afraid of jumping in and using the red pen on their chapters when they needed to be edited.

I’m a big fan of the delete button and learned to trust my gut and not be too intimidated to write boring in big letters on one of their paragraphs. Although I usually added a much love afterward.

Write one page a day. Before you know it you’ll have a finished book. Read often, and read everything. Then write the kind of book you want to read.

You also write books for grown-ups. What do you see as the differences between writing books for the YA and for the adult market respectively?

Finding the balance between reflecting reality and creating reality is trickier when writing for teens. Take labels for example–I sprinkle them liberally into my adult fiction for realism, but I’m far more careful in my teen books. I feel more pressure in terms of my own responsibility as a writer since a fourteen-year-old is far more impressionable than a twenty-four-year-old.

I love speaking and promoting. I love writing, but I hate being by myself all day. I love the interaction of touring and meeting readers. I also used to be in marketing so I try to apply what I learned to my own books. I probably spend about sixty-five percent on writing and, um, sixty-five percent on all the rest. (Balance? What’s that?)

As a reader, what were your favorite YA books of 2008?

I loved Bliss by Lauren Myracle (Abrams). I loved The Disreputable History of Franky-Landau Banks by E. Lockhart (Hyperion). I loved Before I Die by Jenny Downham (David Fickling, 2007).

There’s a world outside of books? When I’m not writing, I’m usually reading.

My husband and I used to travel a lot, but at the moment I’m eight months pregnant and housebound. I’m trying to read books on what to do once Baby arrives.

(I guess that still falls under the world of books, eh?)

Gimme a Call—my new novel about a high school freshman who finds a magical cell phone and calls herself in the future as a senior. It should be coming out summer 2010.