In celebration of the ten-year anniversary of www.cynthialeitichsmith.com, I asked some first-time authors the following question: 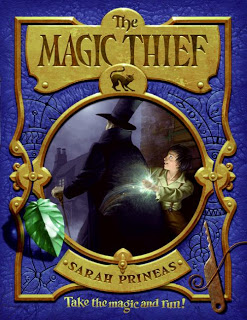 As a debut author, what are the most important lessons you’ve learned about your craft, the writing life, and/or publishing, and why?

Here’s the latest reply, this one from author Sarah Prineas:

My book came out on June 3rd, and it’s been an odd, crazy time.

While promoting that book, I revised book two in the series and finished book three, which goes off to my editor shortly.

There isn’t a whole lot of time, I’m finding, to bask in the glow of having a book out. Publishing has a hungry maw, and we writers need to have new manuscripts ready to throw into the maw, to be chewed up and spat out as finished books.

What I’ve found, given that situation, is that there’s no waiting around for a muse to visit or for inspiration to strike. A professional writer has to work hard to have manuscripts ready for chewing, and if she doesn’t, well, then she doesn’t have a career, just a book.

I’m in this for the career.

After finishing the first book, I worried a little about choking, since I wasn’t absolutely sure what the second book was going to be about, but since then I’ve learned that I can write into the void, and that I enjoy writing as an act of discovery.

I’ve also learned to write no matter where I am. I still don’t have a home office, so I move around the house, from kitchen table when I’m home alone, to comfy chair in my bedroom when the house is full of kids.

My publisher has been sending me to lots of events, and I’m finding that I can write during the down times; in fact I get lots done in hotel rooms and airport waiting areas.

The other thing I’ve learned is that my ideas about how publishing worked were kind-of naïve. My book deal worked out, as my agent said, “the way deals are supposed to happen but never do.” No angst or heartache involved.

But I’ve learned that even though publishing is partly run on the love of books, it’s also a cut-throat business. If I don’t keep writing books, this business will leave me behind without a thought. It’s a tough lesson, but an important one, for me.

The final thing I learned is that once a book is out, the author has to let it go. You just can’t control how it’s going to do out there in the big world, so you might as well focus on the next project.

Read a Cynsations interview with Sarah.