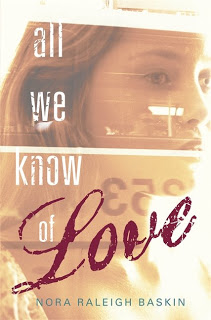 When I first started seriously sending my work out for publication, I wrote adult fiction, but I found that all of my stories were about children, primarily about my own memories of childhood.

One evening, a fellow continuing education student from a writing course I was taking asked if I had ever considered writing for children.

After getting over what I took initially as an insult, I began to consider it. And then doing it. When I started getting nicer more personal, handwritten rejections—I knew I was on to something.

My path to publication really began when I starting writing for children. One Bantam editor wrote at the bottom of her rejection (or it is my rejection?) that I should look into SCBWI. After wiping my eyes and blowing my nose (I cried a lot along this path), I did join SCBWI.

Through it, I found a critique group and attended some conferences. It made a huge difference. It showed me how to be a professional, how to work and rework, and it gave me a community of writers.

It was still five more years before my first novel was accepted, but there is nothing I wrote during that time that I would ever try to publish now. It was like being in graduate school. I learned my craft, the business, and fortitude.

I am not sure I would do anything differently because it really was an important process, but I can tell you what worked for me along the way—reading. A lot of reading.

I came across Belle Prater’s Boy by Ruth White (FSG, 1997), which had recently won a Newbery honor, and it changed my life, well, my writing life at any rate.

It was as if I finally had permission to write the story I had always wanted to write—about growing up without a mother–but had felt was too sad, too adult, or too specific.

Ruth White wrote a deeply moving story about a deeply sad event, but she did it with humor and poignancy and for children. It was like a light was turned on in my head.

So the most useful to me was learning to be truthful in my writing. To write the story I cared the most about–not what I thought would sell, or fill a void in the market, or appeal to the most people. I think when you write for yourself–you write best for others. I guess it kind of holds true in life too, doesn’t it?

Could you please update us on your recent back list, highlighting as you see fit?

My first novel What Every Girl (Except Me) Knows (Little, Brown, 2001) is still selling well, and after, that my sports novel Basketball (Or Something Like It) (HarperCollins, 2005) is probably my most commercially popular.

Almost Home (Little, Brown, 2003) is as close to autobiographical, chronologically speaking, as I have written and is also very close to my heart.

My agent recently regained the rights to In The Company of Crazies (HarperCollins, 2006), and we are looking to do a paperback edition.

But it is my last middle grade, The Truth about My Bat Mitzvah (Simon & Schuster, 2008), that has gotten me the most speaking engagements around the country. I learned a lot about a niche market from that book.

At the same time, it is an extremely personal novel about my own search for identity and discovery of my Jewish heritage.

Congratulations on the publication of your debut young adult novel, All We Know of Love (Candlewick, 2008)! Could you tell us a bit about the book?

This is a story about a 15 year-old-girl in a fairly self-destructive love/sex relationship with an older boy. The boy is not bad or abusive, but he’s certainly a player, and the only way Natalie can free herself from her obsession to be loved by this boy is to embark on a journey to find the mother who abandoned her four years earlier.

The truth is my mother committed suicide when I was three and a half, which is the subject of my first middle-grade novel What Every Girl (Except Me) Knows (Little, Brown, 2001).

So the inspiration for writing this book was my personal journey to find my mother, and to look at the self-destructive relationships I’ve had in my life because of her “intentional” death.

I needed to imagine—that if my mother hadn’t died but, rather, had abandoned me (which is as close to suicide as I could create as a writer)–then what would happen if I tracked her down and confronted her. What would she say when I asked her: why?

I needed to write this book so I could find out the answer to that question.

Thank goodness I had an agent, so while I went into a complete panic that I would never publish again (and worked on a new middle grade novel with Simon & Schuster), my agent shopped it around.

But since the story is somewhat experimental in structure and tone, it took a while, about a year, before it was bought. And I am so happy it was Candlewick.

Of course it was another year and a half before the actual pub date, so it’s been a good three years and a half years, at least.

What were the challenges (literary, research, psychological, logistical) in bringing it to life? Could you tell me about your choice to include quotes at the beginning of each chapter?

Even though this book is probably more semi-autobiographical than all my other semi-autobiographical novels, I did do a lot of research. I had to research the information in the book about language, about Inuit words for snow, about Spanish words for love, and even about Freudian and Jungian dream theory. I also wove in quite a few mother-child psychological principles such as “mirroring”.

I worked very hard on finding quotes that were “about love”. In fact, the book’s original title was “About Love,” taken from an Anton Chekhov short story. But I also wanted quotes that were specific to the “kind” of love each particular chapter would be exploring. I wanted the quotes to not only to aid me in the writing, but also to illuminate something in the narration for the reader.

And funny you should ask about logistics because, after the whole book was written, I had to go back and do a very exact time line; how long it would take a bus to travel from Connecticut to Florida? Where it would stop along the way? And what time it would be at each stop?

I had to consider the weather, geography, and time, and even though I always do this to some degree when I write, I never had to draw a map and timeline out on index cards and lay them out across my floor.

Still, I knew I had to write the “story” first and then adjust the logistics. It would never have worked for me the other way around.

What inspired you to jump age-level markets from middle grade to young adult?

I wasn’t really inspired to jump age level as much as I was driven to tell this story, and the only way to tell it was with a character that was sexually active.

I wanted to write about the way girls (and boys), women (and men) confuse sex and love.

How did having an older character and audience affect your process and perspective?

It affected everything. It freed me to write with as much complexity and adult language as I could. I reached as high as I could in terms of metaphor and symbolism.

I have always loved using those techniques, and I do use them in my middle grade books, but not to the level I attempted to here.

I could reference anything without having to consider my audience. I didn’t write to teenagers or young adults, I wrote to my most intelligent self (and I don’t say that with arrogance at all!).

I truly don’t think there is much difference between adult and YA writing other than vantage point, the POV from which the narrator or main character is telling the story.

Off and on I have had critique groups; then because people have different commitments or time constraints it becomes difficult. But I love them.

I need the constant connection to other writers, and I very much like to bounce ideas off other people who understand.

I meet monthly with Tony Abbott and Elise Broach (author interview) for breakfast. Our Children’s Authors Who Breakfast breakfast.

I also have the same few friends (one, since my first year of college) who read my work and give me exactly what I need, which is sometimes –often—just encouragement.

Early in the process I am not ready for specific criticism. I have learned to be careful about that. Too much feedback too soon can be the kiss of story-death.

What do you do outside of the world of youth literature?

I teach creative writing and children’s book writing to adults. I work with kids in elementary, middle and high school, and this fall I begin teaching college students at SUNY Purchase (my alma mater!).

And the best part is: kids or adults, nothing changes. Writing is writing. I don’t really think that you can “teach” writing, but I find great joy in helping students find their voice. Hopefully, I allow them a place to take risks and maybe learn some basic skills, too.

Not to mention I am a mother of two teenage boys. That takes up quite a bit of time.

This coming March I have middle-grade novel written in the first person point of view of an autistic 12-year-old boy titled Anything But Typical (Simon & Schuster, 2009). It is also very experimental in structure and voice, and I am very excited about it.