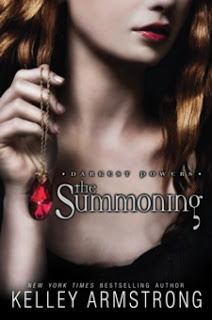 “Kelley Armstrong has been telling stories since before she could write. Her earliest written efforts were disastrous.

“If asked for a story about girls and dolls, hers would invariably feature undead girls and evil dolls, much to her teachers’ dismay. All efforts to make her produce ‘normal’ stories failed.

“Today, she continues to spin tales of ghosts and demons and werewolves, while safely locked away in her basement writing dungeon.

“Kelly lives in Ontario, Canada with her husband, kids, and far too many pets.”

Congratulations on the publication of The Summoning (Darkest Powers, Book 1)(HarperCollins, 2008)! Could you fill us in on the story?

The Summoning is the first part of a trilogy. Chloe Saunders has spent her life moving from school to school, always being “the new kid.” When she entered ninth grade, her dad agreed to let her enroll in a Buffalo school of the arts, and stay there until graduation.

So Chloe is finally a normal fifteen-year-old, and nothing could make her happier. At her new school, she’s pursuing her dreams of becoming a Hollywood director, while making friends and meeting guys. A perfectly normal teen life.

Then, suddenly, she starts seeing ghosts–everywhere, talking to her, demanding things, chasing her. She’s sent to a group home, where she’s determined to accept her diagnosis, keep her head down and get out. But she soon begins suspect she really is seeing ghosts. And she begins to suspect Lyle House isn’t what it seems.

I write a similar series for adults, and the idea for The Summoning came out of the second book. Writers are often asked where they get their ideas, but often the real question is how they find time to turn all their favorite ideas into stories. That second book had given me an idea that never quite fit into the series.

The more I thought about it, the more I realized it was best suited for a story about supernaturals just coming into their powers. In my fictional universe, though, that happens at puberty. So it needed to be a teen story.

Then, in 2005, I decided that I wanted to try turning it into a novel. The problem was finding the time. I already had a book-a-year series, and had recently contracted for two crime novels, so it was really hard to justify writing something “just for fun.” Now, I also run an online writing group on my website, and I’d been considering sponsoring a NaNoWriMo group (where writers try to write 50,000 words in November). To properly encourage my group, though, I’d need to participate…and that’s where I saw the chance to write my YA book.

So I wrote The Summoning in one month and sold it and… Well, no. I did get a first draft done. And I realized that while I really liked the characters and the general setup, the plot needed work. So I put it aside to mull over. A year later, I had a reworked plot. I then rewrote the first 100 pages, and my agent sold it based on that and the new outline.

While I kept a few scene ideas, the novel was a page one rewrite. I’d done something similar with my first book, so I knew that while it seems like a lot of work, I prefer doing a full rewrite to cut-and-paste job on an old manuscript. And it did take more than one month for the new draft. I’m fast…but not quite that fast if I want something decent!

The biggest challenge was psychological. When I realized this story needed a teenage protagonist, I balked and it was a long time before I could bring myself to seriously consider writing it. I write first-person, meaning I don’t just need to get into my narrator’s head, but take on her voice. I’m…a little ways from being 15. I have a daughter that age, and there’s nothing better than that to make you realize how far removed you are from an age group!

As it turned out, it was really just a psychological block. Once I started working on Chloe as a character, I was able to pull up that teenage self inside me with surprising ease. The more I worked with her, the more I remembered what it was like to be that age and, more importantly, what it felt like to be that age.

You’re an established, bestselling author for the adult market, and this is your first YA novel. What about writing for the young adult audience appeals to you?

There are two main aspects that appeal to me: one reader-oriented, one totally selfish.
With my adult novels, I do get a lot of teen readers, and they’re wonderful–they’re so enthusiastic and quick to tell me what they like and dislike. But I’ve always felt bad, having only one main character their age–who is quickly outgrowing her teens! So the chance to write novels specifically for that audience is great.

And for the selfish reason, it’s something new–a fresh and original (for me) approach to storytelling, with new avenues for creativity and new challenges to explore.

Despite a wide age range of narrators in my adult novels, adults share a basic set of core concerns that are different from teens, and they have a very different set of tools for dealing with them. It’s a fresh take on “my world” and I love it.

Not to get discouraged. Which, I suppose, is what a lot of published writers would tell their younger selves. I had a lot of early encouragement, so I grew up with the misguided idea that if I ever managed to finish a whole novel, naturally it would be published.

When I reached my twenties and started taking workshops and joining writing groups, I discovered it’s definitely not that easy! So I prepared for rejection, but I think that having had so much encouragement, as hard as I tried to be modest in my expectations, I couldn’t help but think it would be different for me. It wasn’t. And I’d get horribly discouraged.

There were periods when I couldn’t bring myself to write because, as much as I tried to do it just for myself, writing resurrected the dream of publication and the disappointment was so hard to deal with.

How about on the subject of writing fantasy specifically?

I’d tell myself to keep writing fantasy, despite anyone’s well-meaning advice to the contrary. I’ve always written fantasy and horror, but what was once quite acceptable in my childhood and teens became…less acceptable as I reached adulthood.

I was gently–and repeatedly–advised to get more serious, more mainstream. It didn’t help being Canadian, with our strong tradition of literary fiction. I was in my twenties before I could name a Canadian genre writer. There are plenty out there, but in the media and school system, all we see is Canadian literary fiction. As a child, I had the misguided notion that to write genre horror or fantasy, I’d need to move to the U. S.!

You mean there’s supposed to be time when I’m not writing? Some days, I have to remind myself of that. I’m in the very happy position of having turned my favorite hobby into a career, so I’ve had to expand my list of recreational activities. Reading, of course–I’ve been an avid reader all my life. Cooking and baking–my kids appreciate the baking more than the cooking. Movies–I spent my teen and college years working in a movie theater because it meant unlimited double passes. Computers–I’m a former programmer so, yes, I’m a computer geek, meaning I like to do my own website, design my book trailers, etc.

I think the biggest surprise that came with being published was discovering that I can’t just spend my days writing and editing. At one point, the “business” side of writing was taking more time than the creative side, and that was very frustrating. The best advice I got was from my accountant. He suggested that I hire someone to do the parts that didn’t need my personal touch. It took a couple of years for me to take that advice.

Having an assistant seemed almost…pretentious, like something only really big-name writers did. I ended up hiring my sister when she was pregnant with her second child and looking for administrative work to do from home. That was the best move I’ve made. Now I can stick to the parts I really enjoy: writing, editing, the website, speaking engagements, answering reader email etc. Without her, I wouldn’t have been able to consider doing a young adult trilogy in addition to my main series.

The sequel to The Summoning comes out in April ’09. It was scheduled for summer, but I’ve finished it, so it was bumped to spring. It’s called The Awakening. It’s hard to say much about it without giving away spoilers for The Summoning, only that it’ll answer (most of) those pesky unresolved questions and will add a few new and (hopefully) unexpected twists to Chloe’s story.