The Austin children’s-YA book creator community is hard-working, up-and-coming, and bursting with talent. We also like to play.

Folks met for an informal get-together at Waterloo Ice House north last Wednesday night. YA author Jennifer Ziegler was our location scout, and she did an amazing job! 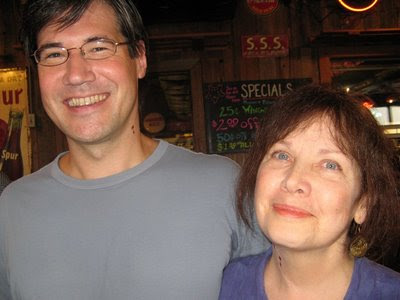 Say howdy to my very cute husband and sometimes co-author Greg Leitich Smith and Frances Hill, author of The Bug Cemetery (Henry Holt, 2002). Frances is also an illustrator. If you’ve ever been to our home, you may remember her collage work in the guest room. 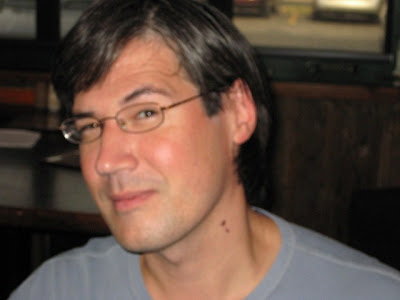 You may be wondering why they’re both sporting faux fang marks. Let’s just say it’s a long and intriguing story, fraught with drama and peril. Envious? You can order your own from Boutique de Vampyre in New Orleans. 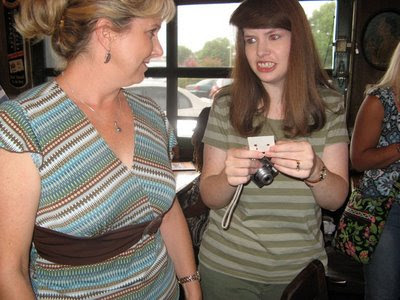 Here, Donna Bowman Bratton and Alison Dellenbaugh may be contemplating fang marks for themselves.

Donna writes short stories, fiction, and non-fiction for the children’s magazine and book markets. Her story “Leader of the Band” appeared in the anthology, Mistletoe Madness (Blooming Tree, 2004). She also writes for newspapers and was one of the pages at the recent Awesome Austin Writers Workshop.

Alison is a humor and children’s writer. You can find some of her work in Summer Shorts (Blooming Tree, 2006). Her all-around marvelousness also includes having been one of 50 nationwide winners of Oscar Mayer’s 2004 “Oh I Wish” contest. Alison used her day in the Oscar Mayer Wienermobile to “give free books (and wiener whistles, of course) to kids at the Cedar Park Public Library in Cedar Park, TX, and at the Faulk Central Library in Austin, Texas.” How cool is that? Don’t miss Alison’s report (with pics), Write Night! 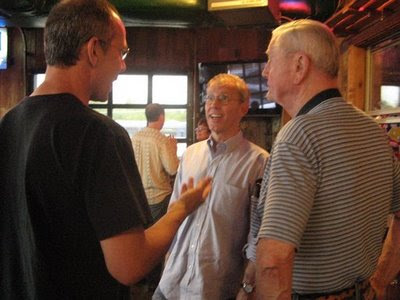 Brian is Frances’ husband and the author of both Wonders of the World (Flux, 2007) and My Road Trip to the Pretty Girl Capital of the World (Cricket, 2003), that capital of course being Austin. He’s celebrating a recent YA novel sale to Candlewick Press, and we are standing in solidarity against the local Delacorte dames and dude (Shana Burg, April Lurie, Margo Rabb, Jennifer Ziegler and Varian Johnson)–they’re a formidable bunch. Read a Cynsations interview with Brian.

Mark is one of our author-illustrators. Mark has numerous books to his credit, including the award-winning Raising La Belle (Eakin, 2002). Check out The Admiral’s Blog, How To Be a Children’s Book Illustrator: Art School in a Blog, and read a Cynsations interview with Mark.

Jerry is a rare, self-publishing success story. A retired geologist from The University of Texas, he founded Rockon Publishing in 2002 with the mission of creating poetic picture books for kids about earth-related sciences. He’s just back from the ALA conference in Anaheim, where he landed big sales with public libraries in California (among others). Look for Soil: It’s Not Just Dirt (2008). Read a Cynsations interview with Jerry. 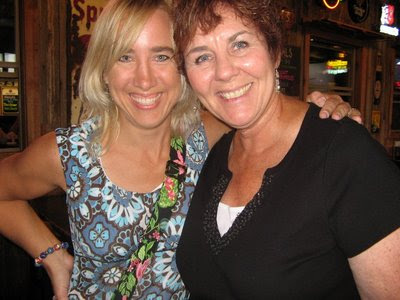 It’s a big year for these two writers!

P. J. Hoover is the debut author of The Emerald Tablet (Blooming Tree, 2008) and a member of the Class of 2k8. You can also find her at her blog, Roots in Myth and check out her event report (with pics) Fab Austin Writing World.

Debbie Gonzales is a new graduate of the Vermont College of Fine Arts! She is a model for attitude, work ethic, and craft–look out world! 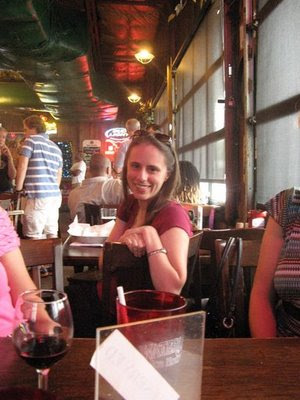 Speaking of Blooming Tree, Madeline Smoot is Tricia’s editor, a BookPeople BookKids bookseller, and a novelist. How does she do it all? 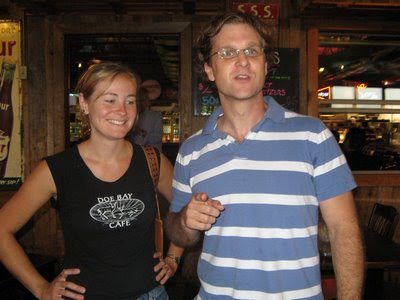 Speaking of multi-talented folks, Sean Petrie is a writer-stand-up comedian-lawyer and now a law professor at UT. It was a treat to meet his girlfriend Sara. 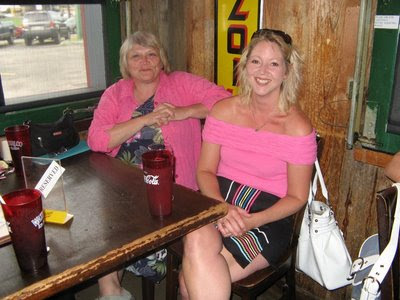 These pink ladies are Lila Guzman and Carmen Oliver. Lila is the author of numerous books, most recently George Lopez: Latino King of Comedy (Enslow, 2008). Read a Cynsations interview with Lila. Carmen is a children’s magazine and book writer. She also was one of the pages at the recent Awesome Austin Writers Workshop. Read her LJ report on the get together! 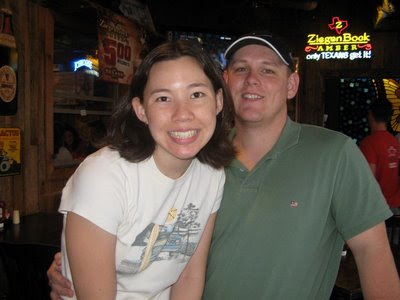 The big smile belongs to the lovely Jo Whittemore, shown here with her husband Roger. Jo is the author of The Silverskin Legacy trilogy (Llewellyn) and is past the finish line on the most successful agent search in recent (or distant) memory. Read Jo’s event report and a Cynsations interview with Jo. 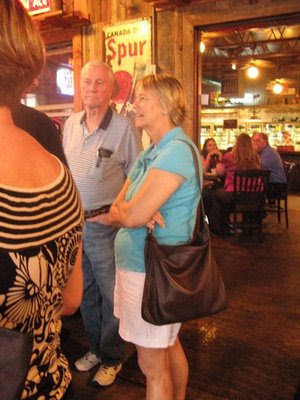 I’ll call these next three photos the “Jerry with…” series. Up first, Jerry is with Jane Peddicord, the author of such picture books as The Special Little Baby (Harcourt, 2007). Read a Cynsations interview with Jane. 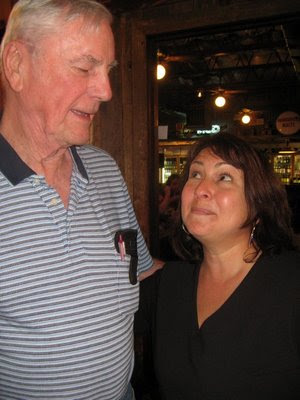 Next up, we have Jerry with writer-illustrator Debbie Dunn. Debbie is a recent Vermont College grad and a former Austin SCBWI regional advisor. Her daughter was also at the party (but, again, no kid pics on the ‘net). 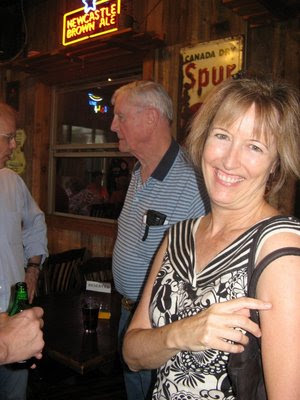 Finally, we have Jerry with Anne Bustard! Anne is the author of Buddy: The Story of Buddy Holly (Simon & Schuster/Paula Wiseman, 2005) and a first-semester student at Vermont College. She also has this amazing blog, Anneographies, which features picture book biographies posted on the subjects’ birthdays. Read a Cynsations interview with Anne. 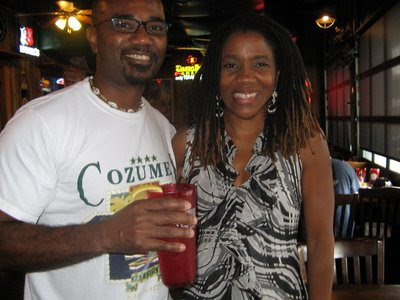 Author-illustrator Don Tate was kind enough to bring his lovely wife Tammy. Don is a successful illustrator who recently made his first sale as a writer to Lee & Low and a co-founder of The Brown Bookshelf. His many titles include The Hidden Feast, written by Martha Hamilton and Mitch Weiss (August House, 2006). See his report on the event, Austin Youth Lit Creators Social, and read a Cynsations interview with Don. 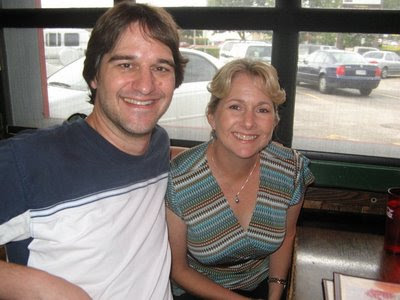 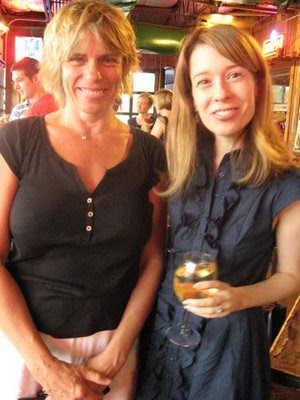 Here we have authors Lindsey Lane and Margo Rabb. They both have good news!

Lindsey is a first-semester student at Vermont College (and the author of Snuggle Mountain (Clarion, 2003)). She also has a new blog, This and That.

Margo’s much acclaimed debut novel, Cures for Heartbreak (Delacorte, 2007, 2008) is now available in paperback. Margo is new to us from New York City, and you can keep up with her at Books, Chocolates, and Sundries. 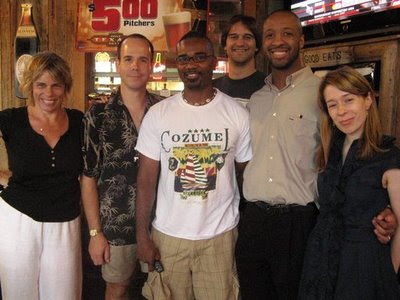 Let’s see… Who here haven’t I already introduced? Ah, Chris Barton of Bartography fame is the second writer from the left (by Lindsey) and Varian Johnson is the second from the right (by Margo).

Chris is just back from a retreat for clients of literary agent Erin Murphy, and he’s already sold three books–to Little Brown, Dial, and Charlesbridge respectively–before his first has been released.

Varian is a “hot new thing” this year on the YA book scene with My Life As a Rhombus (Flux, 2008). He’s also a co-founder of The Brown Bookshelf and a student at Vermont College, where he recently received The Alumni Award. You can keep up with his writing life at They Call Me Mr. V, including his report “Me and My Peeps” on the get together (with pics). Read a Cynsations interview with Varian. 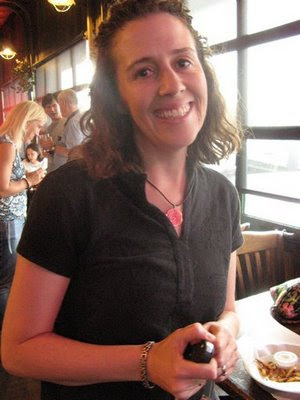 Shana Burg is a newcomer in more ways than one, having moved to Austin from the Boston area and as the debut author of A Thousand Never Evers (Delacorte, 2008), which is getting exciting award buzz. Don’t miss her blog, and read a Cynsations interview with Shana. 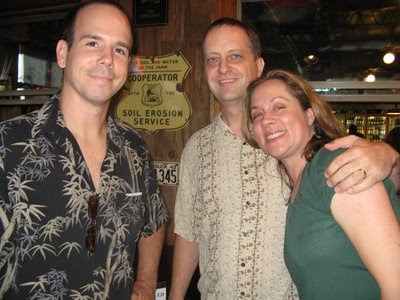 Here’s Chris with Carl and Jennifer Ziegler. She’s the YA author of Alpha Dog (Delacorte, 2006) and How Not to Be Popular (Delacorte, 2008), both of which are set in Austin. Check out her LJ, and read a Cynsations interview with Jennifer. Thanks again to Jenny for finding the perfect location! 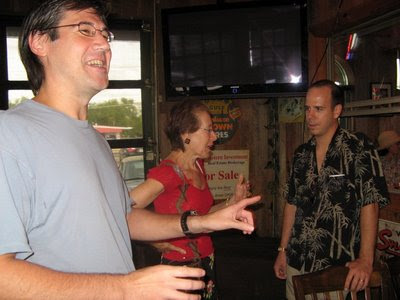 You can catch just a glimpse of Cynthia Levinson between Greg and Chris. Cynthia does a lot of children’s magazine writing and just signed with agent Erin Murphy to represent her book manuscripts. 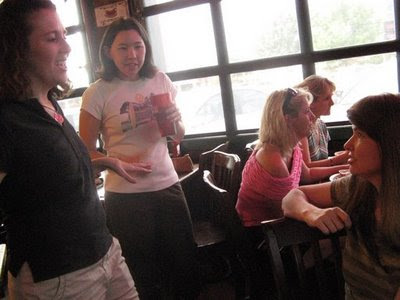 Once again, here’s Shana, Jo, and Alison chatting toward the front, Carmen and Donna in the back booth. My apologies to all I didn’t catch in the photos. The lighting was a bit weird as the sun went down.

To me, writing for young readers is foremost about craft and community. I’m honored and grateful to be part of Austin’s youth lit scene. It’s a genuine, down-to-earth, fun-loving, and supportive crowd. I’m as inspired by my local peers’ talent and commitment as I am appreciative of their company and good cheer. Thanks to all!