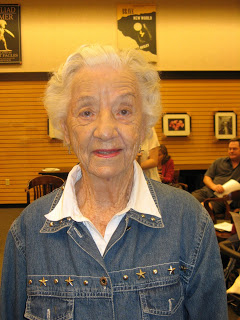 Betty X. Davis spoke on “The Remarkable Rewards of Writing” at the Austin SCBWI monthly meeting last Saturday. Betty’s stories are hers to tell, but for a taste, she began writing in the early 1920s (at age five). She grew up in a Quaker family, holds a master’s degree, was married to a law professor who also was in the FBI, and raised eight children. She’s a pre-published YA writer who’s won a couple of high-profile contests, penned plays, authored both a curriculum book for speech therapists (1987) and a short story in Spider, and composed many letters to the editor.

Betty talked about all that and more–about finding a letter she’d written decades earlier in the family archives, about another that she’d penned to comfort a grieving widower, and about having “plenty of time” to write once she had “only two children” left at home.

It was what I’d call a “heart” speech. By turns, funny and fascinating, insightful and inspiring. Betty reminded us, through her story, what it meant to be a writer in the truest sense.

By today’s conventional standards, Austin’s youth writing community is up-and-coming strong. Although the group is one of the newer SCBWI chapters, we continue to grow fast and include a tremendous number of 21rst century debut authors. We do our share of professional development programs and, from what I understand, more craft programs than most. Both are important. But we don’t always taken the time to see the big picture, to appreciate the meaning of it all, like we did on Saturday under Betty’s remarkable leadership.

I’m wowed by Betty X. Davis, and I vote for more talks from the heart.

The photos below were taken at another recent meeting, featuring rising star Jo Whittemore, sharing her insights on finding the right agent: 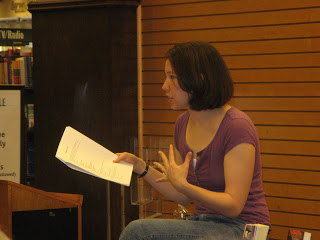 Jo is the author of The Silverskin Legacy trilogy (Llewellyn).

Read her LJ, visit her MySpace page, and read a Cynsations interview with Jo. Peek: “I’ve always loved fantasy novels, but my favorites have been the ones where the hero leaves this world for another. It’s not only the discovery, it’s also the fact that when you first enter a new world (or school or city), nobody knows who you are yet, and you can break out of any mold in which people have placed you in the past. No longer are you Megan, the plain tomboy. Now, you’re a sword-wielding heroine!” 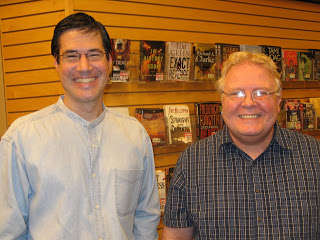 Read Greg’s blog and a Cynsations interview with Greg. Peek: “…I’ve always been interested in the interaction between science/technology and rest of our culture (C.P. Snow wrote a seminal volume in the 1950s called The Two Cultures, in which he opined that those who do math and science are incomprehensible to those who don’t and vice versa – I believe his recommendation was that science types should take more courses in the humanities and humanities types should take more math and science. Go figure.). Nowhere does that interaction come to a head more prominently than in the courts – a ‘fact’ in law is not necessarily a ‘fact’ in science (or any other kind of reality, for that matter). 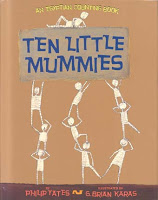 “Galileo is, of course, the most prominent case of this, so I thought it would be interesting to do a science fair story in which, somehow, the science came to be on trial.”

Phil Yates is the author of Ten Little Mummies (Viking, 2003).

Read a Cynsations interview with Phil. Peek: “Now of all this research I probably ended up using about 80% of what I read. There was not time to give a scenic tour of Ancient Egypt; the story had to move quickly and the setting became merely a place where mummies could play, but, at the same time, we would discover Egypt’s historical significance.” 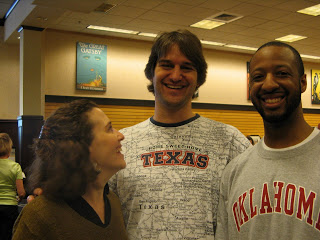 Debut author Shana Burg is hosting a launch party for A Thousand Never Evers (Delacorte, 2008) from 6 p.m. to 7:30 p.m. June 14 at BookPeople in Austin. Shana is new to us from the Boston area, and we’re so thrilled to have her as a member of the community.

Check out Shana’s blog. Peek: “The box of books arrived just before dinner Wednesday. It took me a good hour to get up the guts to open it and another twenty four to start reading. Would my vision for the story hold up in reality?”

Read a Cynsations interview with Brian. Peek: [On the writer’s life] “I love the flexible hours, the feeling of satisfaction from finishing a manuscript, and the chance to talk with kids about writing and publishing. Sometimes the writing process itself is about as much fun as folding the sock load, but overall the whole process of creating a story and characters is uniquely rewarding.”

Varian Johnson is the author of an adult novel Red Polka Dot in a World Full of Plaid (Genesis Press/Black Coral, 2005), which was on the Essence magazine bestseller list and is suitable for teens, as well as his new debut YA novel, My Life as a Rhombus (Flux, 2008). Read Varian’s blog, They Call Me Mr. V, and visit Varian at MySpace.

In addition, Varian is a co-founder of The Brown Bookshelf. Read a Cynsations interview with the founders. Here’s a peek:

Varian Johnson: “The idea for starting an community similar to The Brown Bookshelf had been bouncing around in my head for a while, but it wasn’t until I took note of the statistics compiled by the Cooperative Children’s Book Center that I truly took steps to start the initiative.

“According to the CCBC, out of the approximately 5000 trade children’s books published in the United States in 2006, 87 were written by African Americans–2 percent, if you’re generous with the rounding.

“Based on those statistics, and subsequent conversations with Paula [Chase-Hyman], I concluded that if we started the Brown Bookshelf, we would have two main responsibilities: 1) to increase the number of African-American children’s lit authors; and 2) to find a way to highlight the 2 percent that are being published now.”