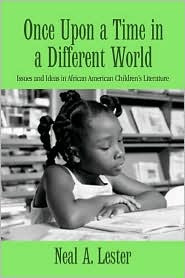 How does your own family background inform/inspire your scholarship?

My parents are both African American. My spouse of 25 years is Argentine and Italian, so our two children are “biracial,” for lack of a better term.

My realities as a teacher and scholar of color are very much informed by this complicated perspective of being a parent to two brown children who are both like me and both like their mom.

When our daughter was born 19 years ago, my wife and I looked vigorously for children’s books with other interracial (black/white) family couplings. We also looked for books with our daughter’s name, Jasmine, as a character name, knowing fully that children identify with what seems like them.

As for the interracial dimension, one book we particularly appreciated was The Rabbits’ Wedding [by Garth Williams (HarperCollins, 1958)], which has a black rabbit marrying a white rabbit. My wife and I wanted to make sure first that our daughter, and then three years later, that our son had books with multicolored moms and dads and with multicolored children.

Images are clearly important to our self-esteem as children and as adults, so a good bit of my work deals with the multitude of children’s texts—toys, greeting cards, ditties, nursery rhymes and fairy tales, commercials, print advertisements, and picture books—created for and about children although not necessarily by children.

And beyond race, my focus on gender and sexuality also come into play as reading and teaching stories about Father, Mother, Dick, and Jane inherently involve images on the page and cultural narratives about gender relations, race relations, class structuring, and prescriptions of heterosexuality. All of these ideas are present in my essays in the collection in various iterations.

Why is it important for young people to see characters like themselves in the pages of their books?

Self-validation for us all on some important level comes from seeing ourselves, especially when as playwright and performance artist Anna Deveare Smith contends, “The mirrors of society do not mirror society.” Television, billboards, magazines, newspapers, books, and music all mirror limited and limiting constructions of the world and society.

It is imperative that all responsible and conscientious adults respond to efforts at representing all children in all projected and imagined realities. All children need to see possibilities and to see themselves in all possibilities. That’s why the HBO series “Happily Ever After: Fairy Tales for Every Child,” created in the late 1990s, is an important and necessary step in that direction.

And all children need to see difference in children’s texts, not just children of color seeing themselves. There is every reason for me to imagine that children’s texts can reinforce poet Maya Angelou‘s profoundly simple sentiment that in the human family, “we are more alike than we are unalike.” Seeing and talking about difference can underscore commonalities.

What progress have you seen on this front over the years?

The fact we can now find more brown characters in children’s texts, that we can find books about families that look different means that we have made significant progress to create realities that represent our diverse lives.

There is nevertheless work still to be done. For example, even as the HBO series “Happily Ever After” moved to represent different cultural realities in “traditional” fairy tales, the series still privileged in the African American-ist revisions light-complected animated characters over the more darkly-hued characters. The series also fell short by presenting exclusively heterosexual couplings with no nod toward difference in multiple landscapes.

Contrary to what most mirrors of society present, we are not all heterosexual, and neither are our children in our families and in our classrooms. My collection leads off with this provocative and necessary discussion that actually transcends race, gender, and even class. With this lead essay, I hope that readers see that this collection overall is not just about African American children’s literature and not just about children.

What challenges are still out there? How do you suggest we confront them?

Teasing away at layers and layers of complexity that lie beneath the surface is the challenge for parents and students. Children are very complicated and witness complexity even when they may not have the language to articulate their feelings and observations about that complexity.

I hope that my collection provides a space to parse out some of these wonderful textures, nuances, and complexities in ways that satisfy rather than frustrate. Only through open dialogue can we continue to define and sustain progress, again seeing and acknowledging difference not as threat but enhancement of our very human condition.

How about when it comes to African American youth literature more specifically?

My foray into adolescent and youth literature has been more limited as I have only supplemented my children’s literature commentaries and course teaching with a few specific texts—works by Nikki Grimes, Jacqueline Woodson, Christopher Paul Curtis, and even Sapphire.

Congratulations on the publication of Once Upon a Time in a Different World: Issues and Ideas in African American Children’s Literature (Routledge, 2007)! Could you give us an overview of what readers might expect?

I hope that readers will find the essays in the collection provocative, compelling, and relevant. I hope that the range of topics that push the proverbial envelope will be like nothing readers have come across before. I want readers to see the volume as a kind of labor of love that is about me and that is bigger than I am.

The volume is special also because I started writing about children’s texts when my daughter was born. That the volume came out 18 years later just as she graduated from high school and represents my work over these 18 years adds a sentimental note of satisfaction for me.

I also want readers to see that the volume is really on some level about all of us who are responsible for any child’s wellbeing. That’s one of the reasons for the call-and-response format with scholars and others from various backgrounds and with different perspectives participating in a conversation about these many topics. That the contributors aren’t critiquing or even agreeing with my essays is very deliberately intended to give voice to other perspectives than my own. And what some of the contributors brought to the exercise amazed and surprised me in the best possible ways!

I knew there was a need to bring all of what I had done and what I was then doing under one umbrella that was accessible and not just a history lesson, not that there’s anything wrong with a book that’s a history lesson. That’s just not the book I wanted or needed to write.

I’ve also been teaching a children’s course over the past few years and knew that there was a need for such a collection. I don’t know another collection quite like it, especially the range of topics and the formatting, and from the perspective of a parent, a parent of color, a educator, an educator of color, and an educator who engages both children’s and adult texts in one moment.

The spark has always been there since my children were born. And I have been writing for some 18 years on issues that matter to me as a parent of color and that should matter to all parents.

Along with more global analysis, your book includes many personal insights and stories. What made you decide to frame the discussion in this way?

I hearken back to that old mantra that “the personal is always political” for folks of color and for women and that “the political is indeed personal.” So I can’t and don’t find a need to artificially separate these issues as intellectual exercises.

I especially enjoyed those chapters that juxtapose your reviews of YA books with those of your daughter, Jasmine. How did this dual-perspective approach evolve?

My colleague and renowned expert on young adult literature, Jim Blasingame, invited me and Jasmine to write these reviews of then-new novels for his Journal of Adolescent and Adult Literacy. I thought it was an interesting exercise.

Even though I had to bribe Jasmine to write hers and to include enough details, she wrote intelligibly and thoughtfully. I still wish she had included more details, but getting a teen to read and then write anything substantive during the summer was a challenge and an eventual accomplishment. She’s also very perceptive and a good writer to boot. So I was very pleased to have her voice there since we adults are most often talking about and choosing texts without input from the student audiences we are trying to reach. This seemed to make sense to include her in the larger book project. I am glad that I did!

What did other contributors bring to the book?

Other contributors brought the potential for perspectives different from my own. And I chose folks whose personal lives were different from mine and who came from different professions—lawyers, physical assistants, artists, students, communications director, for instance. I think this difference in approaches and perspectives enhances the volume and the impact that it can have for wider and more diverse audiences.

In terms of African American children’s-teen books, when you walk into a classroom, what titles would you especially hope to find? What approach to building the collection?

I hope that some children’s picture books are there alongside such provocative texts as Maya Angelou‘s I Know Why the Caged Bird Sings; Frederick Douglass‘ Narrative of the Life of Frederick Douglass, an American Slave; Zora Neale Hurston‘s Their Eyes Were Watching God. Indeed, these are not typically youth texts but are texts that sophisticated teens can and should handle. I’d also include Sapphire‘s Push.

What guidance do you have for those building children’s-YA collections in schools and public libraries?

Be open to new texts and not committed to recycling the same old “classics.” We can create new “classics.” We can also bring in youths’ perspectives. Have youths conduct book discussions at local libraries. Listen to the voices of those we are trying to reach. Have youths write review columns—books, movies, songs—in local neighborhood newspapers or library columns. Show them that their voices matter and are being heard. Allow youths to help us make decisions about what they want to read, talk about and think about.

What words of encouragement do you have for African American children’s-YA writers?

Be true to yourselves and write honestly and openly. And imagine the world from multiple and diverse perspectives as we try to image books where every child seems him- or herself positively and legitimately.

I run, I see plays, I serve on the Arizona Humanities Council, I chair a very large English department, and I watch “Judge Judy!” I am also co-editing a book on the works of performance artist Sapphire and revising a paper that considers a performance on “Last Comic Standing” as a revision of Helen Bannerman‘s 1899 hugely popular and racially-problematic children’s book Little Black Sambo.