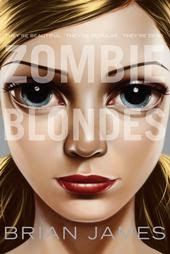 Brian James on Brian James: “I was born in Virginia on January 7, 1976. I never really knew my real father, he and my mother split up when I was one year old.

“My mom was only 19 when I was born, and she raised me and my older brother by herself for the first few years of my life. We moved around a lot, living with family. We moved in with her boyfriend when I was four and stayed there for two years. He was really abusive, and I think that shaped a lot of my impressions at the time. She finally left him and ended up marrying my step-father shortly after.

“My step-father was great, and with him, we more or less lived the suburban life. I ended up with two sisters and two more brothers.

“Being in a big family often meant going unnoticed, which left me a lot of time to figure things out on my own…both good and bad. There were a lot of ups and downs, and things going on that confused me. I guess even as a little kid, I tended to work those out by telling myself stories…which naturally progressed into writing them down.

“In high school, I never took much interest in writing or reading. Not until I was 16 or 17. At that point, I made a new best friend who really turned me on to books and kept giving more and more things to read. I ended up senior year in high school taking mostly English classes and loving it. I moved to New York City with I was 18, and I ended up majoring in English Literature at NYU.

“I never took a creative writing class of any kind, I always assumed I’d learn more about how to write effectively by studying great books and then developing a style without anyone’s help so that it would be unlike anyone else. I also studied psychology, which I found very helpful. Learning why people act the way they do to certain situations gave me a new insight on developing characters.

“Most of my early influences were music. I’ve a been huge fan of music since I was little, and since I didn’t read for pleasure until I was 16 or so, song lyrics were the biggest influence on me at first. Kurt Cobain, Axl Rose, Syd Barrett, when I was starting, and even today Elliot Smith, John Frusciante and others. There are also a lot of authors that influenced my writing, William Burroughs, Irvine Welsh, Lewis Carroll, and John Fante.

“I lived in New York for ten years before moving to the Catskill region in upstate New York two years ago.”

Others would have said I was a freak. I never thought so. But being overtly punk in a suburban town in the early ’90s was a good way to get labeled “freak.” I wasn’t quiet about it either. I lashed out quite a bit. Looking back on it all, I would say I was definitely troubled. In a lot of ways, it’s pretty amazing I survived past the age of eighteen.

I was always interested in writing. But all through high school and college, I only ever shared any of it with a few select friends. I was always too embarrassed to show anyone else.

Because of that experience of really developing my style in isolation, I think I’ve been able a pretty unique way of writing. But it also stunted my editorial skills quite a bit.

Thankfully, I made the smart decision to take an internship in the editorial department of a major publishing house during my senior year of college. There I learned a lot about how writing is shaped into something great. I applied what I learned to my own writing after that.

If I could do it all over again, I think would’ve tried to be more open to other peoples’ suggestions and criticisms earlier on in my development.

As far as character is concerned, I think young protagonists are exciting. There’s opportunity to create emotionally dynamic characters whose actions would be less believable when projected onto an adult character.

As for an audience, I think teens are great for the same reason. They’re really open to understanding different points of view. I also think they respond to a work of fiction on much more personal level sometimes, and as a writer, it’s great to know your work has real meaning to its readers.

It was pretty much a sprint all the way. My first novel was sold when I was 23. I got extremely lucky. Having worked in publishing, I had a few connections that worked out quite well.

Could you please update us on your recent back-list and/or current titles, highlighting as you see fit? 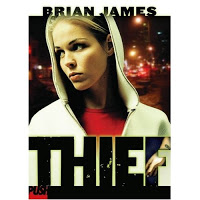 I have another novel that is coming out around the same time. It’s a book called Thief (Scholastic 2008). It’s about a girl in NYC foster care who steals for her guardian. It’s a companion book to a novel I wrote years ago called Tomorrow, Maybe (Scholastic, 2003). It’s the second time I’ve done a companion set, where a character from one book goes on to narrate a later book. It was interesting to revisit a character after such a long break, but it came well.

I also just finished a new manuscript called The Heights, a modern reworking of Wuthering Heights, that should come out next year.

How have you grown as a writer over time? What do you see as your strengths? In what areas do you feel as though you must still push yourself?

I think as an artist, it’s important to keep improving and pushing yourself. My strength has always been voice and making a character feel real.

I’ve always been more excited about language and character more than plot, and, therefore, that’s the area that I always have to work hardest on. I usually rework a plot outline several times before I write a story. Zombie Blondes is really the first book of mine that has plot at the forefront, and it was really fun for me to work on it because of that.

Congratulations on the release of Zombie Blondes (Feiwel & Friends, June 2008)! Could you tell us a bit about it?

Sure. It’s sort of my take on a horror novel. I wanted to write a horror novel that felt extremely real. So the main character Hannah isn’t unlike the characters of my previous books, which would fall into the realistic fiction genre. She’s a girl who moves around a lot and has trouble fitting in wherever she goes. The book deals with a lot of the normal problems of being in high school, but Hannah has the unfortunate luck to happen upon a school attended primarily by zombies who are very clever and devious when it comes to hiding themselves.

The initial inspiration actually came from Jean Feiwel. I’d worked with her in the past, and she had come up with the title Zombie Blondes but without a story. She got in touch and asked if I had any ideas.

I loved the title right away, but at first it seemed so far out of the range of what I normally write. But then the idea stuck around and the story started to take shape in my mind. I envisioned it as a cross between the movies “Heathers” (1989) and “The Lost Boys” (1987).

We started discussing the idea in the summer of 2006, and I wrote the book that fall and winter. There wasn’t much time between then and now, since it was an idea conceived together with the publisher.

The main literary challenge to the book was figuring out how to capture the intensity of the scary scenes. Movies have the luxury of using music and quick camera cuts to shock the audience. I had to figure out a way to do that in a novel.

As for research, I lived most of it. I had recently moved from New York City to a small town in the middle of nowhere (which bears a strong resemblance to the town in the book). So Hannah’s feelings were based heavily on my own.

So, I’m curious… Do you have a particularly intriguing history with zombies? Blondes? Both?

The zombies were based some images I’d been looking out by different artists and the songs of Roky Erickson. There are a couple of hidden nods to him in the book.

The zombies also represent a lot of my personal opinions about our society, and in that sense, I’m sorry to say, we all have experience with zombies.

I would try to focus on smaller themes. I used to set out to write an epic every time I sat down. Because of that, and my lack of experience, I often got lost in the story and let it spiral out of control.

What advice do you have for YA horror novelists?

Remember that sometimes the scariest things are realistic. If you can capture the horror of the everyday moments, then it magnifies the actual horror elements of the story.

I’m music junkie. I have a CD collection numbering in the thousands. So I’m always searching for new finds and listening to library I have.

My new novel, The Heights, which I mentioned earlier. I’ve also started another horror story that focuses on the survivors a plague. And I’ve been kicking around another story idea about a former child star who’s self-destructing in his teen years.

One thought on “Author Interview: Brian James on Zombie Blondes”