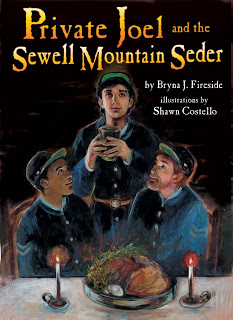 Bryna J. Fireside on Bryna J. Fireside: “I was born in Linden, New Jersey. I learned early in life that if I stayed home when school was out, I’d have to help my mom with the house work. But if I went down to my dad’s dental office, I could do neat things such as answering the phone, making appointments, mixing up the stuff that silver fillings were made of, developing X-rays, and running errands. But a career in dentistry was not what I wanted.

“When I finished college, I taught in elementary schools in Chicago, Baltimore and New York City. I had a great time living in Greenwich Village, where I met and married Harvey, with the terrific last name, which I happily adopted as my own.

“We moved to Ithaca, New York; ten years later where Harvey was a professor at Ithaca College. We have three terrific adult children, five granddaughters and one grandson.”

Would you tell us about your journey as a writer and how it lead you to write Private Joel and the Sewell Mountain Seder, illustrated by Shawn Costello (Kar-Ben, 2008)?

My writer’s apprenticeship started when I was a Girl Scout. I began taking our troop’s news to the local weekly newspaper, and was soon given a paying job to write up both the Girl Scout News and the Boy Scout News. I not only had two bylines (one was a nom de plume for the Boy Scouts). I got paid $3 per column!

Later, when I was in high school, and had dropped the Scout news, I landed a job writing a weekly syndicated column called “The Teenager Looks Around.” It ran in seven weekly newspapers in New Jersey.

In college, I concentrated more on my social life than I did on my writing.

Much later, I took several writing workshops at The New School for Social Research, and began to take my writing seriously. With our move to Ithaca, I wrote articles for teachers’ magazines, and I became the children’s book reviewer for a local weekly newspaper.

While newspaper writing was fun–I love to see my name in print–I really wanted to write books for kids. Getting published wasn’t as easy as writing articles for magazines and newspapers. But I joined the Society of Children’s Book Writers and Illustrators, went to conferences whenever I could, and met other struggling writers, who often became good friends and led the way to my getting published. 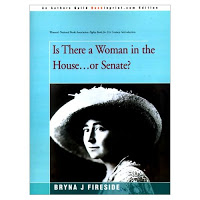 One friend, Joanne E. Bernstein asked me to co-author a book with her. Special Parents, Special Children (Albert Whitman, 1991). It was my first published book. It was quickly followed by Is There a Woman in the House…or Senate? (Albert Whitman, 1993), which was named a “Best Book for the Teenager” by the New York Public Library, and one of the 100 best books for girls by the Women’s Booksellers Association.

Other nonfiction books for Enslow Publishers followed: Young People From Bosnia Talk About War [with Harvey Fireside](1996); Cruzan v. Missouri: The Right to Die Case (1999) The Mary Surratt “Lincoln Assassination” Trial (2001); The Haymarket Square Riot Trial (2002); and The Trial of the Police Officers in the Shooting Death of Amadou Diallo (2004).

In addition, there have been four editions of Choices for the High School Graduate: A Survival Guide for the Information Age (first published by Garrett Park Press, 1996; Ferguson Publishers, Chicago 1999, 2000; Ferguson Publishers/Facts on File, New York 2005. The fifth edition will be published in 2009.

However, my path to the publication of Private Joel and the Sewell Mountain Seder (Kar-Ben, 2008) literally took years. I discovered the original memoir written for “The Jewish Messenger” by J.A. Joel in 1865 on the Web about ten years ago. And, off and on over the years, I dabbled in writing this story for kids, but I never felt that I struck the right note.

Then, in 2005 I read a notice that there was a writers conference at the 92nd Street Y in New York City. It was specifically for Jewish children book writers who were writing Jewish stories for kids. And we were asked to send in the first page of a manuscript we were working on. I signed up immediately. And I whipped out my dusty (can manuscripts get dusty in one’s computer?) manuscript. Suddenly, I began to revise it with new vigor, and when I was satisfied that I was going in the right direction, I sent off my “first page.” However, by the date of the actual conference, I still hadn’t finished writing the story.

Nevertheless, I went to the conference, where I not only met other writers, I also met editors and agents who were truly looking for manuscripts that dealt with Jewish themes.

My particular goal was to write stories for kids that explored the varied Jewish experience in America, from Revolutionary days to the present. I had a particular interest in the Civil War, since I’d written about Mary Surratt. And when I began to research Jews on both sides of the conflict, I discovered some extraordinary stories. And this conference has become an important part of my current writing life.

I was totally surprised when I returned home to find an e-mail from the editor at Kar-Ben Publishing (editor interview) asking me for the complete manuscript of Private Joel!

My excitement was tempered momentarily by the fact that I hadn’t finished the story!

I replied that I’d send the manuscript within two weeks.

Well, that got my heart pumping and my fingers tapping on the computer keys. And by George! I finished the story and sent it off. Within two months, I had a contract in hand.

And after some revisions by me, and great editing and support by the editors, the manuscript was sent to Shawn Costello, who made my story come to life with her amazing paintings that draw the reader right into the experience of these Union soldiers who were determined to celebrate Passover during the war to preserve the Union, and to end slavery in America.

So, the timeline from beginning to end actually stretched over many years. But the major events were my desire to write about the Jewish American experience that has been ignored, or not well known, the discovery of Private Joel’s description of that unusual and amusing and finally, deeply spiritual story during this particular war.

And I am very fortunate to have had not only terrific editorial advice, but also Shawn Costello’s beautiful paintings. Her colors are so well chosen, and the images are soft and impressionistic, and we know that these soldiers are really young boys who had spent time fighting the Rebels, and now, were not only bored, because the Rebels had holed up in the mountains for the winter, but the guys were also lonely and missed their families.

What would you say to aspiring writers?

My advice to any beginning writer:

1. Find time every day to sit down and write, even if all you do is one page. The great thing about writing is that it is not age related—and you get better at it the more you write.

2. Take writing workshops at your local college or community college wherever you are.

3. Go to writers conferences, and gather your courage and talk to people. Jane Yolen once gave me an important piece of advice: “It doesn’t matter that you are not published. What matters is that you are writing.”

4. Write what you are passionate about.

5. Keep your mind active—take courses in subjects you don’t know anything about–you just may develop a passion in history, science, art, theater, whatever.

7. Be familiar with what publishers are actually publishing.

When I’m not writing, I am involved in helping immigrants and refugees in our community through an organization started by my husband and me called The Eleanor Roosevelt No Interest Loan Fund. When my husband died this past February, the fund was renamed the Harvey Fireside Loan Fund. It makes no-interest loans to immigrants and refugees who need money for such things as an unexpected medical bill, or to reunite family members, or apply for a green card, make a deposit on a new apartment, etc.

I’m also involved in the Border Fund, which raises funds for refugee shelters along with U.S.-Mexican Border. I take very seriously that Jewish command of Tikkun Olam—repairing the world. I try to keep it simple and local.

What’s coming up next for your readers?

My next book will be the 5th edition of Choices for the High School Graduate and will have many new interviews with kids who got off the straight and narrow path and struck out on their own…and survived! But I’m also working on another Civil War story, this time an amazing heroine of the Confederacy.