Enter to win a copy of 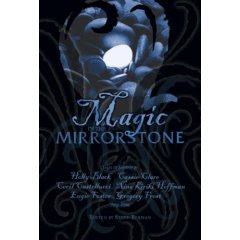 Magic in the Mirrorstone edited by Steve Berman (Mirrorstone, 2008)! To enter, email me with your name and snail/street mail address by 10 p.m. CST April 14! Please type “Magic in the Mirrorstone” in the subject line. Note: one copy will be awarded to any Cynsations YA reader! From the promotional copy: “In this anthology for teen readers, fifteen best-selling and acclaimed fantasy authors weave all-new stories filled with magic. Comic and dark, epic and entertaining, these stories introduce new voices of Mirrorstone beside the treasured favorites of YA fantasy. Holly Black (New York Times best-selling author of Tithe, Valiant, Ironside and The Spiderwick Chronicles)(author interview), Cassandra Clare (New York Times best-selling author of City of Bones)(author interview), Cecil Castellucci (acclaimed author of Boy Proof and Beige)(author interview), Tiffany Trent (acclaimed author of Hallowmere)(author interview), and many more offer tales as varied as they are bewitching. A voodoo princess, a necromancer, and a wizard’s apprentice mingle with enchanted jewelry, talking amphibians, and an aloof unicorn. What binds these stories is the spell they cast over readers.” Note: “Includes a ‘lost’ story of Hallowmere by Tiffany Trent!” Read a Cynsations interview with Steve.

Reminder: Enter to win a copy of By Venom’s Sweet Sting (Mirrorstone, 2007). To enter, email me with your name and snail/street mail address by 10 p.m. CST April 30! Please also type “By Venom’s Sweet Sting” in the subject line. Note: one copy will be awarded to any Cynsations YA reader, and one copy will be awarded to a member of Tantalize Fans Unite! at MySpace. Please identify yourself accordingly as part of your entry! Don’t miss the latest Hallowmere book, latest Hallowmere novel, Between Golden Jaws by Tiffany Trent (Mirrorstone, 2008)(sample chapter)! Read a Cynsations interview with Tiffany.

“Voice, Voice, Voice…Whatever Happened to Authenticity?” the kick-off post of this week’s discussion series by Stephanie Greene at Through the Tollbooth. Here’s a sneak peek: “I asked two editors, Sarah Shumway from Penguin Putnam, and Martha Mihalick from Greenwillow, what they thought about authenticity, and whether it was the same as, or different than, voice.” Note: “Why We Write What We Write” is especially insightful.

Interview: Teri Brown from Little Willow at Slayground. Here’s a sneak peek: “I wanted Read My Lips to be a larger story that happened to star a deaf girl. I wanted it to be fun. I don’t feel qualified to write a deaf issues book, so I kept it light on purpose.”

On Writer’s Process: Jo Knowles from Wordswimmer. Here’s a sneak peek: “I would have to say lack of confidence, most certainly. You know, the Internet makes it possible to see what everyone has ever said publicly about your books. That can be wonderful, and it can also be incredibly painful.”

Verla Kay’s Website for Children’s Writers and Illustrators: one of the Web’s top spots for information and support. Don’t miss the artist and writer pages or forum. Read a Cynsations interview with Verla. 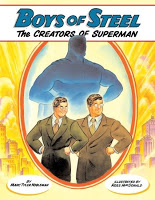 Orphaned Manuscripts by Darcy Pattison from Darcy Pattison’s Revision Notes. Here’s a sneak peek: “The question is this: What happens to your manuscript/book when the acquiring editor leaves?” Note: not a new post but too-often timely. Read a Cynsations interview with Darcy.

“Big Bad Wolf” by Colleen Mondor at Chasing Ray. Here’s a sneak peek: “We have created a myth and allowed it to flourish for our own amusement and it is wolves who pay the price, simply because they are wolves.”

Thanks, Shel Silverstein by Don Tate at Devas T Rants and Raves. Don says in part: “My brothers and I have, at times, treated our mom like the boy in the story treated the tree. But were mature now and give back. At least we try. But I’ll have to try even harder.” Note: this generally book falls into the love-it-or-hate-it category, generating strong feeling on both sides. Thanks to Don for helping me to consider it in a more favorable light.

Writing the Second Chapter by Jo Whittemore. Here’s a sneak peek: “This is the chapter I often spend the most time on, simply because it tends to be the most boring–full of backfill and character descriptions and transitional dialogue to tone down the dynamic opening.” Read a Cynsations interview with Jo.

On a related note, our friends at the Brown Bookshelf are asking enthusiasts of African American youth literature to write in to Essense magazine with our favorite titles! Here’s a sneak peek: “Here’s your chance to let the book editor of an African American lifestyle media mainstay know what you–librarians, teachers, parents and other influencers–are reading or recommending to young readers of color.” Read a Cynsations interview with the founders of the Brown Bookshelf.

Question of the Week Thursday: Robin Friedman asks John Green: “How has your life changed since winning the Printz award?” Read Cynsations interviews with Robin and John.

Making Your Conference a Success from BookEnds, LLC. Here’s a sneak peek: “I’ve learned from an agent’s perspective what works and what doesn’t. So here it is. My list of those things I’ve seen and those things I can recommend.” See also Calling All Conference Organizers from Agent Kristin at Pub Rants.

Congratulations to Candice Ransom on the release of Gold in the Hills: A Tale of the Klondike Gold Rush from the Time Spies series (Mirrorstone, 2008)! Listen [to the podcast] as MadDrJeffe interviews author Candice Ransom and editor Stacy Whitman of Mirrorstone Books as they discuss…Time Spies at the American Librarian Association’s convention. Read a letter from Candice about her inspiration for the series. Here’s a sneak peek: “…I am living in the wrong century. Once, when I was ten years old, I wandered around an old country cemetery. As I read the tombstones, I wished I lived in long-ago days.” See also Cynsations interviews with Candice. and Stacy.

By Steve Brown from the Dallas Morning News: “Plano [Tx]’s Shops at Legacy complex will soon have one of the largest independent bookstores built in the U.S. in years. The 24,000-square-foot bookseller plans to open in late summer near the northeast corner of the Dallas North Tollway and Legacy Drive, occupying a three-level store in the newest section of the Shops at Legacy.” Read the whole article. Source: Writers’ League of Texas.

Between April 13 and May 3, book donations for Cedar Park (TX) Public Library at Borders Express at Lakeline will be in memory of children’s services librarian Marian McTrusty. Read more about Marian from Cynsations.

See Me, Hear Me: Skype in the Classroom: Chat with authors, record podcasts, and cover reference—all online and for free—with Skype by Carolyn Foote from School Library Journal, January 2008. Here’s a sneak peek: “Through Skype, my students at Westlake High School in Austin, TX, were able to ‘visit’ with Cynthia Leitich Smith, award-winning YA author of Rain Is Not My Indian Name (HarperCollins, 2001) and Tantalize (Candlewick, 2007). Smith, who is based in Texas, believes that events like these ‘reinforce the idea that books and technology don’t have to compete. They can be celebrated together,’ she says.”

Huge cheers to executive producer Dan Musselman, producer-director Tony Hudz, actress Kim Mai Guest, and everyone at Listening Library/Random House on their fantastic audio production of Tantalize (Listening Library, 2008)! Note: I’ve been listening to the audio book, and I’m wowed by Kim’s distinct characters, her ability to project emotion, suspense, and humor, and the overall effort. The voices of Ruby and Nathaniel are particularly perfect! Thank you all. Note: listen to an excerpt of the audio book.

Jamie has created a new fan trailer for Tantalize!

And finally, it’s my pleasure to congratulate the University of Kansas Jayhawks (men’s basketball team) on its NCAA National Championship! I’m a 1990 graduate of the William Allen White School of Journalism and Mass Communications with majors in news/editor and public relations. Rock Chalk!