Stephen Roxburgh on Stephen Roxburgh: “I was born in Boston (Quincy, really) in the middle of the twentieth century (1950) and grew up in a small town on Narragansett Bay. I started school early (age two) and stayed late (twenty-seven) with only a few recesses.”

Were you an avid young reader, or did you come to this love later in life?

I have no recollection of not being a reader. What I remember most about my early life is the time I spent reading.

What inspired you to enter the field of children’s and young adult publishing?

Could you summarize your career to date?

Manic obsessive. I entered publishing in children’s books at Farrar, Straus & Giroux in 1978. I left FSG to found Front Street in 1994. Front Street and Boyds Mills Press joined forces in 2004.

What prompted you to found Front Street?

It was time to move on, and I didn’t see myself working for a large publicly-held corporation (not that one would have wanted me). I knew that if I didn’t start my own company then, I never would. I founded Front Street, deliberately, on April 1, 1994. Fools walk in where angels fear to tread.

What challenges and opportunities did you encounter at the head this new company?

Everything was a challenge: founding a tiny independent publishing house was a lunatic scheme. Everything was an opportunity: there were no guidelines that were relevant, no rules I needed to follow, no standard procedures.

How would you describe the list today? What sorts of books do you publish?

The same answer to both questions: Best of kind.

If you had to highlight three recent titles that would give us a feel for the list, which would you choose and why?

Prior to joining with Boyds Mills Press, we published a little bit of everything at Front Street, although we were best known for our young adult fiction. Subsequently, we have decided to focus our imprints based on content and Front Street has become our fiction list.

Recent titles include Keturah and Lord Death by Martine Leavitt (a 2007 National Book Award finalist). Martine is an extraordinary writer who I met when she was working toward an MFA in Writing for Children and Young Adults at Vermont College. My wife, the novelist Carolyn Coman was on the Vermont faculty at that time and introduced us. I had the opportunity to read Martine’s work in progress, a novel entitled Heck, Superhero (2004), which I eventually published.

What Happened by Peter Johnson is a first novel by a well-established prose poet. I love publishing first novels, and we always have one or two on our list. This novel is a nontraditional narrative told from the point of view of a highly idiosyncratic and, I should add, unreliable narrator, about whom the reader comes to care a great deal. 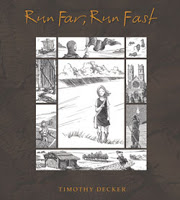 A book we’ve just published that looks like a picture book but is graphic fiction is entitled Run Far, Run Fast by Timothy Decker, an extraordinary pictoral story about a girl wandering the countryside during the Black Plague in fourteenth-century Europe. The book defies categorizing and is one of the most remarkable books I’ve ever published.

Which would you recommend to writers for study and why?

You became an associate publisher at Boyds Mills in 2004. What prompted this development?

When Kent Brown, then publisher and founder of Boyds Mills Press, and I agreed to join forces, the plan was that I would immediately take charge of the editorial side of the company and eventually take over as publisher as part of a transition plan that would enable him to focus his efforts on the Highlights Foundation of which he is the executive director. I assumed the position of publisher of Boyds Mills Press in February of this year.

Could you give us an overview of Boyds Mills in terms of its history and objectives?

Boyds Mills Press was founded in 1990 by Kent Brown, Clay Winters, and Larry Rosler. The company is the trade-book division of the Highlights for Children, Inc. The goal of the company is to publish books in keeping with the corporation’s mission and values.

How would you describe its list? What distinguishes it from other children’s book publishers?

Our list is a general trade list with a strong commitment to the library market, to our backlist, and to keeping our titles in print.

Who are the big names, rising stars, and hot new voices?

As far as I am concerned, all our authors and artists are big names, rising stars, and strong voices. This may be what most distinguishes us from other children’s book publishers.

What do you see as your jobs in the publishing process?

My job is to make sure that we publish authors, not books. Our goal is to publish a few good books well. “Well” means that we and our authors and artists are proud of what we do and that we are profitable enough to keep doing it. Our books need to be best of kind. We need to maintain our commitment to our underlying vision and values over time.

What are your challenges?

We are a small company with finite resources in a world of large companies with seemingly infinite resources. We need to pay attention, be nimble, and be quick.

Everything. I am never, ever bored.

How has publishing changed–for better and worse–since you entered the field?

It hasn’t, at least not essentially. I have gotten older.

What global improvements would you like to see and why?

Clean air, clean water, less violence, universal education and health care. These would be an improvement over what we have now.

What qualities do you look for in a manuscript?

In each case (Front Street and Boyds Mills), how can writers/illustrators submit their work for consideration?

Any way they want. The door is open.

Any submission recommendations or pet peeves?

Save paper and postage whenever you can.

Like I said, I married her but she can’t draw worth a fig.

Do most of your books begin as submissions from writers, writer-illustrators, or agents? Why?

Looking back on your career to date, which of the books you’ve worked on stand out most in your memory and why?

The ones that stand out most in my memory are far too painful to discuss in a public forum. What’s more important is which of the books I’ve worked on stand out in a young reader’s mind. I suspect I won’t ever know which those are.

What do you do outside the world of children’s and young adult books?