Sylvia Vardell on Sylvia Vardell: “I am currently Professor at Texas Woman’s University in the School of Library and Information Studies, where I teach graduate courses in children’s and young adult literature. I received my Ph.D. from the University of Minnesota in 1983, and have taught at universities in Texas, Nevada, Maine, and Washington. I taught at the University of Zimbabwe in Africa as a Fulbright scholar in 1989. I am married, with two children (ages 19 and 23), and I am a naturalized American citizen (born in Australia, of German parents).”

Congratulations on the release of Poetry Aloud Here! Sharing Poetry with Children (American Library Association, 2006). Could you tell us more about the book?

This book is intended to be very practical, with strategies for sharing poetry with children ages 5 to 12 in ways that are fun and participatory. There are six chapters, and they focus on introducing major poets writing for kids, different forms and formats of poetry for young people, poetry awards, poetry promotion activities, and on how to guide children’s responses to poetry.

For anyone who wants to dip into poetry for children for the first time or to plan Poetry Month activities, I hope they’ll find plenty of helpful ideas here. I’m proud to quote the Booklist review, “Loving work has gone into making this gem of a book, which should be required reading for all children’s librarians.”

I had the opportunity to develop a course for teachers and librarians focused only on the area of poetry for children. What fun! And although there were a few professional books about reading poetry and about writing poetry with kids, I couldn’t really find anything current about sharing poetry orally, about exploring and celebrating the sound and music of poetry for children. But the more I tried poetry activities with kids, and the more I taught my poetry class to grown ups, the more I was convinced that this was needed.

This catapulted me into a more active role in the American Library Association where I encountered a “call for manuscripts” from the ALSC (Association of Library Service to Children). I submitted a proposal in the fall of 2004, the ALSC committee approved it in January, 2005, I submitted the manuscript in September, 2005, and it was published by ALA in the spring of 2006. Voila!

Of course the biggest challenge was finding the time to write while teaching my regular load of courses and maintaining other professor responsibilities (committees and whatnot) and a tiny bit of real life, too. Complete isolation works best for me, so when I needed a jump-start or hit a rough patch, I rented an inexpensive hotel room for a few days. (My family was great about that!) Probably my biggest worry was whether I could write for the “library market,” and I was so relieved when my editor read the first, sample chapter and loved it.

If you could suggest a couple of key poetry books at each age-range level for study, what would they be?

It’s hard to choose just a handful. My own list of favorite poetry books for kids is 30 pages long! I wrote a piece for Book Links last year that noted 15 classics of children’s poetry in honor of the magazine’s 15th anniversary. And here are a few gems that are not-to-be missed. 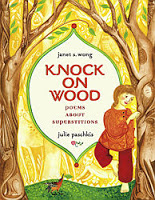 J. Patrick Lewis. Please Bury Me In The Library (Harcourt, 2005)

Eloise Greenfield. Honey, I Love and Other Love Poems (HarperCollins, 1978)

Mary Ann Hoberman. The Llama Who Had No Pajama (Harcourt, 1998)

Karla Kuskin. Moon, Have You Met My Mother? The Collected Poems of Karla Kuskin (HarperCollins, 2003)

Langston Hughes. The Dreamkeeper and Other Poems (Knopf, Reissued 1994)

Naomi Shihab Nye. A Maze Me: Poems for Girls (Greenwillow, 2005)

Marilyn Singer. How to Cross a Pond: Poems about Water (Knopf, 2003)

Joyce Sidman. The World According to Dog: Poems and Teen Voices (Houghton Mifflin, 2003)

So far, what are your favorite poetry children’s books of 2007?

I haven’t seen everything yet, but these are some that have really impressed me:

Stephanie Hemphill. Your Own, Sylvia (Knopf, 2007)

How has the field evolved in recent years?

Just ten years ago the Academy of American Poets initiated the observance of National Poetry Month to celebrate poetry and its place in American culture. Since then, poetry has continued to gain momentum with the emergence of Young People’s Poetry Week in 1999 sponsored by the Children’s Book Council, a focus on poetry slams as the centerpiece for Teen Read Week in 2003 sponsored by the American Library Association, and the inauguration of the Poetry Blast in 2004, a concert of children’s poets held at the annual conference of ALA.

I enjoyed the ALSC blast so much that I brought the idea to TLA (the Texas Library Association) and we’ll be hosting our fourth annual “Poetry Round Up” at the TLA conference next spring with poets, John Frank, Charles Ghigna, Juanita Havill, Alan Katz, Linda Sue Park (as a poet!)(interview), Adam Rex, Tracie Vaughn Zimmer (author interview).

What trends have you noticed?

Picture book collections of poetry have been around a long time, but the illustrations in this format are continuing to evolve, with double-page spread art becoming the norm with the poems superimposed on the images, rather than with drawings supplementing the verses. Now we have to be careful that the art doesn’t overwhelm or derail the poetry!

For young adults, the verse novel or the novel-in-verse, as it’s sometimes called, has emerged as extremely popular. I’m also glad to see some older poetry for all ages being reissued in new (often richly illustrated) formats, such as that of Myra Cohn Livingston, Gwendolyn Brooks, and Langston Hughes.

What other academic/critical resources do you recommend?

To be absolutely shameless, I have published another book in the area of children’s poetry just this summer. It’s entitled Poetry People: A Practical Guide to Children’s Poets (Libraries Unlimited, 2007), and it’s another practical resource—this time providing one entry for each of 60+ children’s poets, with biographical information as well as ideas for using each poet’s work with kids.

I also recommend Three Voices: An Invitation to Poetry Across the Curriculum (Stenhouse, 1995) by Bea Cullinan, Marilyn Scala and Virginia Schroder; The Poetry Break: An Annotated Anthology with Ideas for Introducing Children to Poetry (H W Wilson, 1995) by Caroline Feller Bauer, and Pass the Poetry Please (HarperCollins, 1986) by Lee Bennett Hopkins (HarperTrophy, 1998).

There are also several excellent resource books written by the poets themselves, including Georgia Heard, Sara Holbrook, Ralph Fletcher, and Myra Cohn Livingston, for example.

There are also a number of excellent Web sites related to poetry (for adults and for young people) that I find so interesting and helpful, including: The Academy of American Poets; Favorite Poem Project; Poetry 180; Poetry Hill Poetry; Giggle Poetry; Children’s Book Council Young People’s Poetry Week.

In July 2006, you launched a blog, Poetry for Children! What prompted you to enter the blogosphere?

I enjoy the lively immediacy of blogs and blog postings, particularly those in the kidlitosphere. But I didn’t see any that were devoted particularly to kids’ poetry, so I thought that might be a niche I could fill. I try to post weekly with poems and background information (lots of lists of poetry books by theme or topic) that link with an event or happening of the day. In April (National Poetry Month), I posted daily—that was a challenge!

I like the discipline of it—-it pushes me to write about poetry, in particular, on a regular basis. I also like being connected with the rest of the kidlitosphere, especially on “Poetry Fridays.”

What are the challenges?

I’m worried that I’ll start repeating myself, but I check my previous postings all the time to guard against redundancy and so far, so good. I’m also learning how to reach an ever widening audience through feeds, links, and whatnot.

What’s next up for you?

I’m writing a regular column for Book Links magazine called “Everyday Poetry,” which showcases fast and easy ways to integrate children’s poetry into daily practice. I plan to keep rolling with poetry and am working on a massive “poetry calendar” project, finding poems for children for every day of the year hooked to some special or historic event each day. That’s been quite an ambitious undertaking and I’m nearly finished.