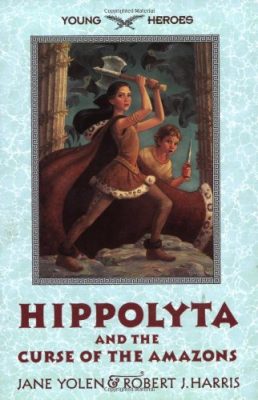 Jane: As this was the second book in the Young Heroes series, (novels about the adolescence of Greek Mythic heroes) the initial inspiration was to find a female hero and give her as much adventure and as many hairbreadth escapes as we had given ODYSSEUS in the first book.

We had a lot of discussion about what kind of adventures she should have and the story arc. As the mythic Hippolyta had been a queen of the Amazons, we knew she would be a princess as a teenager. We thought that something to do with an unwanted baby brother would be an interesting plot opener. After that, our ideas raced away on divergent tracks. Bob wanted one thing and I another. Solving THAT was our first major hurdle.

Bob: We wanted to make this book different from our first Young Heroes novel.

One of the crucial differences is that Odysseus is carried along by events. He is knocked overboard, picked up by pirates, washed ashore etc. Hippolyta, however, is always driven on by a strong sense of purpose, firstly in her journey to Troy, then in her search for Arimaspa.

Jane: Once we solved out first plot problem, the rest of the book went along swimmingly, or at least as far I remember. Of course, Bob is the plotter and I am the scene and dialogue coach, so I may be misremembering! But the book, being under contract, then had a major major revision (the letter from the editor was many pages long and single spaced.)

Bob: Once we had combined our different plot ideas into one strong story, the plot unfolded in a very natural way. Much of the final rewrite involved clarifying our notions of the origins of the Amazons and the role played by the gods in that tale.

What were the challenges (literary, research, psychological, logistical) in bringing the book to life?

Jane: Very little is written about the so-called Amazons and even less about Hippolyta, so in some ways that gave us great scope to make a lot up. But we still wanted to keep it set in a real ancient world. Not like Xena and Hercules on TV where the writers mix and match stone/iron/bronze age with great abandon. So we read archeological texts as well as ancient history texts, books about ancient clothing and food and the like.

Bob: We try to treat these stories as something that might really have happened (apart from the gods and monsters, of course). In Hippolyta we used the Scythians, a historical people, as our model for the Amazons.

Though we try to be faithful to the Greek mythology as well, we diverged in the case of Ares, the god of war. The Greeks regarded him as an arrogant bully, and that is how he has been portrayed right up until today. We decided to take a different approach and have him represent the courage and self-sacrifice of the soldier defending his country and his family.