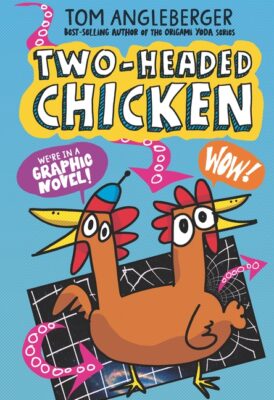 Congratulations to Tom Angleberger on the publication of his new graphic novel, Two-Headed Chicken (Candlewick, Sept. 6, 2022).

Take a look back at his reflection on Children’s Literature as a Team Sport. It first appeared on Cynsations in February 2020. 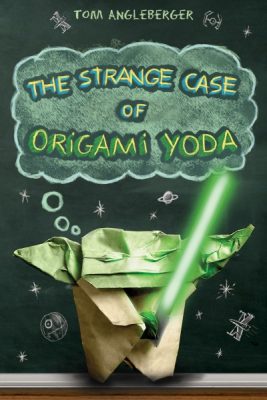 Have I learned anything? Gained any wisdom? Can I impart one piece of advice that I’ve learned?

Yes, actually, I have learned one thing. I think it’s pretty wise. And here it is if you want it: “This is a team sport not a solo show.”

When you get published, you’re joining more than one team.

Here’s the thing. None of these teams are opposing teams – or at least they shouldn’t be. A victory by any of these teams doesn’t mean a loss for anyone else.

If our goal is to get a good book to a kid reader, then every time we get a goal, we are setting up for the next one. Because the kid will finish that book and reach for another. Maybe it’s your book…and maybe it’s not.

I’ve been thinking about all this teamwork recently, because I am joining a new team. We had a video conference call and here were these two awesome people telling me about this awesome thing we could all make.

And the reason I was getting that opportunity is that someone on a different team had schlepped one of my books all the way to the Bologna Book Fair where it got noticed. And, of course, it wouldn’t have been noticed if not for the amazing artwork from the illustrator. Not to mention the cover design, the lettering, the printing and on and on. So many teammates had put in all this work to help me get on base.

And this has happened over and over to me in the last ten years.

I drew a graphic novel that’s coming out soon that looks amazingly like a real graphic novel. But I know that what I turned in is just a bunch of line drawings of questionable quality.

It took a whole team of talented people to turn it into a real graphic novel. And the other day a cardboard box was delivered with the result. Now other teammates will get to work to put the book out there in the world.

Maybe a kid will grab it. Maybe they won’t. But that possibility will only exist because of our team.

It’s incredible and it’s humbling to think of how little of this I could do by myself. (In fact, I tried and failed at self-publishing long ago.) So, the team is everything…yet I have no idea who might be on my team tomorrow.

So, an easy takeaway from all this is that you shouldn’t go around booing.

It’s sometimes necessary to call out people who are really working against the team. But if you just read a hot new book and didn’t like it…Twitter doesn’t need no know. Not only are you booing when your own team gets a goal, but you may be making an enemy of someone that might have helped you tomorrow.

A deeper meaning to my advice to is to appreciate what your teammates are doing for you. It may go far beyond what you can see right in front of you. It might be happening right now in a booth in a convention center somewhere where someone is trying to get your book to balance on a little plastic stand next to a hundred other books on little plastic stands. And you may never hear about it or it may change your life.

So pay attention to what’s being done for you and appreciate it and make sure you show that appreciation, too!

But the deepest meaning of my advice – and the part that actually requires some real work – is that being a true team player sometimes means passing the ball or even sitting on the bench and cheering. If your real goal is to get kids reading good books, then everything you do to boost up or assist anybody on the team gets us all closer to the goal.

I’d like to think I do a little of this here and there, but for a true example of this attitude, just look at the creator of this site. Cynthia has cheered so many of us on, helped so many of us out. That’s why I dedicated a book to her.

Hmmm, so maybe my “wisdom” is really just a restatement of Yoda’s wisdom that I’ve known all along: “The Force binds us all together.”

Well, now I’ve mixed my metaphors, which just goes to show you that I have a lot of other things to learn about being an author! But, I’m pretty sure about this team thing.