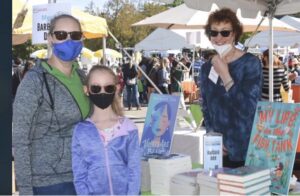 If you write middle grade fiction, chances are good that at some point someone will ask: “Do you ever plan to write for grownups?”

It’s a question that always irks. I think what’s behind it is the assumption that writing for grownups is something to aspire to, because it’s harder than writing for kids.

But here’s the thing. I’m a grownup, and I talk and write like one all day—when I’m sending business emails. When I’m interacting with teachers and librarians. Even when I’m writing blog posts like this one.

What’s truly challenging for a grownup writer is not writing like a grownup. If you’re writing a middle grade novel—even if you’re writing in the third person—the goal is to write with a kid’s sensibility, feeling what a kid feels, perceiving and misperceiving the world in a way that’s authentically kidlike. So, for example, if you’re writing a middle grade novel full of long passages about weather or architecture or the landscape, you’ll lose readers fast, because kids simply don’t care about that stuff.

For me, sensibility is inextricable from voice. I remember how, when my daughter was eight or nine, she was addicted to a popular series. One day she announced she wouldn’t read it anymore. When I asked why not, she said, “Because the characters never use contractions. Kids don’t talk like that.” Even a reader on the younger end of the middle grade range can hear when a writer hasn’t channeled that sensibility. It needs to be present in every word.

So, as much as possible, it’s crucial to listen to actual kids. I start by focusing on their speech rhythms. Even if you ignore the words, you can hear that kids’ speech—their intonations, the length of their sentences, etc.—varies depending on whom they’re talking to. Middle schoolers may banter with friends, squabble with siblings, become reticent with teachers, argue with parents. They may also have a different “sound” when they’re thinking, or talking to themselves. All these speech patterns make different kinds of music. 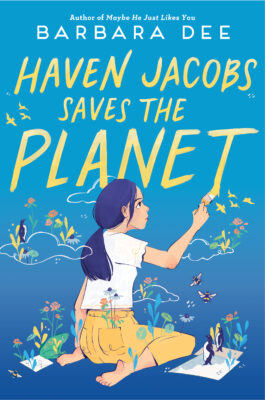 Once I can hear that music, I focus on the words. The biggest challenge in writing middle grade fiction is that you can’t access your full adult vocabulary. Middle schoolers often don’t have the words for their complex emotions—so I let them struggle with inarticulateness. In my newest middle grade novel, Haven Jacobs Saves The Planet (Aladdin, 2022), the seventh grade protagonist thinks about a new classmate she may have a crush on:

There was just something about him, and it wasn’t only the cuteness or the way he stuck up for chemicals. Although the truth was that both those things—the cuteness and the chemicals—made me feel squirmy in a way I couldn’t explain.

Sometimes when Haven struggles with words, she simply invents new ones– like “unbouncy,” “non-school,” “eye-conversation” and “enemyships.” Sometimes she borrows words from tech—“my imagination crashed,” “it was at the top of my mental playlist, and I couldn’t scroll past it. Or delete it. Or reboot.” Sometimes she relies on qualifiers like “really,” “incredibly,” and “basically.” I think this kind of verbal improvisation helps to make her character vivid and relatable, and to capture her anxiety as she tries to control her uncontrollable world. (Side note: even though kids adore slang, I avoid it, because slang words and expressions often become passé between first draft and pub date.)

Because Haven Jacobs is about a kid’s anxiety about the planet, I had to use a certain amount of scientific terminology. But I knew I couldn’t just have Haven reciting facts about climate change, so I converted these facts into random soundbites she internalizes as she doomscrolls on her computer late at night.

I also gave Haven’s teachers and parents the scientific and cognitive vocabulary she lacks. Whenever I’m writing a middle grade novel, I try to create different “levels” of voice—so grownups sound like grownups, and kids sound like kids. Of course, all grownups don’t sound alike, so teachers and scientists need to sound different from parents. Likewise, older siblings need to sound different from younger ones.

Each of these supporting characters needs distinctive speech rhythms as well as verbal tics or favorite expressions.

How can you tell when you’re getting these voices right? One simple trick is to read your writing out loud. If it all sounds too grown-up, or too homogeneous, you’ll hear it. Always trust your ears. 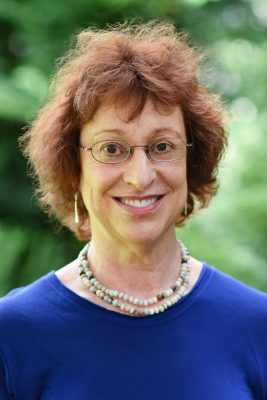 Barbara lives with her family, including a naughty cat named Luna and a sweet rescue hound named Ripley, in Westchester County, New York.