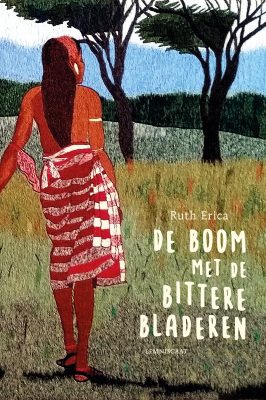 Today I’m pleased to introduce Cynsations readers to Ruth Erica, whose young adult novel De boom met de bittere bladeren (The Tree with Bitter Leaves) has been published in Dutch in the Netherlands and Belgium by Lemniscaat. The novel explores the experience of growing up in the aftermath of the Rwandan genocide through the eyes of a teenaged protagonist who was a small child when the events took place. The novel is on the longlist for the Thea Beckman Prize, which is the prize in the Netherlands for the best historical children’s book (12 years and above).

We talked about what drew her to write this story, and how research, interviews and feedback informed the process of writing a story outside her own lived experience. Welcome Ruth!

You have had a lifelong interest in Africa. Can you tell us more about that and about your involvement with Africa through your work as a cultural anthropologist? 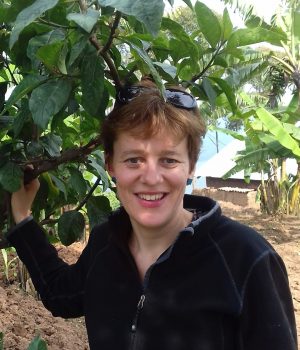 Since I was a kid, I was fascinated by faraway places and cultures. The study of Cultural Anthropology arose from this interest. I specialized in Africa and did my master research in Senegal. That was the first time I visited Africa. I lived with a Senegalese family in a village for three months. They gave me a local name and made a cabin available for me in their yard.

Walking around in the village, trying to understand the people, what they were talking about, what they thought about: it felt unreal. I clearly lacked a frame of reference for this part of the world.

What you learn as a cultural anthropologist, is so called ‘participating observation.’ You participate in life, and observe it at the same time. As a result, you are both an outsider and—to a certain extent—an insider. This skill turned out to be important when writing The Tree with Bitter Leaves (Lemniscaat, 2020).

But I didn’t start writing this novel until fifteen years later. In between I travelled to Africa many times. To the west on my own initiative, to the east, center and south for my work with (international) non-governmental organizations. I had the privilege of staying with local people often. I learned a lot that way.

How did your interest in writing about Rwanda come about?

In this tiny central African country, I met people with whom I developed a special friendship. This friendship continued over time. As a result, I had a unique entry point into the country. I got involved with the residents and listened to their stories. This friendship was also the reason I kept coming back.

Can you tell us more about how you got the idea for this book?

My entry point into Rwanda was friendship. Of course, I knew there had been a genocide in 1994, but during my first visits I didn’t dig into this. I didn’t even visit the memorials. I stayed with my friends and shared their lives. They were talking about food, income, education, health, family. There were funny things and things to marvel at.

But as I learned more about Rwandan society, I also started to wonder. One day, a mother told me a story about her seven-year-old daughter. The girl had heard the word ‘genocide’ on television. When she asked her boyaise (a paid-caregiver) what that meant, the boyaise bluntly told her the truth. That evening in bed the girl sobbed: “Mum, you can’t kill people, can you?”

Her mother was shocked. She didn’t want her daughter to learn about the genocide this way. Understandable. But then, how do you tell your children about such a traumatic event? Incidents like this made me wonder what it would be like to grow up in a post-genocide society.

So I didn’t turn my attention to the genocide, the subject came to me. It seemed to me it was hidden beneath the surface and could emerge unexpectedly. The Tree with Bitter Leaves is therefore not set during the Rwandan genocide, but fourteen years after. It is about how young people struggle with the legacy of this period.

This is an important story to tell, and your passion for it is clear. How did you approach writing a book that is outside your own lived experience?

I approached this topic the same way it approached me: indirectly. In The Tree with Bitter Leaves, the genocide is nowhere in your face. But while the story unfolds, it surfaces in whispers, private conversations, flash backs, nightmares, a documentary, the Rwandan tribunals.

In addition to my visits to Rwanda, I approached the subject from many different angles. I read all kinds of books and articles, watched films and videos, attended meetings. The Rwandan tribunals—which were set up to judge the perpetrators—were so complicated that I consulted an expert who gave his feedback on how this topic was handled in the manuscript.

Finally, I approached cultural readers: Rwandans who were willing to provide feedback on the manuscript. I found them both in the Netherlands and in Rwanda. For the last, I had to translate the manuscript orally sentence by sentence into French. Labor intensive, but extremely valuable.

What was your process for getting feedback on your book as you went through the writing and publication process?

When I had the idea of writing this book, I went to Rwanda. I had written a storyline, and presented it to my friends. Most of them were unfamiliar with fiction. “So you made up the story and the characters too?” they said in amazement. Once they understood, I went through the storyline with them. They gave their input as well as their approval for the project.

Back in the Netherlands, I wrote the first draft of the manuscript. But apart from the writing technique, many questions arose about the Rwandan context. What does the protagonist know about the genocide, for example? How would she approach things in her culture? How do people respond? I had to check this through all the sources I just listed: the books, films, meetings, sensitivity readers. I adapted my views – and thus the manuscript – over and over again.

Once satisfied, I sent the manuscript out to a number of publishers. I was lucky: four of them were interested. Amongst them was my favorite one Lemniscaat. Lemniscaat presented me with a list of questions on Rwandan culture, history, teenagers… Basically, they wanted it “to be right.”

As I had chosen a serious topic, I was happy with their critical attitude. Therefore, I went for the fifth time to Rwanda. In five weeks I found the answers to all of Lemniscaat’s questions, and more. Back home, I adapted the manuscript accordingly. Based on this manuscript, Lemniscaat decided to publish the book.

But the manuscript still had to be edited. Since my editor had no prior knowledge of Rwanda, more questions arose about the Rwandan context. I had to check and double-check every detail. Finally, the copy editor questioned the choice of specific words. It was a long process.

Currently the book is published in Dutch. Are there plans for the book to be made available in English so that it can reach a wider audience?

Yes, there are. Lemniscaat has advertised the book in their latest brochure The Best of the Best. It contains their offer for foreign publishers. For that reason, the first chapter of the book has already been translated into English. To translate the entire book, publishers and translators can apply for grants from the Dutch Literary Foundation. Publishers interested in The Tree with Bitter Leaves, can contact Lemniscaat by this email address.

Personally, I would very much welcome this. The Tree with Bitter Leaves is both a specific story about a post-genocide society, as well as a universal story. I think the story would resonate with a wider, international audience. Moreover, the book would become accessible for Rwandans. Then the story can return to where it began. 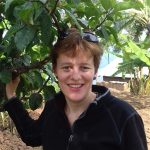 Ruth Erica is a writer and a cultural anthropologist. Last August, her debut De boom met de bittere bladeren (The Tree with Bitter Leaves) was published in the Netherlands and Belgium by Lemniscaat. This young adult novel is set in Rwanda. It’s about the genocide and the fine line between perpetrators and victims. The protagonist is seventeen-year-old Maridadi, who was very young when these events took place. The cover of the book is an embroidery art work by the Rwandan artist group Savane Kibuye:

For her stories, Ruth is inspired by her experiences as an anthropologist and development worker. In development cooperation she worked in the field of communications, but mainly in project management. As a project manager she was among others responsible for the selection, monitoring and evaluation of projects in Africa, Asia and the Middle East.

Ruth is a graduate of Prose for Children at the academy for creative writing Script Plus, and a member of the Society for Children’s Book Writers and Illustrators (SCBWI). She frequently blogs on her website about her creative journey.