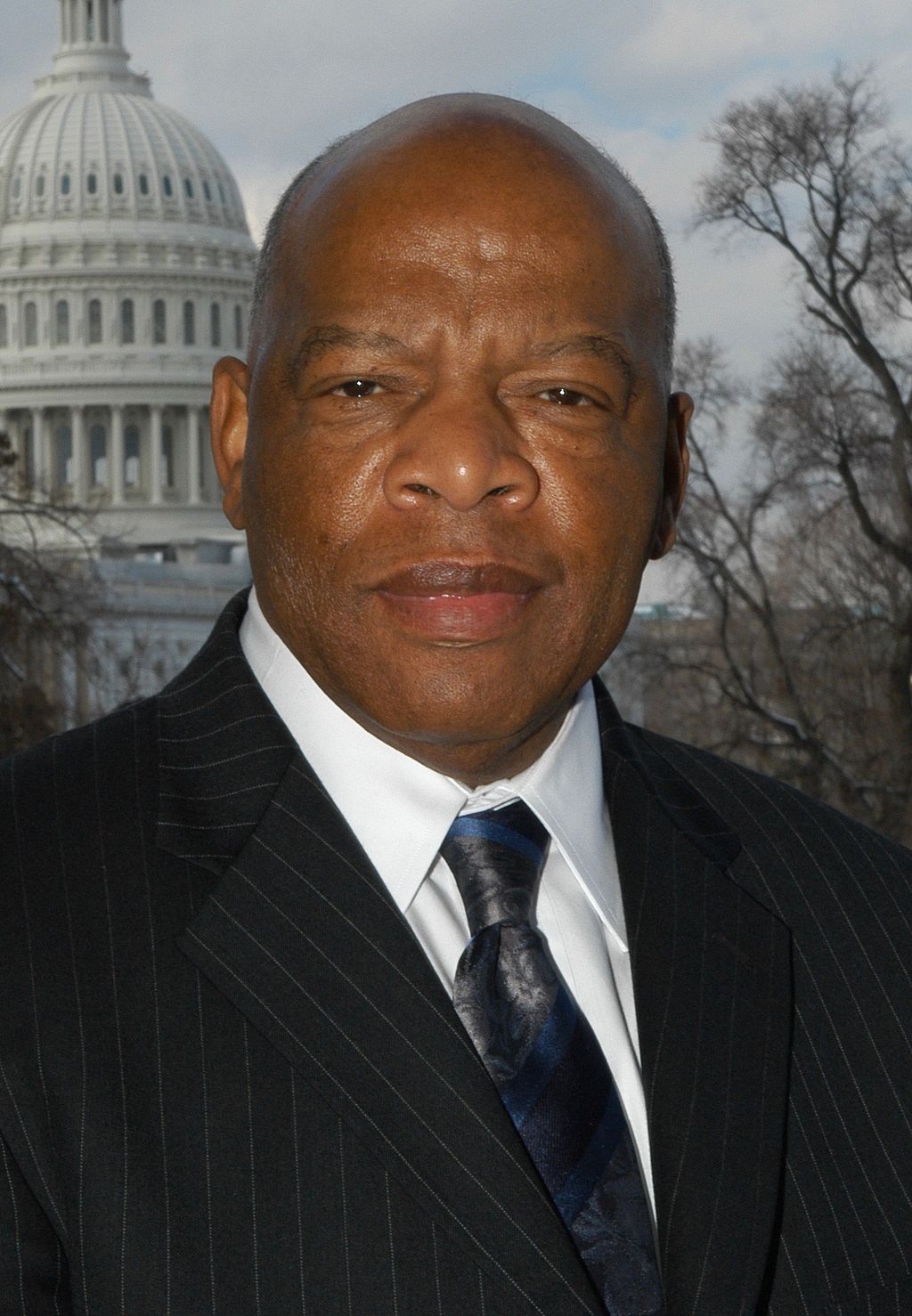 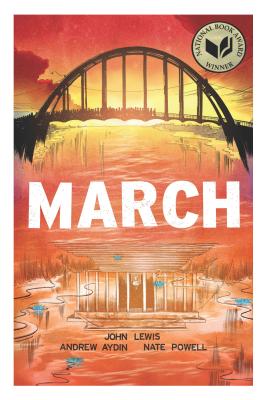 John Lewis, Towering Figure of Civil Rights Era, Dies at 80 by Katharine Q. Seelye from The New York Times. Peek: “Representative John Lewis, a son of sharecroppers and an apostle of nonviolence who was bloodied at Selma and across the Jim Crow South in the historic struggle for racial equality, and who then carried a mantle of moral authority into Congress, died on Friday.”

John Lewis, front-line civil rights leader and eminence of Capitol Hill, dies at 80 by Laurence I. Barrett from The Washington Post. Peek: “Mr. Lewis . . . announced his diagnosis of pancreatic cancer . . . ‘I have been in some kind of fight — for freedom, equality, basic human rights — for nearly my entire life,’ he said . . . ‘I have never faced a fight quite like the one I have now.’”

My Statement on the Passing of Rep. John Lewis by Barack Obama from Medium. Peek: “He loved this country so much that he risked his life and his blood so that it might live up to its promise. . . . he not only gave all of himself to the cause of freedom and justice, but inspired generations that followed to try to live up to his example.”

John Lewis, Heroic Civil Rights Leader, Dies at 80 by Calvin Reid from Publishers Weekly. Peek: John Lewis’s March trilogy “is a work of graphic memoir that follows the arc of Lewis’s heroic career from the beginnings of his involvement with the Civil Rights Movement and ending by connecting his grand narrative with the symbolic power of the inauguration of president Barack Obama in 2008.”

Representative Lewis was born Feb. 21, 1940 near Troy, Alabama. His parents were tenet farmers who encouraged their son to accept the world as he found it saying, “That’s the way it is, don’t get in trouble.” In his National Book Award acceptance speech for March 3 (Top Shelf, 2016) he recounted being turned away from acquiring a public library card because “libraries were whites only.” He said, “To come here and receive this award, this honor . . . It’s too much.” He extolled the encouragement received from a teacher in elementary school, “‘Read, my child, read’ and I tried to read everything,” he said. “I love books.” 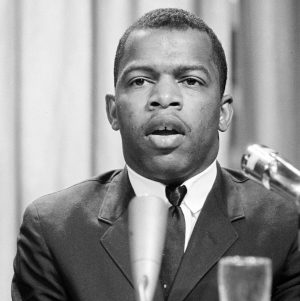 Mr. Lewis studied at American Baptist Theological Seminary, now American Baptist College, and earned a bachelor’s degree in religion and philosophy from Fisk University in 1967. Meanwhile, inspired by Dr. Martin Luther King, Jr. and the Montgomery bus boycott he joined the civil rights movement. To his parents’ dismay, he would “get into trouble, good trouble, necessary trouble.”

Mentored by Rev. James M Lawson Jr., he was one of the original 13 Freedom Riders, a founder and leader of the Student Nonviolent Coordinating Committee organizing lunch-counter sit-ins. He helped organize the 1963 March on Washington, D.C. where Dr. King gave his “I Have a Dream” speech. Rep. Lewis also addressed the crowd proclaiming, “By the force of our demands, our determination and our numbers, we shall splinter the segregated South into a thousand pieces and put them together in the image of God and democracy.”

Perhaps Rep. Lewis is best known for the march he led on March 7, 1965, one of the most famous in American history. He led 600 people partway across the Edmund Pettus Bridge in Selma, Alabama demanding the voting rights they had been denied. State troopers unleashed tear gas, bullwhips, and barbed wire on the protestors on what has become known as Bloody Sunday. A state trooper fractured Rep. Lewis’s skull and hit him again when he tried to get up.

The televised coverage of the violence solidified support for the Voting Rights Act that Congress passed and President Lyndon B. Johnson signed into law on Aug. 6, 1965. 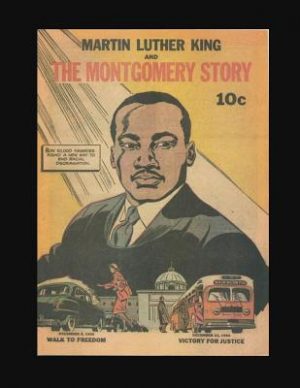 Rep. Lewis recounts this history and his role in it in his graphic memoir trilogy March written with Andrew Aydin and illustrated by Nate Powell. It was Dr. King’s 1950s comic book Martin Luther King and the Montgomery Story that helped inspire young activists during the civil rights movement that helped Rep. Lewis find his form.

How Rep. John Lewis’s ‘March’s trilogy found inspiration in a 60-year-old MLK comic book by Michael Cavna from The Washington Post. Peek: “ . . . it was a comic book about King published six decades ago—a comic that first launched the young Lewis on his heroic path of historic nonviolent protest—that helped illuminate his steps.”

Civil Rights Icon John Lewis Speaks About His ‘March’ Graphic Novels and Political Activism by Lincoln Anthony Blades from Teen Vogue. Peek: “John Lewis: ‘… March is really so relevant to what is happening right now not only in America, but all over the world. March is emerging as the blueprint and as the road map.’”

While a leader for his entire adult life, Rep. Lewis was elected to Congress from Georgia in 1986. In 1968 he was a part of Robert Kennedy’s campaign and present at Kennedy’s assassination. Rep. Lewis ran for a U.S. House seat in 1977. In 1981, he won a city council seat in Atlanta. He was known for pursuing justice and as “the conscience of Congress” by colleagues.

President Barack Obama, author of Of Thee I Sing: A Letter to My Daughters, illustrated by Loren Long (Knopf, 2010), awarded Rep. Lewis with the Presidential Medal of Freedom in 2011, the United States’ highest civilian award. 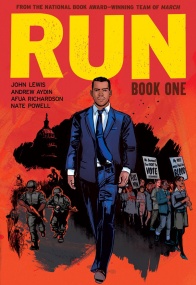 Abrams Books announced they would publish in multiple parts, Run, the story of Rep. Lewis’s political career, picking up where the March series left off.

Social media remembrances to Rep. Lewis from his March co-creators Andrew Aydin and Nate Powell and from his publisher Top Shelf Productions.

“’Hamilton‘ dramatizes the fact that the founders of the United States wrote this nation into existence; I will always remember John Lewis, founding father of a better America, as an extraordinary writer.

“We met at the National Book Awards in 2016. I kept my distance at first, because I was a judge and therefore one of the few people in that great big ballroom who already knew that March: Book Three was going to win . . . and I have no poker face. 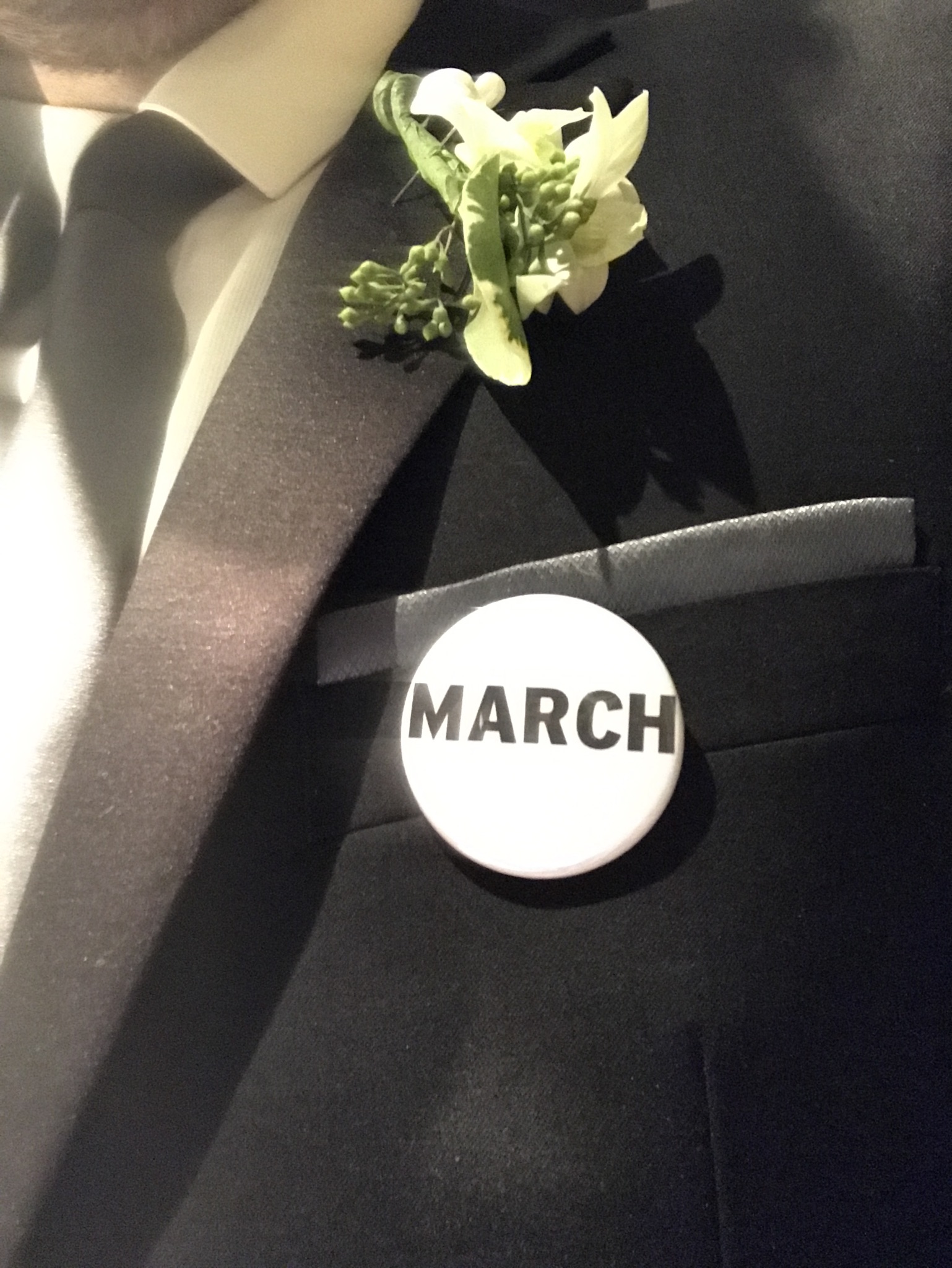 “I did chat briefly with Andrew Aydin, the congressional staffer and comics fan who asked his boss to collaborate on a graphic memoir—an idea just as bonkers and beautiful as staging a hip-hop musical about the nation’s first treasury secretary. Rep. Aydin gave me a button. It reads MARCH in black letters on a white background. Somehow I managed to avoid giving him preemptive congrats in return.

“Katherine Paterson took the stage and named John Lewis, Andrew Aydin, and Nate Powell—the first creators of a comic book to ever receive a National Book Award. All three reached the podium in tears.

“John Lewis told us about trying to get a library card at the age of sixteen, and how the privileges of the public library in Alabama were then reserved for whites only.

“He is in every library now.

“Read his story, children. Read and find out what it means to get into good and necessary trouble. Read and understand that the excellence of March is both timely and timeless, that the history it describes isn’t over yet, and that we can still march toward a fuller, fairer, and better version of ourselves.”

“One of the most amazing moments of my life came when I handed Congressman John Lewis the National Book Award for his graphic novel memoir March: Book 3.

“I had known of Rep. Lewis since 1965 when he was beaten almost fatally at the Edmund Pettus Bridge in Selma, Alabama, leading American citizens who simply wanted to go to the city hall to register to vote. In the NYT obituary you can read of his years as a civil rights leader and congressman, where his colleagues called him ‘the conscience of the Congress.’ 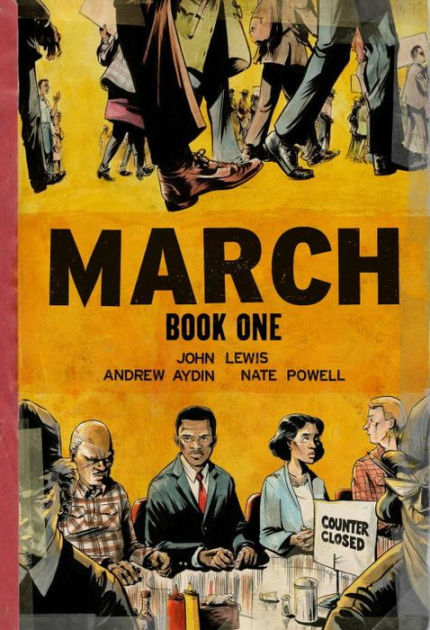 “The first volume of his amazing memoir March: Book One was the Vermont Reads choice for 2019. Congressman Lewis was invited to come to Vermont to speak to Vermonters about the book and his life.

“He agreed to come with three provisions: 1) He be allowed to speak to as many young people as possible. He didn’t care if any adults showed up, but the audiences must be overwhelmingly young. 2) He would be introduced by his close friend, Senator Patrick Leahy, and 3) He could visit Ben and Jerry’s for some ice cream.

“The humanities council happily agreed to all three requests. Schools from all over the state called for reservations for middle and high school students to come Burlington’s Flynn Theater. The 5000-seat theater was quickly filled, so Congressman Lewis said he thought we should offer a second session.

“Those seats went immediately as well, and, as I recall, there were several thousand names on the waiting list. There was an evening session which allowed the general population to apply for tickets. That session, also, was quickly filled, with a long waiting list and people outside the theater begging for tickets from lucky ticket holders filing into the Flynn.

“At all three sessions, Senator Leahy introduced the congressman along with his aide and co-author, Andrew Aydin. But I was invited, along with Congressman Peter Welch, to join Senator Leahy with the introductions to the young audiences. Senator Bernie Sanders sent regrets from his hospital bed, or he would have been there as well.

“At lunch after the last presentation, I had the privilege of sitting directly across from Congressman Lewis. As tired as he must have been, he carried on a lively conversation. He had a wry sense of humor and rarely smiled during the presentations, even when the audience was laughing loudly. But at lunchtime, he smiled broadly and often laughed. Before we said goodbye, he invited me to come to see him in Washington, promising to give me a tour and take me to lunch. We never kept that date. That December he was diagnosed with pancreatic cancer.

“I know the world has lost a great man, but right now I’m shedding tears for a friend.” 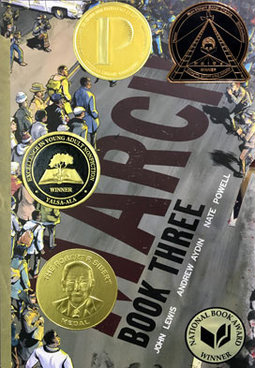 In the essay he wrote to be published in The New York Times after his death, Rep. Lewis leaves the world with these words:

“I urge you to answer the highest calling of your heart and stand up for what you truly believe. In my life I have done all I can to demonstrate that the way of peace, the way of love and nonviolence is the more excellent way. Now it is your turn to let freedom ring.”