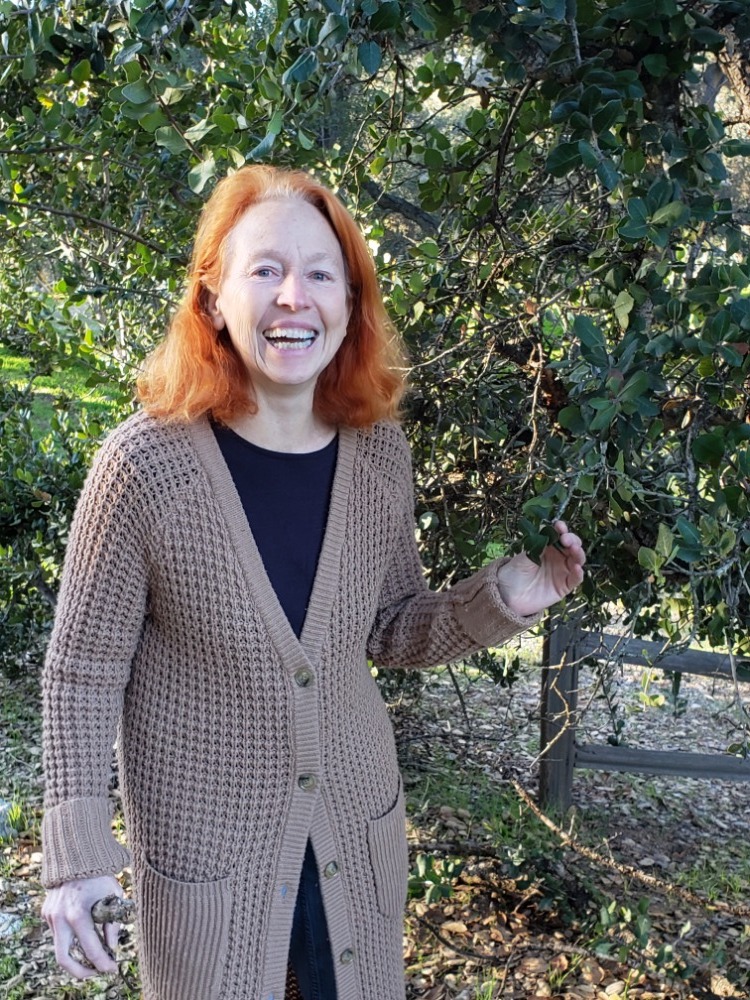 By Stephani Martinell Eaton, above photo by Lisa Ratnavira

Kathleen Duey, award-winning and beloved author, teacher, and mentor died from cardiac arrest on June 26 at her home in Fallbrook, California. She was 69.

Kathleen Duey, a Mentoring Children’s Book Author, Dies at 69 from The New York Times. Peek: “A prolific writer, she published more than 75 books, including a Best Seller and a National Book Award finalist, all while encouraging aspiring authors.”

Born on October 8, 1950 in Sayre, Oklahoma, her family later relocated to Fort Collins, Colorado. She briefly attended the University of Colorado.

In 1985, she met novelist Karen A. Bale. The two communicated for years, finally collaborating in the 1990s on the middle-grade series Survivors (Aladdin) that were set during major disasters such as the Titanic’s sinking and The Great Chicago Fire. 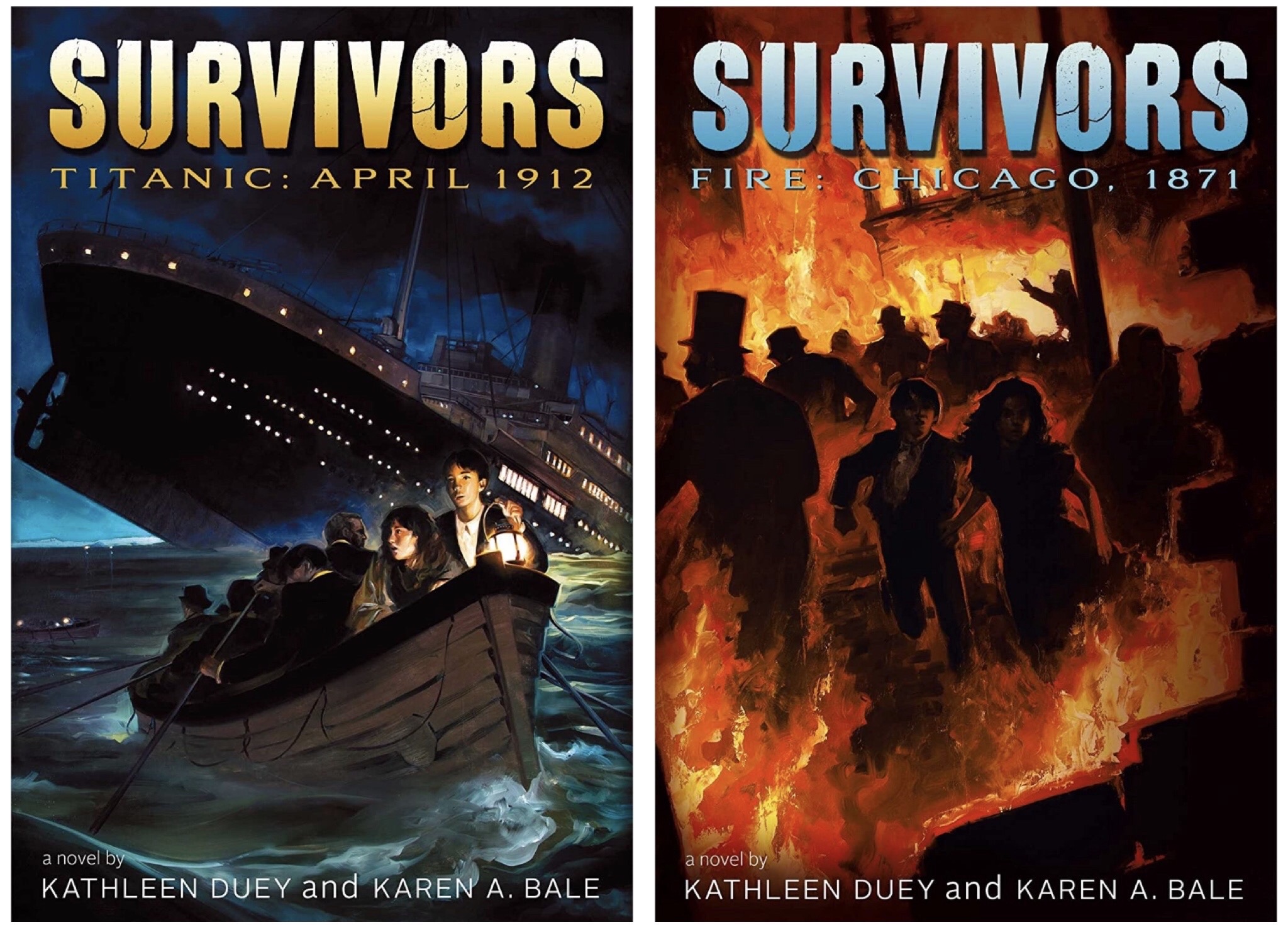 Duey authored more than 75 books for children, including the National Book Award nominee, Skin Hunger (Simon and Schuster, 2007) and New York Times bestselling Spirit: Stallion of the Cimarron, (Puffin, 2002), which a novelization of the animated DreamWorks movie by the same name.

While prolific, Duey gained a reputation as a generous teacher and mentor. 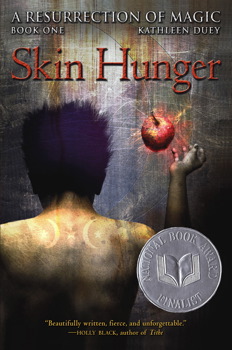 In a 2007 interview with Cynsations, Duey described herself:

“I love and hate writing. We have no intention of splitting up, but there are rough days. I have written over 70 books for pre-readers through adults. I believe that literacy–the ability to pass on stories and facts through writing and reading–is a pillar of civilization.

“And so I am glad to live in interesting times. I am fascinated and excited as I watch media mix into wonderful new forms. I am terrified and excited to see the role of books and the existence of copyright–a relatively recent overlay–in flux worldwide. But the human need for story seems endless. That happy fact diminishes my chances of ever needing a day job.” 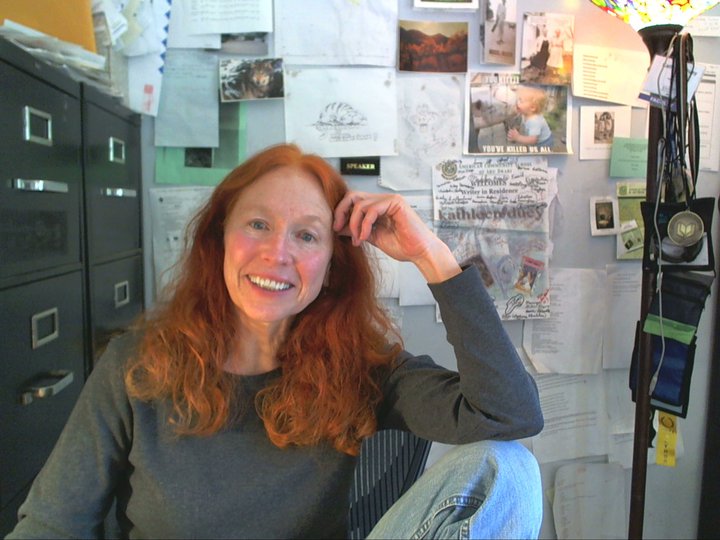 Friend and co-author Karen A. Bale shares her memory of Kathleen:

“She and I met in 1983 by chance. I was in her town speaking about my books to a ladies’ club, and Kathleen was down the street doing laundry. She took a walk, saw the sign on the building that a writer was speaking, and she came in.

“I was on a stool answering questions about writing and suddenly she said: ‘So, with five year old twins, do you just slap peanut butter and jelly sandwiches together and send them outside to play so you can write?’

“That really made me laugh. I responded: ‘Pretty much that’s how it works.’

“After I was done speaking, I was talking to people but looking for the young woman who was my age. Out of nowhere she came up to me and handed me a piece of paper. ‘This is my name and number if you want to talk more. I am also a writer and I have a four and six year old at home. I figured we might have a lot to talk about.’

“I called her that night when everyone was in bed and found out that Kathleen had been struggling with agoraphobia for years. That day she had forced herself to go into town because she hadn’t gone anywhere in a long time. She just happened to see the sign that I was speaking. I told her It was meant to be. We talked almost every day or night for three years before we met in person again.

“Our friendship continued to grow and we even collaborated on a middle grade historical series for boys and girls. It was an 11 book series called Survival (now Survivors) and we wrote all of the books on the phone. I did most of the research because she was working on something else, and then we would come up with an idea, the research, the two main characters, a couple ideas of what might happen, then we just went with it.

“Sometimes we were on the phone working 12 hours, but usually, it was around eight-to-nine hours. It seemed perfectly normal to us to work that way. We had bathroom breaks, food breaks, and stretch breaks, but our days writing that series were pretty solid. We were proud of that series and we loved that we were able to write something that might have meaning to both girls and boys, and we loved working together.

“Working with her was a pleasure. Having her as a dear friend was an honor.”

“Kathleen was such a kind person. I didn’t know her well, but I remember her replying to questions early in my career. I really admired her industry, coming up with series and being the kind of writer editors could count on. But writers could count on her, too. She could have held that knowledge and expertise close to the vest, but she was always willing to take time from her own projects to answer questions and offer advice and encouragement. She was so generous. I’ll never forget that about her.”

“I had the pleasure of getting to know Kathleen during my tenure as VP, Publisher of Atheneum Books for Young Readers during the period in which she was writing Skin Hunger, followed by Sacred Scars. What a wonderfully witty, sharp, clever, kind woman she was.

“I always learned from her, and felt so honored when she brought me into her confidence to talk candidly about the changes we were experiencing in publishing, how hard writing is, the importance of women standing up for what they need and want, and so much more. Kathleen was a mentor and guide to many, including to me. I will miss her very much, and am so glad her books live on to engage, encourage, and inspire readers.”

“I was blessed to know Kathleen Duey. She was a friend. The first time I met her was at the SCBWI conference in LA in 2000. I sent in a manuscript for evaluation and I was given her as the best fit for my work. It was supposed to be a 15-minute meeting. I remember how nervous I was to talk to a real author. I didn’t realize I was going to talk to a new friend. We sat there for hours chatting about life and about writing, and about the intersection of those two things. We talked about loss. The loss of her son. The loss of my mom from Alzheimer’s. Both of us struggled with how life is so incomprehensible.

“Today you might be getting a big acceptance, but you might also be holding the hand of someone dying who you love with all your heart. We talked about finding the balance in this blinding life. She helped me find peace after my loss. It was one of those conversations that you remember your whole life, that you tuck in your heart, and you never forget. She helped me grieve for my mom. It was supposed to be a 15-minute critique. That was Kathleen.

“My second memory: we emailed each other many times after that. We were Facebook friends. We groused about deadlines, plotting, and the ever-difficult life balance. I will always remember the last message I received from Kathleen. I was hoping for the third book in her Resurrection of Magic series. Did I mention that Sacred Scars is one of favorite books of all time? I wrote I was worried about Sadima, and she wrote back that she was worried too. Yes, Kathleen’s characters are so real we worried.

“Shortly thereafter I learned there would never be another book, dear Kathleen was ill with the same disease that took my mom. There are no answers to so many tragic things we experience. The loss of Kathleen took my breath away. She lived this life with fierce love and dignity and wrote with a honesty that revealed the soul. She has moved on to the great beyond, and I am grateful for the Magic she sowed in my heart before she left us too soon.”

Richard Cusick, Kathleen’s partner for near 30 years, shared with us:

“She will be missed terribly by her son Garrett, her sister Cindy, her many friends . . . especially Karen A. Bale, my/our family, young readers everywhere and me. I will miss her compassion, her strength and determination, her creativity, her amazing writing and storytelling ability, her advice, her sparkling blue eyes, her smell, her intelligence, Henna (mahogany), her dancing, singing and guitar playing, her fried chicken, the sound of a shovel and her healing touch. I will miss her, I’m certain, in ways I haven’t imagined yet.

“Kathleen, you are my best friend and the love of my life. I held your hand as we began our life together….when leaving the house and driving in a car was hard for you….when I struggled with anxiety . . . when we bought our house . . .when your dad died . . . when Garrett was searching and when he found his way . . . when we lost your oldest son, Seth, too soon . . . every time you sold a book idea or one got rejected . . . while we watched ‘The Nutcracker’ at Christmas, in Boston . . . every single walk we took . . . every concert we attended . . . when you were nominated for a National Book Award . . . and all you could do was tell me why every other book nominated in your category should win . . . and I was holding your hand and telling you how much I love you when you took that last breath and left your suffering behind.

“I’ll see your beautiful face in the clouds, hear your voice in the soft evening breeze and feel you next to me whenever the jasmine blooms. I’ll always love you, bub . . . For ever.”