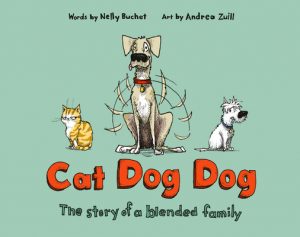 Nelly Buchet and Andrea Zuill are the author and illustrator, respectively, of Cat Dog Dog: The Story of a Blended Family (Schwartz & Wade, 2020). Both are represented by Hen&ink Literary Studio.

Nelly is an actor and a debut author. Bonnier will publish her Can’t Do board book series in 2021.

Happily, on their way to their first-ever virtual book launch with The Writing Barn in Austin, Texas, Andrea and Nelly chatted about the making of Cat Cat Dog.

Andrea: What was your inspiration for Cat Cat Dog?

Nelly: I was at my parents’ house for Christmas. We have a cat, a Cocker Spaniel and a ab (I could probably just end the inspiration story at that). The Cocker Spaniel, Bingley, was very sick and becoming weaker, which meant the power dynamics were shifting with the cat growing more comfortable around him, stealing his food, etc.

One night as I was falling asleep with the Lab breathing heavily in my ear, I heard the cat scratching at my door. I opened it to let him in. I hadn’t ever spent the night with them together, but I was pretty sure they wouldn’t kill each other.

I settled back under the covers only to hear the trotting nails on floorboard that I knew to be Bingley’s. He stopped outside the door.

I held my breath, like that would change anything.

The door squeaked open. He couldn’t jump anymore so I scooped him up.

While I was stumbling in the dark, the cat changed positions and I dropped Bingley on a warm, soft, smaller thing—the cat. I thought for sure Bingley would go on a murder rampage, but instead he snuggled up a few inches over and fell asleep. The Lab hadn’t budged this whole time.

I had all three animals on me, did not sleep and thought, Cat Cat Dog!

Nelly: What attracted you to the manuscript “Cat Cat Dog?”

Andrea: It was the mere fact that I’d get to do a story with dogs and a cat. Two of my favorite things to draw. The story was so open to interpretation that the possibilities were endless.

Andrea: Where does the comedy come from if it’s not innately in the words?

Nelly: I’d say the humor comes from the juxtaposition of the words and pictures. The subtext is very loud and emotional, much like an internet meme. The humor comes from the space between that we fill with our own self-awareness. It’s funny because we relate—to Cat having to deal with a little brother, to Dog being annoyed at having to share his perfect world, to the characters as pets in our lives.

Fewer words often make for more powerful memes. You don’t need to draw out a joke when the set-up is implied in the pictured punchline.

I think the comedy also comes from how the words are processed by the reader. Like “Squirrel!” in Pixar’s “Up,” the words are labels a child or animal would use or respond to.

Rhythm is always so satisfying, and suddenly, we have a subconscious piece of music going on in our heads, with declinations of the opening theme (“Cat Dog Dog”) morphing into verse, chorus, bridge, break, coda….

The ultimate example being Bach’s “The Well-Tempered Clavier” that takes a structure of notes and reimagines the combinations in different ways to conjure emotion, meaning, or no meaning at all—which means something in itself. Granted, Bach is not particularly hilarious. But you get my point.

Nelly: The manuscript included extensive illustration notes, basically slug lines and and screen directions. It was magic to see you bring the story to life, especially with regards to capturing the comedic timing in pictures. What was challenging about illustrating this script?

Andrea: I love having author notes, and in Cat Dog Dog, which has few words, it was necessary.

I used Nelly’s ideas for my first run through the story, and as I did that, new ideas began popping up in my head. It was time to make changes to Nelly’s interpretation, and I needed to make the characters mine. There is always a bit of trepidation in this, but the cat and dogs morphed into animals in knew in my life. The humor is based on real events I’ve witnessed and the quirks inherent in animal behavior.

Nelly: Do you have a favorite spread?

Andrea: I loved doing the holiday spreads. Even though there isn’t a lot of movement I believe I was still able to give hints of each character’s personality.

Nelly: Favorite is tough. I love the cover because your unique color scheme immediately transports us to the alternate, heightened reality of the story. It really stands out on a bookshelf.

I also love the last spread. It was the most clear in my mind when writing and you made it come to life exactly as imagined. 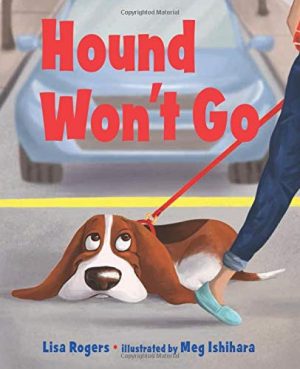 “The first five attendees to order Cat Dog Dog…prior to May 6 will receive a signed copy of the…poster ‘We Are All One Big (Blended) Family.’…; a portion of the proceeds…will benefit COVID-19 relief efforts and Austin Pets Alive!”

An Austin Pets Alive! representative will also speak. The free event is sponsored by BookPeople and The Writing Barn. Attendees are encouraged to order from the store; click titles above for purchase pages.