Note: This is part of a series focusing on the Bologna Children’s Bookfair.

Sarah Baker is the Director of Illustration and Artist Programs at the Society of Children’s Book Writers and Illustrators, where she manages and develops the illustrator grants, awards and scholarships, advises and mentors SCBWI illustrator members, and serves as the designer and art director for the Bulletin and all other SCBWI publications.

Hi Chris and Sarah! Thank you both for participating in the 2018 SCBWI Bologna Book Fair interview series.


Before we dive into SCBWI’s role, I’d like to ask about one of the bigger trends in children’s publishing. Chris, can you comment on reports saying the publishing industry in China is putting more emphasis on Chinese writers, instead of just seeking translated work? Is this having an impact on the amount of translated work, or is there room for both?

Chris: China was the country of focus this year at Bologna and that market is booming.

China is definitely promoting Chinese writers and illustrators and their works. Some promote work in more traditional Chinese style (art) while others have entries that are very influenced by published work outside of China.

There are now quite a few new China-based competitions that are focused solely on Chinese-created work. These are being promoted to Chinese creators. Some of these are also open to international creators as well and the SCBWI will be promoting some of these as the time draws near for those initiatives.

At the same time as publishing their own Chinese-created and -themed work, Chinese publishers are seeking titles created in other countries that are suitable for both translation and to be printed in English. I talked to a number of publishers who wanted the original book – not for translation but to publish in English. And they were engaging work that was relevant to Chinese children. But they very much also wanted to have the titles originating in China with Chinese themes and creatives to be published in English-speaking countries.


What is the role of SCBWI at Bologna? Can you share a bit about the history of the SCBWI booth at Bologna, how has it changed, and plans for the future?

Chris: SCBWI Bologna is all about showcasing the recently created PAL works of our global membership, whether they be authors or illustrators.

The first showcase, under the magical leadership of Erzsi Deàk, was held in 2004 in conjunction with a conference. That conference has now morphed into the Europolitan conference that is held in our non-Bologna years. 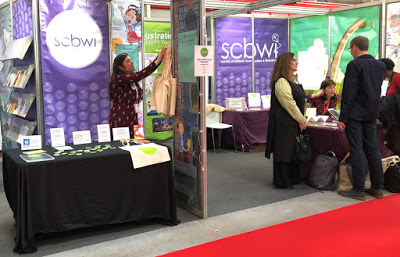 Our physical booth doubled in size in 2016. We also created our first digital catalogue that is now distributed to publishers in our global database.

Our showcase has always displayed the art from our illustrator members, but last year this evolved into a digital gallery that was judged by industry experts – the finalists were then on display on large panels having in our booth – providing not only an attractive appearance but also enticing publishers.

Members were able to showcase their work at the booth, and the illustrators creating art were a huge draw. Some of our members seen creating works at the showcase were then snaffled up for publication.

There were presentations from SCBWI at the author and illustrator cafes at the fair – these are always hugely popular.

But our author members were not left out.

This year we created the Dueling Illustrators Manuscript contest, where members were able to submit an unpublished picture book manuscript.

These were then judged by Emma Ledbetter (senior editor, Atheneum), and the top six manuscripts were read aloud for our extremely popular Dueling Illustrators Competition.

Also new this year was a team creating our Social Media Presence. We had Facebook, Twitter, and Instagram – all under the name of SCBWIBologna. Just search for #BBF18SCBWI and see what we were up to.

Our Bologna presence is always evolving, but crucial is the showcasing of our member’s recent PAL creations.

Sarah, you’ve participated in the Dueling Illustrators Competition that Chris mentioned. Can you tell us about that?

Sarah: What I can tell you is it was very nerve-wracking!

Until we actually got started drawing, that is, and then it was so much fun.

I had never drawn in front of people live before, much less while being timed and competing with someone else.

But once we got started, it was an enjoyable challenge to quickly decide how to tackle each scene, and to just go with your gut and follow through with each idea, since there’s no time to change your mind.

It was also really fun to see how I and the other illustrator, Susan Eaddy, came up with different ideas on how to compose the scene and interpret the text.

It was great to watch the Dueling illustrators at the 2018 booth!

What are your roles on the SCBWI Bologna team? How do you work together?

Chris: My role in our Bologna presence is to work with the team that presents the Bologna showcase. I coordinate many of the activities – I like spreadsheets and task lists – but the team creates Bologna.

We have an enormous number of emails swapping ideas and enhancing activities from previous fairs, and we also discuss the showcase at the New York and Los Angeles conferences.

Sarah: This year, I got more involved with the logistics of the booth, and bringing along “swag” like totebags, buttons, and postcards.

There is a lot of planning beforehand, meetings at various conferences, and lots and lots of emails! At the fair, it’s so fun to experience how everyone helping out at the booth works so well with each other.

It’s a great opportunity for members of SCBWI from all around the world to meet face to face and get to know one another better. Everyone does a great job of supporting our members participating in the booth with showcases, as well as informing the international publishing world about SCBWI.

Why should a member of SCBWI go to Bologna? What are the benefits? Writers versus Illustrators?

They can get a sense of the children’s book market worldwide, meet people from the industry, and get a huge dose of inspiration. It’s truly eye-opening to see all the books and publishers from around the world, and see that books and trends are different in various countries.

And for SCBWI members, visiting the fair during a year when the SCBWI booth is on (every other year) gives them a nice homebase. While visiting the fair is beneficial for anyone creating children’s books, there is a distinct focus on illustration.

It’s somewhat easier for illustrators to bring postcards and pass them around to people they meet, which can lead to all sorts of opportunities after the fair. A great benefit for SCBWI members is that they can be represented at the fair even if they aren’t attending, by participating in the SCBWI Bologna Rights Catalogue and Showcase.

What tips can you give to new attendees on navigating the fair?

Sarah: The fair is huge and can be very overwhelming!

Make sure you check out the schedule ahead of time and pick out which events, workshops, and interviews you don’t want to miss. Also, give yourself ample time to roam around freely and take it all in.

Don’t ignore the halls housing booths from countries and continents that are very foreign to you. It’s an opportunity you don’t want to miss. Also, check out this wonderful blog post by SCBWI Andy Musser for great tips on visiting the fair.

Thank you, Chris and Sarah, for your time and insight. I’m already looking forward to SCBWI Bologna 2020! 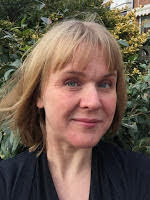 At the age of 12 Melanie Rook Welfing’s life ambition was to be part-time author, part-time roller skater. The skating dreams died, along with the ’80s hair, but the author dream lives on.

Melanie writes primarily for middle graders and has had stories published in Highlights and other magazines.

Originally from the west coast of Canada, Melanie now lives in the Netherlands with her husband and two daughters.

She is the Regional Advisor for SCBWI in the Netherlands.