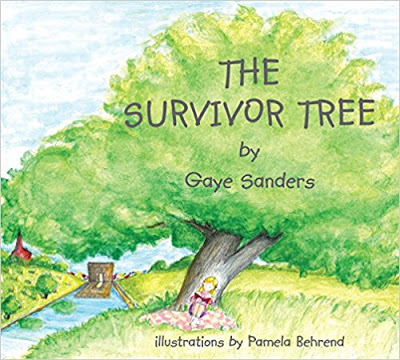 Gaye Sanders is the debut author of The Survivor Tree, illustrated by Pamela Behrend (RoadRunner Press, 2017). From the promotional copy:

A family plants an American elm on the Oklahoma prairie just as the city is taking root—and the little tree grows as Oklahoma City grows until 9:02 a.m. on April 19, 1995, the day America fell silent at the hands of one of its own.

As rubble from the Alfred P. Murrah Building in Oklahoma City, Oklahoma, is cleared, the charred tree—its branches tattered and filled with evidence—faces calls that it be cut down. The only obstacle: a few people who marvel that, like them, it is still there at all.


The next spring when the first new leaf appears proving the tree is alive, word spreads like a prairie wildfire through the city and the world. And the tree, now a beacon of hope and strength, is given a new name: The Survivor Tree.

I have been an elementary teacher for 35 years, teaching second, third, and, most recently fourth grades. I’ve loved all of the ages, but fourth is by far my favorite. A few years ago, I began to think about my life after retirement, wondering what I could do.

To say I’ve always been a book nerd is an understatement, and I’ve consistently used literature in my teaching. I realized that I knew more about children’s literature than anything else, and made the decision to dive into this thing, writing for children, head first.

Important note: sometimes when you dive head first you hit rock bottom. I might not have hit rock bottom, but I wasn’t successful. That is, until I found SCBWI.

Being a member of SCBWI has helped me immeasurably in my writing career. In fact, I venture to say, had I not found this organization, I might have given up the dream by now.

All that aside, the most inspiring thing is seeing the looks of wonder on the faces of those children when you share a story with them.

In the hard times, that’s what keeps me going. It’s not about me, it’s about them.

When you are a writer, you rotate between writing, editing, and revising. But you are also, at all times, thinking about what your next story will be.

Many times, we choose the story we are writing. We may get a spark of an idea, and work to develop it into a full story. But sometimes, in those rare moments, a story finds us.

Almost four years ago, on a visit to New York City, my sister and I got to experience the 9-11 Memorial. During our visit to the gift shop, I discovered a book about the 9-11 Survivor Tree. Until that moment, I had not realized they had a survivor tree.

Their tree has a much different story than ours. It was recovered from some of the rubble and replanted, nursed back to health and transplanted to the grounds when the memorial was finished.

I decided to buy that book, and then find the book about our Survivor Tree. I came home and began to look for one, and that was when I discovered there wasn’t one.

There needed to be.

That idea sat on my heart for a couple of years. The seed of the idea planted itself there, and wouldn’t go away. And,I knew that a story had found me. A story that needed to be told.

My biggest challenges were in keeping to the heart of the story of this tree, telling the story of what happened, without putting the focus strictly on the bombing itself. I wanted this to be a story of hope, and how love conquers hate.

The text doesn’t mention the names of those responsible. We didn’t want the book to be about that. However, it does state that they were caught and would face the consequences. We wanted to make sure the children understood that.

At the same time, I didn’t want to gloss over the details too much, nor water it down. When the bombing happened, we, as a city and state, promised to never forget. This book is an offering to that promise.

There are no accounts of survivors or medical personnel individually, but the story does talk about how they came to help. In the list of those killed, the nurse who died as a result of injuries she sustained while serving in rescue is listed specifically for that.

The Oklahoma City National Memorial was more than helpful in allowing my research. I was honored to spend an entire day in the archives, going through photos, evidence lists, FBI notes, and more. It was a crucial part of the research.

But, you can’t research something like this without feeling it from deep within. I lived here when this awful travesty occurred, I knew people who lost family members, and I knew others who survived. So, needless to say, I shed more than my share of tears through this journey.

As an unagented author, how did you identify your editor and connect the manuscript with the publishing house?

After I wrote my story, I began subbing it out to agents. Most agents quickly responded with the standard reply of “While your writing is strong, this is not what we are looking for at this time…”

A fellow SCBWI (Oklahoma) member suggested I look into submitting to RoadRunner Press, a local traditional publisher. RoadRunner has published high quality children’s literature for nearly a decade, and several of their books have won the Oklahoma Book Award. I sent my submission and received an immediate response of yes!

Jeanne Devlin, the editor of RoadRunner, just so happened to be on the staff of Oklahoma Today when the bombing occurred. The magazine ran a special issue a few weeks after the bombing called 9:02 (the moment of the explosion). That issue is still sold, and has been a cornerstone for information about the hours and days following April 19, 1995.

Teaching and writing are both careers that demand a lot out of you, but at least they’re compatible with one another. Transitioning from writer to author has required me to learn to compartmentalize, be organized, and commit.

By compartmentalize, I mean that when I’m teaching, I do my best to keep my focus there. I stay at school at least an extra hour every day so I can be on top of things, while not bringing home papers to grade or lesson plans to complete.

When I’m home, I devote a chunk of whatever time I have left to writing and revising, (because we are always moving on to the next manuscript.)
But in that time, I prioritize.

If I have interview questions, book signings, or revisions from my editor, those take up a portion of my writing time. Plus, I know that the marketing and social media aspect are crucial in this day and age, and in this competitive world of being an author and selling books.

The committing is the tricky part. And sometimes, you have to forgo all the best intentions, and take some “me” time.

Read something just for pleasure, get out and take a walk, go see a great movie or live theater, go to an art museum, take a day trip. As writers, we all need those times. It’s how we “fill the well” of our creativity! 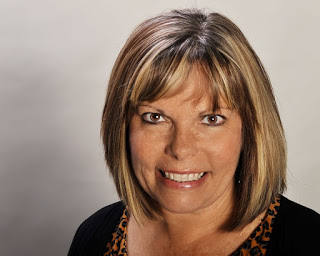 Gaye Sanders teaches fourth grade at Mustang Public Schools, a suburb of Oklahoma City, and makes it a point to share the historic story of the Oklahoma City bombing with her students every year.

Born and reared in Fritch, Texas, she earned an associate’s degree from Frank Phillips Junior College and a bachelor’s degree in elementary education from Oklahoma Panhandle State University.

The mother of two grown sons, Gaye makes her home in Yukon, Oklahoma.