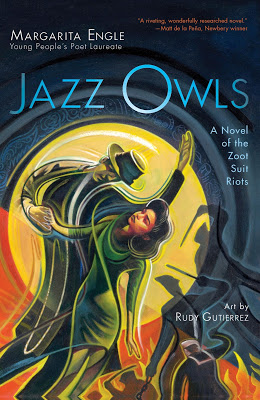 “During World War II, my hometown of Los Angeles, California became the scene of riots so strange that they don’t seem real, unless viewed through the lens of modern trends toward increasing racial violence.

“Sailors on their way to the battlefields of World War II attacked
Mexican-American teenage boys, beating them, stripping them of their zoot suits, and setting the clothing on fire. Unwilling to arrest men in
uniform, police arrested the zooters instead.

“Clothes were not the real motive behind these shocking attacks. Interracial swing dancing was the trigger for white supremacist violence.

“I chose to narrate this complex story in free verse, using many voices, including a Mexican-American family, a Cuban musician, policemen, sailors, reporters, and the ghost of a murdered man.

“I hope Jazz Owls will help young readers understand how World War II changed the roles of women, as well as the hopes and dreams of Latinos in the U.S.” 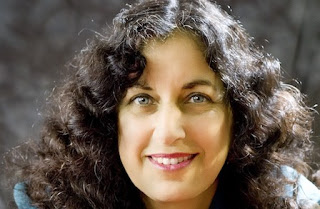 Margarita Engle is the 2017-2019 national Young People’s Poet Laureate, and the first Latino to receive that honor.

She is the Cuban-American author of many verse novels, including The Surrender Tree, a Newbery Honor winner, and The Lightning Dreamer, a PEN USA Award recipient.

Her newest verse novel about the island is Forest World, and her newest picture books are All the Way to Havana, and Miguel’s Brave Knight, Young Cervantes and His Dream of Don Quixote.

Books forthcoming in 2018 include The Flying Girl, How Aída de Acosta learned to Soar, and Jazz Owls, a Novel of the Zoot Suit Riots.

Margarita was born in Los Angeles, but developed a deep attachment to her mother’s homeland during childhood summers with relatives. She was trained as an agronomist and botanist. She lives in central California with her husband.