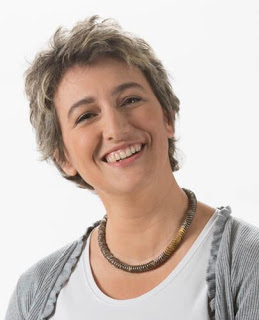 Note: Cynsations reporter Angela Cerrito interviewed Simona M. Ceccarelli, winner of the portfolio contest that took place at the SCBWI Europolitan Con in Belgium earlier this year. This is the first of two articles.

Simona M. Ceccarelli is a freshly hatched children’s writer and illustrator. A passion for visual storytelling and the success of her early whiteboard animation series “Drawn to Science” has actually drawn her out of a career in science to focus on creating worlds for children – with pen and pencil, keyboard and stylus.


What made you decide to enter your portfolio?


SCBWI conferences are great. You meet adults who don’t think it’s weird to talk about children’s books for hours. You can quote Dr. Seuss or Shel Silverstein and everybody gets it. The chance to show your work to such people – be it writers, other illustrators or industry professionals – and get their opinion is too good to pass up.

How did you decide which illustrations to include in your portfolio for the competition?

Selecting images for a portfolio is a tough call, and, when it comes back from the printer, there is always some illustrations you wish you had included and some you would like to take out.

Luckily, you can also bring postcards – and ultimately, all your work represents you in one way or another. I picked the pieces I like most, trying to show a range of different subjects – children, animals, fantasy creatures – full scenes with background as well as vignettes and character design.

And of course a set of illustrations that show character consistency, which is very important in children’s book illustration.

Most of all, how did it feel when your name was announced by the judges Laurent Linn of Simon & Schuster (also an SCBWI Board Member) and Stephanie Amster of Bloomsbury UK?

I had this sudden sense of having hopped thorough a magic portal into an alternate reality.

I often have that feeling when something good and unexpected happens to me: it must have happened to a different person…an alternate me. For a while, every time the self-doubt monster attacks (I should do a graphic short-story about that!), I can whack it on the head with this award and send it cowering to a corner.

I’m so curious about your use of Zbrush in your illustrations. The company, Pixologic, describes Zbrush as a tool for 3D painting and sculpting. What drew you to Zbrush?

I studied Visual Development for animation, where many of my teachers insisted that “the ability to visualize in 3D” is one of the most important skills an artist should have. My thesis advisor, Nicolas Villareal, wrote that in every single review: I struggled with turning characters in my head.

ZBrush was just being introduced in the curriculum of Vis Dev artists, and I thought I would give it a try. I fell in love with it heart over heels (admittedly, I have a sweet spot for graphic software in general).

It has been a huge help in my ability to think dimensionally and for a while I experimented with introducing it into the illustration workflow. I don’t do hybrid illustrations anymore, but I still use it for character maquettes, as well as another 3D software, SketchUp, for environment models.

I love your illustrations from the 100Kids challenge. Have you done other 100 illustration challenges? Why did you decide to create 100 different, fully rendered, child characters?

When I decided to knock on the door of children’s illustration I was emerging from a two-year project designing goblins. My portfolio was full of them: good goblins, evil goblins, old and young, male and females. It didn’t take a lot of insight to realize that it was a little one-sided. 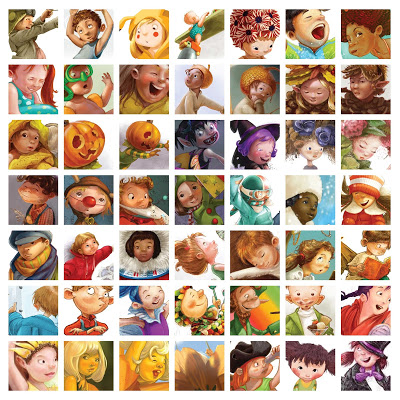 I knew that the number one thing a children’s illustration portfolio must include is children. At about the same time, I saw a video by Jake Parker talking about “design-100-thing challenges” and then the idea took flight. I decided to do full illustrations or vignettes rather than just sketches because I needed to beef up my portfolio and explore illustration styles.

Now, after nearly 70 kids, I am focusing more on stylization, so I sometimes post black and white work.

I had never done 100 illustration challenges before, but I am pretty sure I will start another one when this one is over. It´s a great experience, very impactful on many levels – and it got my social media channels rolling as well.

You’ve studied in Italy, Germany, Switzerland and the USA.


How has living and learning in multiple languages and cultures influenced your work?

They say “fish are the last to see water.”

I think it is the same here. When you experience a multicultural environment for a long time (actually from birth – my family is British-Italian), it’s part of you, as much as your handwriting and your gait – you don’t really notice it.

Laurent and Stephanie have paid me a wonderful compliment saying that my work appeals equally to European and American sensibility. If that is true, then maybe that is the biggest impact that living and working in different cultures has had on my work.

It’s especially nice since I was sometimes told (alternatively and by different people) that my work is either too “American” or too “European.”

At least now I can answer with some authority: “it’s both!”

My personal “Hall of fame” – the illustrators I look up to as my inspiration – live in all corners of the world.

I believe there is a common core in narrative illustration that transcends all cultural borders – storytelling is universal. 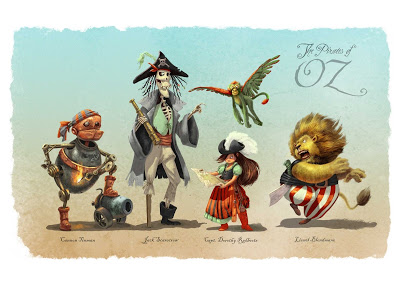 I’m drawn to The Pirates of Oz, please share more about this alternate version of The Wizard of Oz by L. Frank Baum (1900).

The illustration was done for an art challenge to design an alternate Wizard of Oz world. I came up with Dorothy as a pirate captain whose ship crash-lands in Oz during a storm. She hears about the fabulous treasure of the Wizard and sets out to loot it, collecting a motley crew of characters along the way – each declaring a pirate-y interest in gold, but in reality pursuing a private wish.

I never wrote the story but there is a couple of unfinished illustrations strewn around this idea. It has found a temporary home in “The Bin” – the notebook in which I confine all half-baked ideas.

Your short-story graphic novel, Inkling, is posted on your blog and you describe the project in terms of an exercise in form – inking, panels and storyboarding.


I’m very drawn to the story itself, a fascinating look at an artist literally creating his own reality with his art. What inspired this character and his experiences?

That is a truly personal story – it has many meanings for me. Narrative artists create a world with art – even if only for the space of a film, a book, a graphic novel or even a single vignette illustration.

It is a magic and mystical act, one that should be met with wonder and humility and a bit of fear – both as a viewer and as a creator. And which artist has not fallen in love with one of his characters at some point?

Also, more pragmatically, I love graphic novels and I want to create some for children. “Inkling” was much needed hands-on training, after many online courses and books. Maybe it will take more experiments before I tackle bigger projects in this space, but it certainly is a lot of fun! 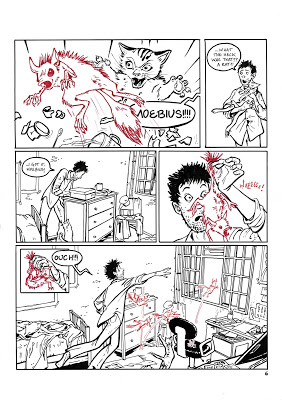 You made a dramatic career change – from research scientist to illustrator. How do you reconcile these two wildly different careers and what influence does one have on the other?

I definitely do not regret having gone into science first – it’s been a blast, and I would not be who I am without that section of my life. I have been through frazzled times, where I was leading two disconnected lives (for years I was working in a research lab during the day and struggling on my art school assignments at night).

Needless to say, many people (including me) have been puzzled by the decision to quit science for illustration and the impostor syndrome has been savagely rampant at times.

Now I sit on a boxful of ideas on how to combine science and storytelling and narrative illustration in new ways, and I am sure the two careers will end up joining forces and producing some interesting offspring.

I am afraid my habits are extremely unhealthy. I am addicted to books, audiobooks and animation films (at least I got clean of internet wormholes and managed to stay clean so far).

When I work, I live out of coffee and butter-spaghetti. I sleep too little and sit too much. I never learned to ski, skate or play team sports (I should get a token for every time I heard: “What? You live in Switzerland and cannot ski?”)

I’d rather stay indoors if the temperature is above 30 or below 10 Celsius (that’s 86 and 50 Fahrenheit) and my idea of fun is spending an afternoon sketching at a museum. Luckily, I am surrounded by wonderful people who take me as I am and yet coax me out of my comfort zone, so that I can get inspiration and stay healthy.

My family is the center of my life. So much so, that my studio is actually a family room – the potential distraction is a fair price for the energy and inspiration I get from being around my husband and children. My kids feed me countless ideas and make it worthwhile to go biking, hiking and horse-riding (and cook dinners.…occasionally).

I have friends who don’t think it boring to talk about books for half the night and have the privilege to work part-time in a creative team with great colleagues and designers, whom I constantly learn from. And of course there are all the magnificent people I have met on the web – a particular shoutout to the fellow author-illustrators I met virtually on the SVS forum and on social media.

I collect quotes from all sources and shamelessly sprinkle them in every conversation. So I cannot let this interview be finished without including one! This is by film director Werner Herzog:

“Ideas are like uninvited guests. They don’t knock on the door; they climb in through the windows like burglars who show up in the middle of the night and make a racket in the kitchen as they raid the fridge.”

Creativity for me has very much to do with getting to know the loud intruders in front of coffee and spaghetti and turn them into friends. It takes a lot of time and energy but it’s totally worth the effort. 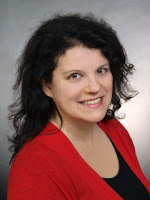 Her recent novel, The Safest Lie (Holiday House), was named a Best Book of the Year by The Guardian, a Notable Social Studies Book for Young People by the Children’s Book Council and the National Council for Social Studies, and was awarded SCBWI’s Crystal Kite.

Her plays have been produced in the EU and USA. When she’s not working or writing, you may find her hanging out with her family, trying new (vegan) recipes, or volunteering at the community theatre.