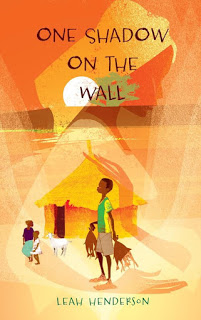 Leah Henderson is the debut author of One Shadow On the Wall (Atheneum Books for Young Readers, June 6, 2017). From the promotional copy:

An orphaned boy in contemporary Senegal must decide between doing what is right and what is easy as he struggles to keep a promise he made to his dying father in this captivating debut novel laced with magical realism.

Eleven-year-old Mor was used to hearing his father’s voice, even if no one else could since his father’s death. It was comforting. It was also a reminder that Mor had made a promise to his father before he passed: keep your sisters safe. Keep the family together.

But almost as soon as they are orphaned, that promise seems impossible to keep. With an aunt from the big city ready to separate him and his sisters as soon as she arrives, and a gang of boys from a nearby village wanting everything he has—including his spirit—Mor is tested in ways he never imagined.

With only the hot summer months to prove himself, Mor must face a choice. Does he listen to his father and keep his heart true, but risk breaking his promise through failure? Or is it easier to just join the Danka Boys, whom in all their maliciousness are at least loyal to their own?

The imagination of a child is unparalleled. They are willing to take journeys many adults are not. They have a critical eye and I love that they will question anything that doesn’t seem quite right. Young readers challenge writers to be better in ways most adult readers never could or would.

During a trip to Senegal, I saw a young boy sitting on a beach wall and wondered what his day might be like. 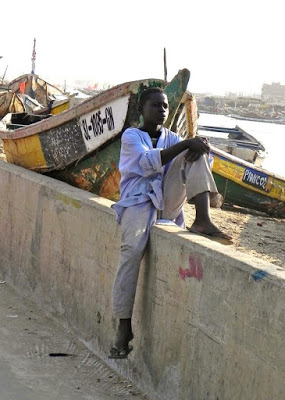 I had no idea at the time I would try to create a story out of that question. But all through the day, the image of that boy sitting tall on that crumbling wall stayed with me. And when I saw him again later, a short story started to form.
Of course I had no clue where it was going, but that didn’t matter. I was curious about his experiences that were probably so different from mine (though I did also wonder what might’ve been the same) and attempted to recreate a snippet of an imagined day.
It really wasn’t meant to go any further than the ten pages I ended up writing, but one of my graduate school professors read it and had another idea. Regardless of my doubts, she thought it should be a novel. And so the journey began . . .

The main challenge was believing I could tell this story about a boy and a circumstance I knew little about. I did not want to assume I knew this young boy’s life or what his dreams looked like.

I did not want to do harm. We have had enough of that in books already.
What would you have done differently?

The journey I’ve taken in creating this book, with all its pitfalls, frustrations, smiles, and tears, is the journey we were meant to take together.
But I do wish I could have whispered in my own ear long, long ago to trust the wonder of revision, to be kinder to myself about my writing, and to get out of my own way so the story could figure itself out. That would have been a tremendous treasure back then! 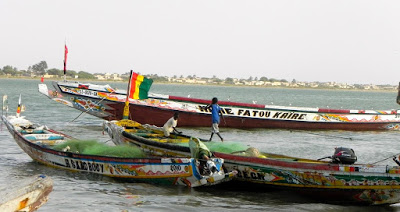 
I think more than anything I brought a level of compassion and fear to this project that some who have not seen themselves misrepresented in books time and time again might not understand.
I was overly mindful of the damage that could be done if I did not take the time to do the research, ask questions, and have people of the Senegalese community read my words.

Every day that I worked on this story, I reminded myself how important it is for kids who look, sound, and live like my characters do to be able to hold their heads high when they read my words or see someone else reading them. 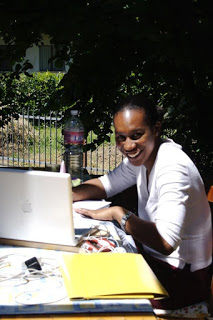 Writing can be a very solitary experience, so to instantly be a part of a community that understood what I was feeling—my apprehensions, my need to write, my love of stories—it was wonderful.

I didn’t have to explain to anyone why I stayed glued to my chair all day writing when no one was forcing me to. Or why I was picking out clothes for a character I had created in my mind (okay, sometimes I still had to explain that one), but for the most part, I entered into a community that instantly understood and welcomed me in.
The level of support, encouragement, and instruction I received was priceless. In a way, my experience gave me a (much needed) nod that it was okay to try and tell my stories.
Cynsational Notes
Kirkus Reviews said, “In her debut, Henderson paints a detailed picture of life in Senegal. The author’s experience, research, and sensitivity shine, making this distinctive novel a valuable addition to the literature.” 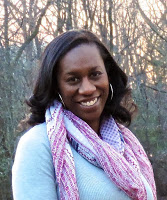 Leah Henderson has always loved stories—short ones, long ones, sad ones, funny ones, and all those in between.
When she is not frantically scribbling down the adventures of the characters jabbering in her head, she is off on her own adventures. Traipsing around the globe, venturing down meandering paths, soaking up the vibrancy of tantalizing souks and making lasting friendships.
Many of the hopes, struggles, and traditions she witnesses on her travels find a home in her stories and color her and her characters’ lives.
Leah holds a MFA in Creative Writing from Spalding University and calls Washington, D.C. home.