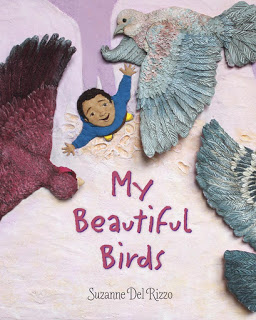 While a well-published illustrator, Suzanne Del Rizzo celebrates her authorial debut with My Beautiful Birds, which she also illustrated (Pajama Press, March 2017). From the promotional copy:

Behind Sami, the Syrian skyline is full of smoke. The boy follows his family and all his neighbours in a long line, as they trudge through the sands and hills to escape the bombs that have destroyed their homes. But all Sami can think of is his pet pigeons—will they escape too?

When they reach a refugee camp and are safe at last, everyone settles into the tent city. But though the children start to play and go to school again, Sami can’t join in. When he is given paper and paint, all he can do is smear his painting with black. He can’t forget his birds and what his family has left behind.

One day a canary, a dove, and a rose finch fly into the camp. They flutter around Sami and settle on his outstretched arms. For Sami it is one step in a long healing process at last.

What inspired you to write My Beautiful Birds?


The Syrian civil war has just entered its sixth year. My school-aged children had been asking about the conflict, so I went online to search up some child-friendly resources to share with them.

Being an often scary and unsettling issue, I wanted to ensure I approached the topic from an age-appropriate and safe way such that my kids would be left feeling empathetic and reflective yet informed.

I came across some good articles and information including a short article featuring a young boy who was raising a variety of wild birds in the Za’atari refugee camp. I thought to myself how important it was to have picture books that act as windows into the world, providing a safe opportunity for children to learn about other children’s circumstances and issues.

My Beautiful Birds was inspired by that little boy, his struggle with displacement and the universality I think all children have with their affinity to animals.

Displacement is something many children face, from forest fire evacuation, to moving house, to fleeing war, and the struggles they encounter to reacclimate can be very hard.
Likewise, all children, regardless of nationality, gender, or religion- they all love to play, learn and make new friends. It is my hope that these commonalities presented in My Beautiful Birds resonate with all children.

Once you wrote the story how did your writing group help you?

My writers group meets up about two times per month. They are a great group of talented ladies with diverse and extensive writing backgrounds and interests.

We are all about providing a friendly, encouraging environment with honest, thoughtful feedback (and sometimes yummy treats), so we can feel comfortable sharing our first awkward drafts, and know every comment and critique comes from a good place.
I read my first few drafts of this manuscript to my group (and two of my other writerly friends, Monica Kulling, and Lisa Dalrymple) and they critiqued it thoughtfully, pointing out niggle-y areas and offered great suggestions to help me strengthen my story.

Ann Featherstone, senior editor at Pajama Press, was my editor for this project. She lives in British Columbia, so although weren’t able to meet in person we talked over the phone or via email to discuss the manuscript.

We went through a few rounds of edits, to work out some areas that were initially a bit confusing. Ann was wonderful to work with as an editor. She was very open and helpful knowing this was my first time as an author-illustrator.

What are the similarities/differences in working with an editor versus an art director?


I found the experience to have more similarities than differences actually.
Doing edits on a manuscript feels, to me at least, quite similar to making art changes based on art direction. With each you are fine tuning your creation to best suit the project, and maybe because I am such a visual thinker, the words I write are so intertwined with my images in my head, it is hard to totally separate them.
I quite enjoy the collaborative approach with both editing/writing and art direction/illustrating as the brainstorming sessions of both leave me invigorated to create or tweak my writing/illustrations.
Editorial feedback or art direction really helps me to focus my ideas and it pushes me in unexpected directions that I might not have achieved on my own.

I wanted this book to not only depict beautiful and thought-provoking illustrations but I wanted to ensure that the artwork accurately and respectfully portrayed the Syrian people living in refugee camps.

Although I didn’t have to opportunity to travel to a camp myself, I did my best to research as much as I could from as many sources as possible to ensure I was informed and educated before beginning my illustrations.

My publishing team at Pajama Press and I were very deliberate in our decisions about how to depict the scarier moments, in the book. For example, in the pages depicting Sami escaping during the bombing of his village, we decided to put the village and plumes of smoke and fire in the background to give some visual separation from these images to ensure even the most sensitive of readers would feel safe and secure.

Artistically, because many aspects of the book speak to the main character’s connection with the sky and his birds, I chose to illustrate in a more painterly style to evoke this emotional connection on a subconscious level.
My art director, Rebecca Bender also suggested I used a limited colour palette, which I think worked very well. I envisioned sweeping desert landscapes and windswept clouds in colorful sunset or sunrise skyscapes, so I chose various shades of purple, violet, pinks, grey, and beige.
I used blue specifically in only two places: Sami’s hoodie and in the dove and pigeon.
Overall, I think the artwork compliments the text well, and together the interplay of the text and illustrations enhances the reader’s connection to the main character, his struggles, and his avian friends.

Please describe your illustration apprenticeship. How did you take your art from beginner level to publishable?

I suppose my illustration apprenticeship could be best described as unconventional and “immersive.”

I did not actually attend art school but I have taken various art classes throughout my life and as electives during my time at university where I earned a B.Sc.H in Life Sciences.
I have been creative and a “maker” since I was small. After leaving a job in medical science research to have my four children, I decided to make the switch to children’s book illustration. I had always loved sculpting and was particularity drawn to the books featuring dimensional illustrators like, Barbara Reid, Janette Canyon, Euginie and Kim Fernandes.
I immersed myself in picture books, poured through the wealth of awesome online kidlit resources while my kiddos napped, and joined SCBWI and CANSCAIP (Canadian Society of Children’s Authors, Illustrators and Performers). I worked away on my art until I felt I was ready to put together a portfolio and send out postcards to publishing houses. 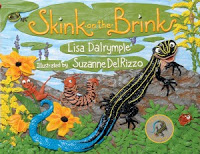 I still can’t believe how the stars aligned…only a few months after sending out my first postcard mailers (with fun bookmarks), I received a call and eventual offer from publisher and children’s editor, Christie Harkin at Fitzhenry & Whiteside to illustrate my first picture book, Skink on the Brink, written by Lisa Dalrymple (Fitzhenry & Whiteside 2013).

How has your style evolved over time?

One thing that I greatly enjoy about each picture book project is exploring and finding just the right mix of mediums to best illustrate that particular project.

Maybe I’m getting a bit braver in my approach, with each new book, I hope so. I just love the interplay of different materials and the visual textures that come about.

With Gerbil Uncurled, by Alison Hughes ( Fitzhenry & Whiteside, 2015) since the book centered around a family of gerbils, I used real wood chips and nibbled papers along with plasticine in my illustrations.

In Sky Pig, by Jan Coates (Pajama Press, 2016), I incorporated actual watch gears, cogs, map papers and real milk-weed fluff into my illustrations- so fun!
In My Beautiful Birds, as I mentioned previously, I wanted to use a more painterly approach, due to the subject matter.
I experimented with polymer clay, which looks pretty much like plasticine but has one major difference- it can be hardened by baking it.

For this project I created my illustrations in polymer clay, baked them in the oven to harden them, then added paint or glaze treatments overtop to create depth, and simulate the dusty conditions of the Jordanian desert.

I also incorporated hand-painted art from my children and their friends for the mural illustration near the end of the book. I set them up at the kitchen table with their art supplies and gave them the prompt: “how would you feel if you had to leave your home and all that you love?”

These fabulous painting are also featured on the endpapers of the book. I scanned each painting then worked out the overall mural image in Photoshop, next I printed it out on t-shirt transfer paper, pressed it onto raw, thin sheet of polymer clay and baked the whole thing to transfer the image.

This technique was also used for the kites and smaller children’s artwork throughout the book. 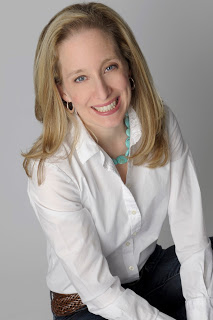 Suzanne Del Rizzo began her career in picture books as the illustrator of Skink on the Brink, written by Lisa Dalrymple. It won the SCBWI Crystal Kite Award for Canada and was shortlisted for the 2014 Rainforest of Reading Award.

My Beautiful Birds has been named a Junior Library Guild selection for 2017 and received a starred review from Quill and Quire.

The Horn Book said, “Del Rizzo uses polymer clay and acrylic paint to create vibrant pictures of Sami, his family, the refugee camp, and the swirling pink-and-purple sky. Most of all, she creates birds for which every feather and color looks real. Beauty and sorrow sit side by side in this compassionate and age-appropriate depiction of contemporary refugee life.”

Pajama Press has a complimentary teachers guide for My Beautiful Birds, along with additional resources for learning more about the Syrian crisis.

Suzanne lives with her four children and husband in Oakville, Ontario.