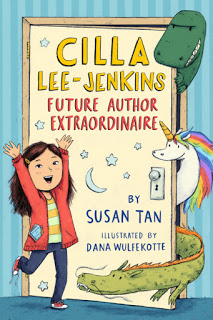 Not So Simple by Susan Tan from CBC Diversity. Peek: “Then came a question on race…. I quickly found my answer and carefully chose my spot—halfway between the group of students who identified as white and the group who identified as Asian….I was shocked when my teacher disciplined me in front of the class…chastising me for choosing two groups when her survey allowed her to tick only one box.”

Gene Luen Yang Comic Available for Download by Kathy Ishizuka from School Library Journal. Peek: “To share this graphic lesson on empathy with the greater community beyond our subscribers, we’re pleased to provide a high-res PDF version. It’s freely available to download and use, with Mr. Yang’s kind permission.”

On Impractical Urges by Ayana Mathis from Guernica. Peek: “Why would the nation rally against a government that didn’t support public schools, social programs, or make any attempt at improving the conditions of poor and black folk when every available representation of those people showed them to be irremediably degenerate? And what were we—young black people raised on a steady diet of images that showed us as unworthy, ugly, peripheral—to think of ourselves?”

Outlandish: Braving New Perspectives Through Books in Translation by Elizabeth Bird from School Library Journal. Peek: “But the fact of the matter is that talking about diverse children’s books goes above and beyond the familiar. Sure we need windows and mirrors, but don’t those windows need to look out at something besides our own backyards?” See also, Even More Outlandish: Further Thoughts on the Role of Translation and Children’s Literature.

With This Publisher, Native American Superheroes Fly High by Megan Kamerick from All Things Considered. Features Jon Proudstar, creator of Tribal Force (Mystic Comics, 1996), the first comic featuring a team of Native American superheroes. The series is being rebooted by Native Realities Press. Peek: “These are things that we face in our community and we still need superheroes…. We need people that are going to be there to be protect us, that are going to be there to help us out.” 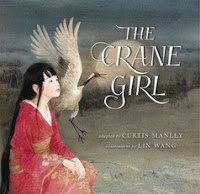 Writing Haiku with Curtis Manley, Author of the Crane Girl by Keilin Huang from the Lee & Low Blog. Peek: “Keeping notes of what you’ve been doing (whether in journal format, as lists, or as poetry) might lead to a poem that means something to you. Sometimes when you are writing, your thoughts will go off on a tangent that you didn’t expect; when that happens, keep writing and see where you end up!”

The Social Model of Disability in the Children’s Area by S. Bryce Kozla from the ALSC Blog. Peek: “…people who subscribe to this model operate with the assumption that if quality of life is reduced for disabled people, it is due to a world that has been designed without us in mind. People who understand disability through this lens acknowledge that there is a lot society can do to break down barriers to a quality life as a disabled person, and each disabled person does not need to be fixed.” Note: approximately 20 percent of the population has at least one disability.

Marianna Baer and The Inconceivable Life of Quinn by Lisa Doan from the VCFA Launch Pad. Peek: “Quick fact: I have a Word file titled ‘Deleted Scenes’ for this book that is 64,675 words long. And that is only one of three files of deleted material!”

Interview: Gary Golio by Edi Campbell from Crazy QuiltEdi. Peek: “When most people think of Billie, they think of her talents and her troubles. But she was also a very courageous person, and her singing of ‘Strange Fruit’ proves that. She was insulted, assaulted, spat upon and shunned because she championed a song about lynching, and she served the message of that song until the end of her life.”


Penny Parker Klostermann Finds Ideas in the Clouds from The Booking Biz. Peek: “My inspiration comes from opening my imagination to characters, situations, or settings…I have always loved that book (There Was an Old Lady Who Swallowed a Fly) and hoped I could come up with a character who would be as much fun as the old lady. One day this was on my brain and I was walking before sunset. I saw a cloud that looked just like a dragon. It was beautiful. I thought about a dragon and all the fun things he could swallow.” 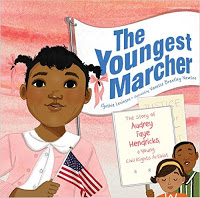 Member Interview: Cynthia Levinson from Austin SCBWI. Peek: “There are two things that feed my work—curiosity and deadlines. The former amounts to my antennae. I’m always listening and reading for possible stories to delve into. And deadlines keep me rooted to my desk.”

10 Year Celebration and a Fond Farewell by Lorie Ann Grover from Readergirlz. Peek: “In light of the ease and accessibility today to find, follow, and enjoy connections between authors and readers, the co-founders, divas, and support team are returning to their own work fully, ending readergirlz…..The readergirlz website will be active through the end of 2017. The blog is complete, archiving our past, and it will remain accessible but not active.”

Casting the Spell by Donald Maass from Writer UnBoxed. Peek: “From the darkest horror to the frothiest comedy, novels can immediately put us under a spell but too often they don’t. The voice relating the tale is far off, timid, or false; a huckster’s voice selling us a sideshow trick or the phony intimacy of a presumptuous stranger.”

Can Acting Make You a Better Writer? by Nick Cross from Notes from the Slushpile. Peek: “You can write without being fully engaged, but it’s unsatisfying and very stop/start, because the rational side of your brain keeps interrupting the creative side. Drama and acting forces you to be directly in the moment, to go with your gut instinct and to improvise.”

4 Freelancing Myths That Are Holding You Back by Linda Formichelli & Diana Burrell from Jane Friedman‘s blog. Peek: “Location may be all-important in real estate, but you’re selling ideas, not land—and ideas can be written about from anywhere. Stop worrying that you can’t make it big as a writer if you’re not in New York. You can succeed in writing from anywhere, except if you’re totally off the grid.”

Is Your Fiction Big Enough by James Scott Bell from Writer UnBoxed. Peek: “There are techniques that apply to the things we can do, and others that help us identify things we ought to avoid. I call this latter group ‘speed bumps.’ The reader may not notice them consciously, but in subtle ways they interrupt the fictive dream.”

What’s an “objective correlative,” huh? by A.B. Westrick from A.B. Westrick’s blog. Peek: “The essence of the technique is this: in order to communicate to readers what your character might be feeling, describe an object, situation, or set of circumstances that correlates with the character’s emotion. Don’t identify the emotion; let the reader infer it.”

Hidden Emotions: How to Tell Readers What Characters Don’t Want to Show by Angela Ackerman from Writers Helping Writers. Peek: “One of the struggles that comes with writing is when a character feels vulnerable and so tries to hide their emotions as a result…. But where does that leave writers who still have to show these hidden emotions to the reader (and possibly other characters in the scene)?” See also, The Efficient Writer: Using Timelines to Organize Story Details.

Submitting to Literary Agents Who Have Already Rejected Your Work by Mary Kole from KitLit.com. Peek: “Agents do remember people who’ve submitted to them, even a few years on. Most use email inboxes that make your previous submissions easy to find. And if you’re submitting to them and you have a history of previous submissions, you do want to mention that they’ve previously seen your work in your query.”

Writer Shame vs. Writer Guilt by Erika Robuck from Writer UnBoxed. Peek:”If you are a writer, rejection is a certainty. Every single writer at every single step of the process has and will experience it….Those authors who make a career out of writing aren’t necessarily more talented than unpublished writers, but they are more stubborn. More positively: they adapt and move on. They understand rejection is not personal, or the work isn’t ready, or the timing isn’t right.”

Wild Rumpus Named 2017 PW Bookstore of the Year by Judith Rosen from Publishers Weekly. Peek: “For the first time since the PW awards were launched nearly 25 years ago, a children’s bookstore has been named winner by a panel of industry judges. Wild Rumpus Books in Minneapolis….is celebrating its first quarter century in 2017….”

Hints from the Pros: More Book Tour Tips by Greer Macallister from Writer UnBoxed. Peek: “Always, and I really do mean always, check the spelling of every name before you inscribe. Even the most innocent and simple-sounding names have improbable variations – and the most surefire way of coming across these is to launch into the dedication without checking first.” And, “Always use your own pen to sign books. Other people’s pens are covered in other people’s germs.”

How You Can Save Federal Funding for Libraries & Help Teens from the Lee & Low Blog. Peek: “…through IMLS (Institute of Museum & Library Services), every state, the District of Columbia, Puerto Rico, and the U.S. territories receive funding to support their state’s libraries and museums. In FY14 the total funding IMLS distributed to states and territories was $154,800,000.” See also, YALSA’s Advocacy page for more action items.

It’s a whirlwind, author-speaker weekend as I’m giving keynotes a the 33rd Annual Virginia Hamilton Conference at Kent State in Ohio and The Color of Children’s Literature Conference, sponsored by Kweli Literary Journal at the New York Times Conference Center in Manhattan.

A challenge to speech preparation is doing enough so that you’re ready but not so much that you blow out your voice.

I focused on finishing the text and PowerPoint presentations last weekend and then tweaked while rehearsing each speech once a day on Monday through Wednesday.

Meanwhile, the YA novel in progress is largely on hold. But not completely.

I’ve been adding about 150 words a day from notes that came to me as I was falling asleep. I text them to myself in bed, which isn’t great for shut eye, but there’s something about the connections the mind makes in that hazy in-between place.

Those 150ish words are snippets of dialogue, brushstrokes of setting or secondary character development. They don’t always fit anywhere the next morning, but they’re worth recording to try.


I always learn things while editing and formatting each week’s Cynsations posts, but this week particularly resonated with me. 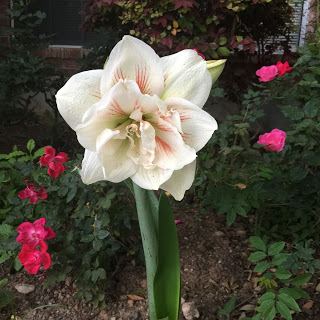 Amy Krouse Rosenthal’s advice to notice and appreciate the little things and the incredible detail of Suzanne’s feather illustrations inspired me to slow down and savor my hot tea, the amaryllis blossom in my flowerbed and the elegance of words on the page.

As a Writer Mama, Bethany’s balancing strategies hit home, and were echoed by Mike’s discovery of “the 25-minute gap between when the last kid left for school and before I had to race out the door for work.”

For many years I slipped writing time into the crevices of my life, between a day job, numerous volunteer commitments and family obligations.

Now I revel in putting it front and center. In fact, my writing meet-up this week stretched from our normal two hours, into almost five.

I’ve discovered my family doesn’t really care if the laundry gets folded later, or if dinner ends up being a salad rather than a time-consuming effort involving a main dish and two sides. I smile more, and they like that a lot!

Also happy to report that I’m now an official member of the Texas Library Association and am looking forward to the upcoming conference.