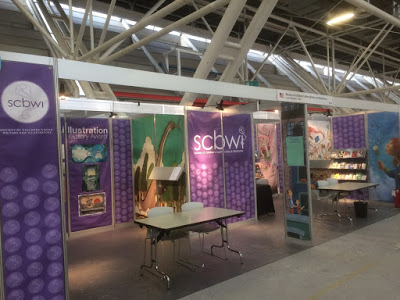 Every second year the SCBWI hosts a booth at the Bologna Book Fair…the biggest children’s books exhibition and rights fair in the world. It’s all about rights and networking and for SCBWI members who are at Bologna a home away from home!

Bologna, with its five halls of publishers and their books, can be mind boggling for the first-time visitor.

This year the SCBWI hosted a spectacular booth with eye-popping panels, and it was double the size of our previous booths. We were able to showcase our PAL member’s books along with information on the rights available for each; to hold portfolio critiques; and display the finalists (and hold public voting) for our Bologna Illustrator’s Gallery in a comfortable and very appealing environment.

The digital catalogue and also the Bologna Illustrators Gallery are now online, embedded in the SCBWI Bologna site showcasing our members’ works to the world.

Our Dueling Illustrators was also once again a huge hit!

For an inside look at the 2016 Bologna Book Fair check out:

and the Publishers Weekly article.

Already planning has begun for our next SCBWI Bologna appearance which will be in 2018. Once again we will have our Bologna Illustrators Gallery contest, the digital catalogue of all the PAL books displayed, portfolio critiques, as well as a whole lot more.