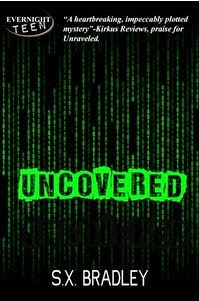 Last year sixteen-year-old Autumn solved her sister’s murder. This year, she is part of a high school forensic dream team that assists the police when teens are kidnapped.

When it’s discovered the kidnappings are part of a secret online survivor game, the police and team focus on the game maker-the man behind the game.

The focus of the investigation shifts when Autumn is singled out and becomes the target of the Game Maker’s sick game.

Through encrypted messages hidden in steganographs, Autumn must discover who the last kidnapping victim is if she hopes to save him in time.

S.X. writes: “As a Mexican-American writer, I’ve very proud to continue Autumn’s story. She’s a smart, driven Hispanic teen that wants to make her own path in life. My hope is that young Latinas will draw inspiration from Autumn.”