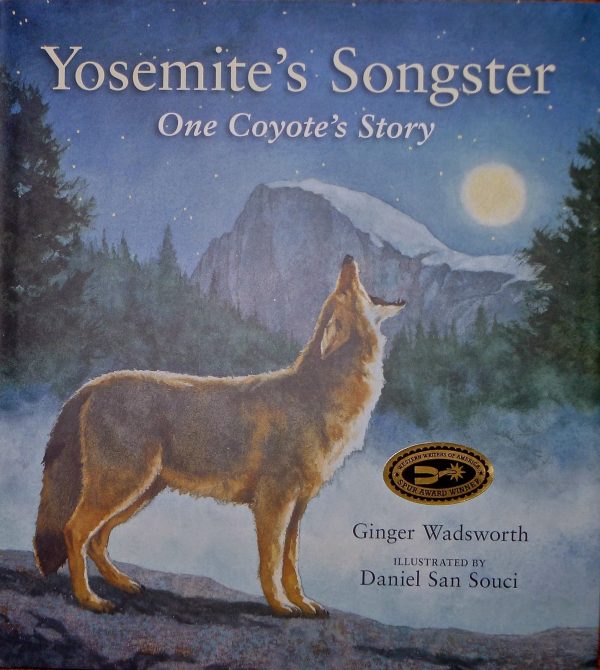 A sudden rockslide in Yosemite Valley in California’s Sierra Nevada separates Coyote from her mate.

Readers journey throughout the valley observing its many famous landmarks on four paws with Coyote. You’ll explore both the natural world and the human world with one’s nose leading the way.

Who or what inspired you to write this story?

Illustrator Dan San Souci and I have known each other for years; we’re both part of the San Francisco Bay area community of children’s book authors and artists.

At an informal party, Dan and I chatted about writing a book together, specifically about a coyote in Yosemite National Park. Dan, along with his brother, Bob, had already written several books for the park, including their Two Bear Cubs, a Miwok Legend from California’s Yosemite.

I’ve visited Yosemite National Park my entire life as well as many other parts of the Sierra Nevada. In fact, I try to explore the park every year. Dan is just as familiar as I am with this amazing natural wonder.

We both agree that working in California’s Yosemite National Park, doing research in the library there or hiking the trails with a camera, binoculars, or art supplies, is almost like cheating. To be allowed to work in this gorgeous setting is a gift.

Besides, who wouldn’t want to work with Dan San Souci? His art is breathtaking! I said “yes,” and the rest is history!

How did you come up with a story line?

During one of my stays in the park, I took a nature walk with Ranger Shelton Johnson. We crossed Stoneman Meadow on one of the protective, wooden boardwalks.

We were a multicultural group and didn’t need to communicate with one another when Ranger Johnson pointed out famous rock formations or falls, or had us cross arms across chests to bang gently against one another to demonstrate how glaciers are formed.

At one time, when most of the group was looking up, I was peering into the meadow. A pair of pointed ears was moving through the grasses. Every so often, a coyote leaped high to pounce on something. It was “mousing” – hunting for an afternoon snack of field mice.

And so my story was born . . . of this wild dog that shares the park with us . . . and vice versa, yet we seldom notice one because we’re so caught up in taking pictures of granite walls and waterfalls. I’m just as guilty as the next person!

I set my story in the Yosemite Valley because that is where most first-time visitors come. They seldom step beyond the valley in their typical one-day explore. There are many iconic spots in the valley—the wedding chapel, the Merced River, Half Dome, the Ahwahnee Hotel, Bridalveil Fall, and more—and I wanted to include as many as sites possible.

I am familiar with Dan’s work, and I hoped that my story would offer him a smorgasbord of possible images. After seeing his first images, I was “blown away” by what he captured with his watercolors. I recognized almost spot he painted!

What was your biggest challenge in writing this book?

The book is published by the Yosemite Conservancy, a nonprofit organization devoted to educating visitors about the world that is Yosemite National Park. I could not anthropomorphize the coyote in any way, and I had to be scientifically accurate. I also had to be willing to make changes to reflect the philosophy that the Park Service wants to portray. That meant that the manuscript (and Dan’s art) was reviewed for accuracy by the National Park Service staff.

For example, coyotes are natural scavengers, and in the park they occasionally eat human food. I’ve seen them raid overflowing garbage cans, so I mentioned that in the text.

The staff works hard, with signs and handouts, to remind visitors that coyotes, bears, and all other wild animals should find and eat their natural food. After my reviewers asked me to revise that section, I took out the raiding of garbage cans. I even corrected the name of a pine tree I’d misidentified, and I’m most grateful that other eyes looked for errors.

Would you tell us about winning the Spur Award? 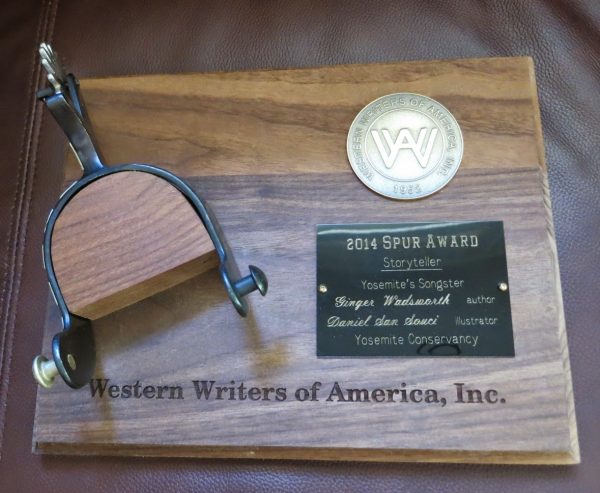 Last spring I stayed in the Anza-Borrego Desert in Southern California, where I own a one-room cabin in an isolated canyon. It’s a perfect spot for this writer to concoct stories, photograph passing coyotes, or even go out and howl with them on a warm desert evening.

I have a well, electricity, and my cell phone sometimes works. Someone from the Western Writers of America called me to say that Yosemite’s Songster: One Coyote’s Story earned the 2014 Spur Award in Storytelling, the best illustrated children’s book. I was to receive a Spur Award for the text, Dan San Souci for the art, and the Yosemite Conservancy for being the publisher.

I’ve been a member for many years, and this past June, I attended the Western Writers of America’s annual conference in Sacramento, California. Belinda Lantz from the Yosemite Conservancy and Nicole Geiger, my editor, joined me at the WWA banquet where I received my Spur Award.

I spoke about the honor of receiving this award that has an actual spur mounted on the plaque. I was thrilled with the award’s description of “the best storytelling for children in a 3,000 word book.”

After all, isn’t that what each of us strives for every single day? 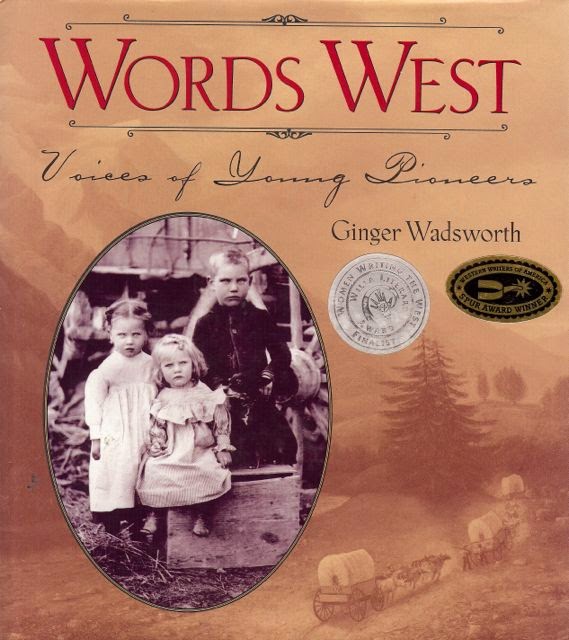 It was my second Spur Award. Ten years ago, I earned one for Words West: Voices of Young Pioneers (Clarion) in the category of juvenile nonfiction. I dedicated my 2014 Spur Award to the memory of my father, Hal G. Evarts, Jr., a founding member of Western Writers of America, and a prolific author of books about the west.

In fact I am the third generation of writers of the west. I never met my grandfather, Hal G. Evarts, Sr.,who wrote books that first appeared in serial format in many of the “big slicks,” magazines including the Saturday Evening Post, Colliers, and The Red Book.

My Spur Awards hang in my office, over an original painting by Dan San Souci from Yosemite’s Songster: One Coyote’s Story. It’s a stunning night image of a coyote howling at Half Dome.

Yosemite’s Songster: One Coyote’s Story has been approved for a second printing! In the meantime Dan and I are under contract to write a second book for the Yosemite Conservancy. Think Sierra black bears that live in around Yosemite National Park. It’s due out in the fall of 2016. I’ve been doing research this summer; Dan will step in once the text is accepted. We have lots of ideas for future park-themed books.

I have two Golden Retrievers, Scout, and Willa. My third dog, Oreo, is a young, miniature poodle mix. Most of the time, Willa, Scout, and Oreo join me in my office, lying under my desk while I write.

Willa and Scout are trained therapy dogs. I take them into libraries and schools where elementary-aged children read to dogs as part of national program called R.E.A.D. Our local name is “Paws to Read.”

Oreo and I are in dog school every Wednesday night. We’ll see if he can settle down and earn his therapy dog certificate.

Helping children improve their reading, courtesy of my dogs, is a perfect extension of my writer’s hat.

Ginger Wadsworth is the award-winning author of over 25 nonfiction books for young readers.

Biography subjects are John Muir, Rachel Carson, Benjamin Banneker, Cesar Chavez, Julia Morgan, Annie Oakley, Laura Ingalls Wilder, and others; books with western American history themes including Words West: Voices of Young Pioneers (Clarion); and natural histories titles about the desert, rivers, sequoias, and spiders that include Up, Up, and Away (Charlesbridge).

Her most recent books are Camping With the President (Calkins Creek); First Girl Scout: The Life of Juliette Gordon Low (Clarion); and Yosemite’s Songster: One Coyote’s Story (Yosemite Conservancy).

She lives in Northern California with her family.