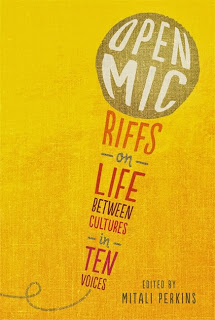 Excerpted from the introduction to Open Mic: Riffs on Life Between Cultures in Ten Voices, edited by Mitali Perkins (Candlewick, 2013).

Humor has the power to break down barriers and draw us together across borders. Once you’ve shared a laugh with someone, it’s almost impossible to see them as “other.”

Poking fun at my own marginalized life also sets readers free to see the funny in their own lives, a key to surviving the stressful experience of becoming an adult.

I do have some ground rules, however, for what I consider good humor, especially in a tension filled arena like race.

Here they are, take them or leave them: 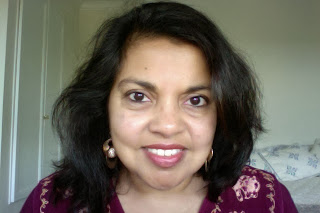 1. Good humor pokes fun at the powerful—not the weak. Using a gift of wit to pummel someone less gifted physically, socially, emotionally, or intellectually may win a few initial laughs. Soon, though, audiences sense the power flexing of a bully behind the humor, and they’ll stop listening.

The most powerful person of all, of course, is the storyteller (see rule #3), so no holds barred when it comes to humbling that target.

2. Good humor builds affection for the “other.” At the close of a story, poem, or joke about race or ethnicity, do we feel closer to people who are the subject of the humor? If not, even if the piece is hilarious, it’s not good funny.

Sometimes comedians use wit to alienate the “other” from us instead of drawing us closer to one another. Again, they may get a few laughs, but they’re cheap laughs. Of course, I don’t like any humor where someone gets hurt—I rooted for Wily Coyote, winced at the Marx brothers’ physical (painful) humor, and stand stony-faced while my sons guffaw over videos of people falling and crashing into things.

So take rule #2 with a caveat: if watching someone take a hit or a blow makes you like them better, you might appreciate some humor that I don’t. And that’s okay.

3. Good humor is usually self-deprecatory (note: not self-defecatory, although it can feel like that). While I usually don’t like edicts about who can write about whom, in a post-9/11 North America where segregation, slavery, and even genocide aren’t too far back in history, funny “multicultural” stories work best when the author shares the protagonist’s race or culture.

Funny is powerful, and that’s why in this case maybe it does matter who tells a story. Writing that explores issues of race and ethnicity with a touch of humor might need to stay closer to memoir than other kinds of fiction on the spectrum of storytelling.

Some writers and comedians have succeeded in poking fun across borders, but it’s challenging for most “outsiders” to tell jokes about “insiders” in today’s mine-filled conversations about race.

Go ahead if you want to try, I tell them, but don’t say I didn’t warn you. And as for who gets to be an “insider”—well, that’s a whole other discussion where I hope to listen and learn.

Okay, enough with the rules. In Open Mic, we tried to provide lighthearted storytelling about the between-cultures life. I’m thrilled about the authors who contributed to this anthology. 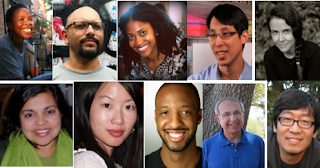 Gene Yuen Yang’s “Why I Won’t Be Watching The Last Airbender Movie,” Olugbemisola Rhuday-Perkovich’s “Confessions of a Black Geek” and Naomi Shihab Nye’s “Lexicon” make us feel like we’re exchanging a knowing glance of shared humor with the storyteller or poet—much like viewers feel when cast members on popular sit-coms catch the camera’s eye for a moment.

All in all, it’s a start. As the conversations continue, and laughter fills the room, we’re hoping that others will step up to the mic. Share your “between-cultures” funny story on our facebook page.

Mitali recommends Craig Ferguson’s monologue about Britney Spears with regard to using humor about the powerless.