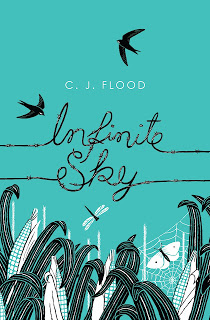 C.J. Flood is the first-time author of Infinite Sky (Simon & Schuster U.K., 2013). From the promotional copy:

Iris Dancy’s free-spirited mum has left for Tunisia, her dad’s rarely sober and her brother’s determined to fight anyone with a pair of fists.


When a family of travelers move into the overgrown paddock overnight, her dad looks set to finally lose it. Gypsies are parasites he says, but Iris is intrigued. As her dad plans to evict the traveling family, Iris makes friends with their teenage son. Trick Deran is a bare-knuckle boxer who says he’s done with fighting, but is he telling the truth?


When tools go missing from the shed, the travelers are the first suspects. Iris’s brother, Sam, warns her to stay away from Trick; he’s dangerous, but Iris can no longer blindly follow her brother’s advice. He’s got secrets of his own, and she’s not sure he can be trusted himself.


Infinite Sky is a family story about betrayal and loyalty, and love.

I am very surprised to be debuting in 2013, though it has taken a fair while to get here. I started writing seriously after graduating in Cornwall. I was 21 and it was 2004. A friend encouraged me to submit something to the creative writing pages of a local magazine she edited, and when it was selected to be published, I immediately wanted to repeat the process. I was addicted to seeing my name in print.

For the next few years, I wrote short stories and poems and submitted them to lots and lots of different places, obsessively checking my emails to see if I had any rejections (always lots) or acceptances (increasingly some). This led to reading at magazine launches, and meeting other writers, and beginning to share work and get feedback.

I didn’t exactly keep the faith at this time, but I did keep writing. Partly because it was a compulsion, partly because it was an outlet for my creativity which wasn’t used at all in my work (waitressing/carework), and partly because I was desperate to change my situation. My then-boyfriend took himself seriously as an artist, and some of that rubbed off on me too. Most of my friends were in a similar position, working jobs they didn’t love to earn money to survive until they found their feet in sculpture or photography or illustration. We were all in it together.

This went on for a few years until I was 26. I had been toying for a while with the idea of doing an MA in Creative Writing, but the application process put me off, and I wasn’t sure I was good enough to get in.

Finally, after seeing a good friend of mine successfully place at the University of East Anglia (sort of like the UK’s Iowa Writers’ Workshop programme) I decided to apply. I didn’t apply anywhere else for some reason. Luckily, I got in. A few months later, I packed up all my stuff, and moved away from my beloved Cornwall to Norwich.

During this year, I learned so much about writing. At the same time as I had applied to UEA I had applied for the Jerwood/Arvon Mentoring Scheme – a year’s mentoring with a successful writer – and a few months into the course, I found out I had been successful. I had even more support for my writing! For the first time ever, I could prioritise it over everything else. I was surrounded by people who were focused on getting better. Every week there were workshops and chats and readings. Life revolved around writing, and it was wonderful. Not surprisingly, during this time, my writing developed enormously.

Towards the end of the MA, we had meetings with agents and publishers, and an anthology of our work was sent out to industry professionals. We had a showcase of our work in London and Norwich. The combination of these three things led to me signing with my dream agent, Catherine Clarke, and a year after finishing the course, my book sold to Simon & Schuster, U.K. and Arena, Germany, at auction.

I knew that the UEA course could work this way for students, but I didn’t expect to be one of them. Because of the speed at which things happened in the last couple of years, after very little happening at all for the first seven, I still find it surprising.

To some extent, Iris’s voice did seem to come almost by magic, and I think this was due to my surrounding myself with the world of the novel. Because Infinite Sky is set in the house where my dad still lives, I could literally do this. I wandered the fields and ran around the yard and sat by the brook, and it brought back so many memories of my teen years. I realised how much a part of me that landscape is, and how much I love it, and I think that comes through in Iris’s voice.

Another thing that made it seem fairly easy, was the fact that Iris is a sort of idealised version of me at thirteen. I know her very well!

Still, it took a long time to get her voice just right, and I did do some exercises. Mostly, I freewrote. I would try to empty my head, and get into an almost trance-like state in which I was barely critical, and then write whatever struck me about the novel. I would write about what Iris thought of her mum leaving, how she felt about her older brother, what she thought of Silverweed Farm falling into disrepair.

As for listening to young people, I am always trying! They have such excellent conversations! However, because of the classic feel I was aiming for with Infinite Sky, I didn’t use any contemporary slang or youth talk, so all my earwigging was just for fun.

So, yes, a combination of freeing my inner teen, freewriting and visualisation worked really well for me when writing my first novel.