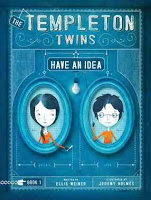 Check out the book trailer for The Templeton Twins Have an Idea by Ellis Weiner, illustrated by Jeremy Holmes (Chronicle, 2012). From the promotional copy:

The Templeton Twins Have an Idea is a hilarious middle-grade novel about
12-year-old John and Abigail, their inventor father, a ridiculous dog,
and the sarcastic Narrator who tells their story.

In this first book in
the series, The Templeton Twins have to escape the dastardly Dean twins,
who have kidnapped them in order to steal their father’s inventions!