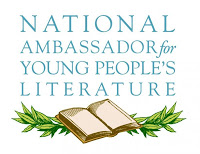 Walter Dean Myers is the New National Ambassador for Young People’s Literature from the Library of Congress. Peek: “…created to raise national awareness of the importance of young people’s literature as it relates to lifelong literacy, education and the development and betterment of the lives of young people.”

SLJ Exclusive Interview: Walter Dean Myers, the New National Ambassador for Young People’s Literature by Debra Lau Whelan from School Library Journal. Peek: “I would like to continue my work in juvenile detention centers. If I could, with the help of Jon and Katherine and the legion of other writers out there, convince America that I was very much like the kids in the juvy prisons, and that I was truly saved by reading and by books, I feel I could change the country.”

Children’s Book Envoy Defines His Mission by Julie Bosman from The New York Times. Peek: “As an African-American man who dropped out of high school but built a successful writing career — largely because of his lifelong devotion to books — Mr. Myers said his message would be etched by his own experiences.”

In the video below, Walter Dean Myers reads a selection from We Are America: A Tribute from the Heart, illustrated by Christopher Myers (HarperCollins, 2011).

Father-son team Walter Dean Myers and Christopher Myers discuss their latest book, We Are America: A Tribute From the Heart.