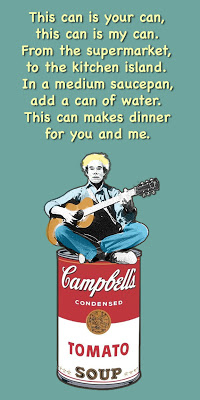 What could these two possibly have in common?

My friend and neighbor, John Hannah, was so amazed that I’d chosen such seemingly diverse subjects for picture book bios that he concocted this image (right) which appeared in my mailbox one day and has kept me laughing ever since.

Why Andy Warhol? The discrepancy between the perceived and the reality maybe. The persona he created for himself. His sly “honesty”. The fact that he’d pay friends for ideas. His wit as showcased in The Philosophy of Andy Warhol : (From A to B and Back Again) (1975).

I first read Warhol’s Philosophy while living in New York in the late ‘70s and I’ve been quoting, and living by his “three rules” since—

Okay, I’m not so big on the last one, but the first two work beautifully!

His overall philosophy, difficult childhood, and the fact that he illustrated shoes for years made him an incredibly appealing subject. Also I’d worked in theatre in New York and was cast in a play at Actors Studio by Taylor Mead, a Warhol superstar. A fascination with “all things Warhol” took hold.

A few centuries later, I hunkered down to write a picture book bio on pop art icon. I started writing, then realized it couldn’t be done. Down it went to the basement dead file. The next year the three rules started buzzing in my brain again and I brought the manuscript back upstairs from the basement. After a few months in the live file, it went back to the basement.

This went on for a very long time, and then one day I realized it wasn’t necessary to tell the story of his entire life.

We could begin and end with him at Max’s Kansas City eating chick peas and the rest of the story, childhood to Max’s days, would be a flashback. At that point, I began writing in earnest and the manuscript never went to the basement again!

The next question was the art. My editor, Christy Ottaviano, and I agreed that we wanted something edgy but not imitative. I was teaching art at the time, and some of my students were experimenting with a photo transfer method which I adopted and adapted for the illustrations.

It’s an acrylic transfer method that can be found on various websites and involves a lot of washing off of paper. One day while the images were drying it struck me how odd it might look to a passerby to see a bunch of paintings on a drying rack. 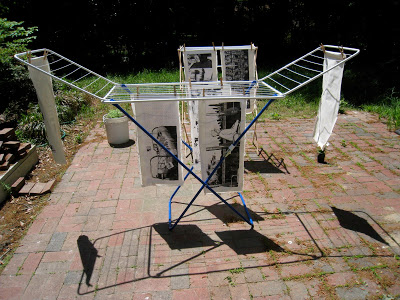 Then there was the question of rights to reproduce Warhol’s work. The cost of the number of images needed would have been enormous, so I did what Andy would have done – copied. Marilyns, flowers, soup cans, cats, money, all the “Warhol” paintings in the books are copies, a fact acknowledged on the copyright page.

So that’s some of the story of Fabulous! A Portrait of Andy Warhol (Christy Ottaviano Books/Henry Holt, 2001). And here are a few interior pages. 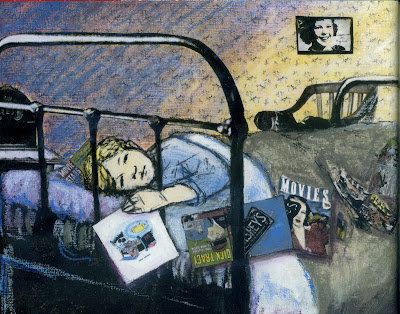 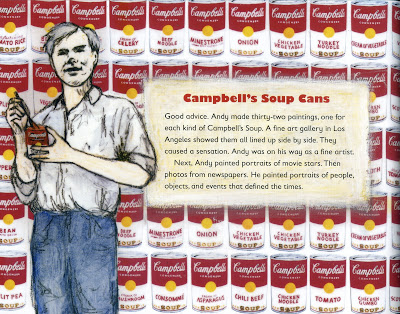 A number of surprising facts are included in the author’s note, including the fact that Warhol sometimes worked at a soup kitchen. Yes, he had a social conscience!

Let’s give the once poor boy from Pittsburgh the last word.

“America is really The Beautiful,” Warhol said. “But it would be more beautiful if everybody had enough money to live.” 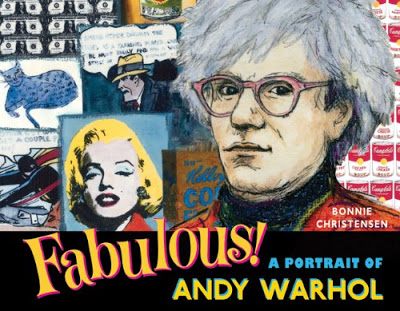